A pair of mountain lions appeared in front of my trail camera. They were on the edge of a large meadow probably hunting for deer or elk. They were very curious about a scrape. As they sniffed it, they began rubbing their heads together. It was a sweet sight in our apex predator.

I think that this pair was a mother-daughter team. The daughter is probably a year or older. Check out the video to see this bonded pair.

There's so much good in a day at Lab Valley.

One of my favorite things is that we can see the sunrise from our windows. We usually wake up before it's light. As I sip my coffee by the windows, the sky gradually gets lighter. Some mornings, like this one, an incredible sunrise lights up the sky. 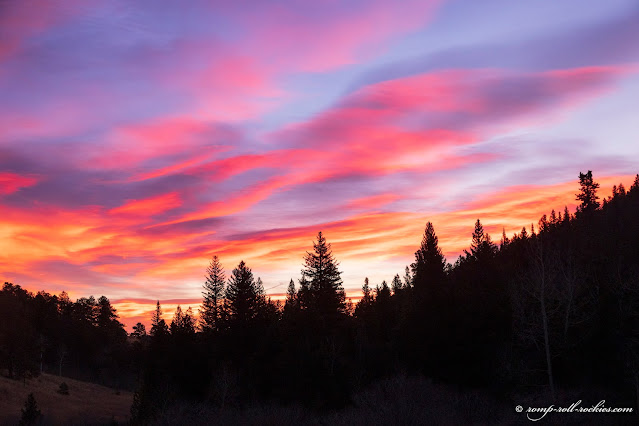 Lab Valley has lots of cool birds but a recent sighting was the best yet. During a hike, we saw a small bird, tinier than a robin, fly out of the grass and onto an aspen branch. At first, I thought that it was a song bird. Then, I saw his head swivel like an owl. I pulled out my camera with a long lens, and we discovered that he was a Saw-Whet Owl. It's hard to tell how tiny he is in this photo - but he's smaller than a soda can. 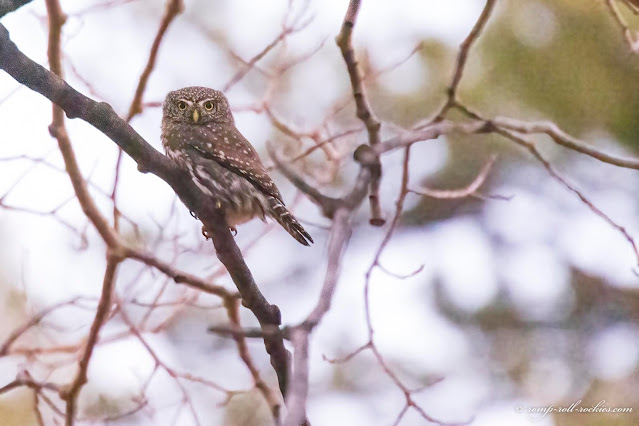 We are so grateful for this place that we call home. 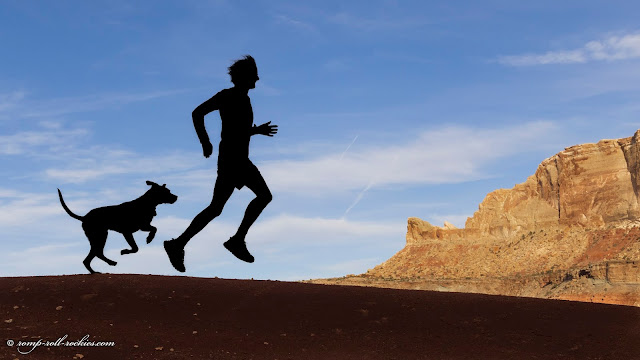 A mother mountain lion and her kitten check out a scent post (and the mother vocalizes!)

I love when my cams see multiple mountain lions at the same time. In this video, a mother mountain lion checks out an area with scrapes left by male lions. As she's checking it out, she gives a bird-like chirp to call her kitten (at about 1:07). The kitten is big - almost full grown but he comes when called. What a gift to get to see them!

The video is short. Please check it out if you have time.

Last week, Shyla had a vet appointment, and we decided to bring Hachi to do some training with him outside the vet hospital. The first plan was that the Runner would do that while Shyla and I were inside the hospital. However, it turned out that Hachi was horrified that Shyla and I disappeared into the hospital for 30 whole minutes. He was too worried about us to do any training. 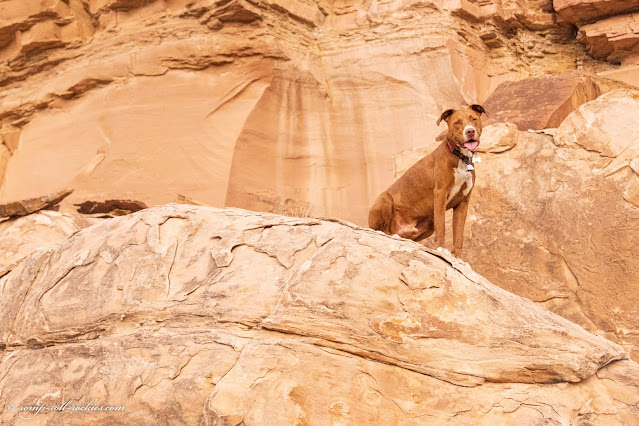 The next part of the plan was that the vet would prop open the door to the "reactive dog" exam room at the end of our appointment so that Hachi could try doing some training near the door. The reactive dog exam room has direct access from outdoors so that the dog doesn't need to go through the reception area.

As soon as Hachi saw us emerge from the hospital unscathed, he leaped up and down, and then he showered us in kisses. He was so relieved. 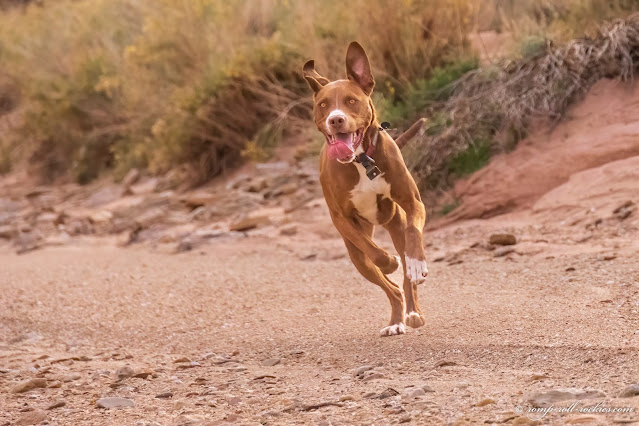 He seemed so happy and good after greeting Shyla and me that we went forward with approaching the exam room. Much to our surprise, he pushed through the only slightly open door, and he sniffed all around the empty room while the Runner gave him treats. It went better than we ever expected, especially since it was the exact room where he was very scared during an actual vet appointment back in the summer. 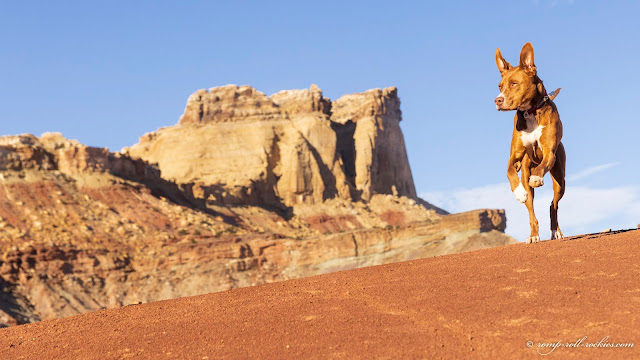 We are happy to have seen such a breakthrough. It will probably be a long time before he can handle the same scenario with a stranger waiting in the room. But we'll take our victories and celebrate.

We love our Hachi.

We are still waiting for our first real snow of the year. As I thought about the recent warmth and dry weather, I realized that we had a really big storm on this date a couple of years ago. Our Black Dog was starting to slow down but he and I went out to play in the snow. The snow drifts were as tall as him! 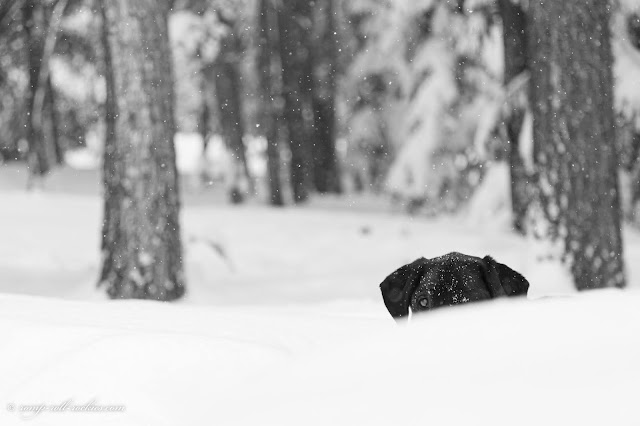 He was almost completely blind at that point but he romped through the snow joyfully. 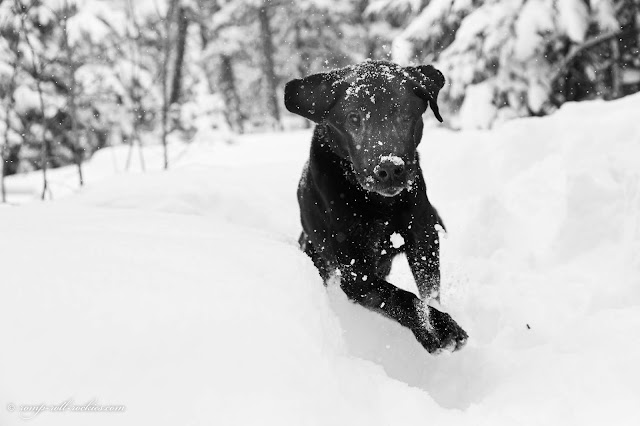 Shyla is a bright light in Hachi's world. From his youngest days, she gently lured him into play. Often, these lures were soft looks as the two of them ran side-by-side. She still does the same kind of looks toward him to this day. It's because Shyla loves playing with Hachi as much as he loves playing with her. 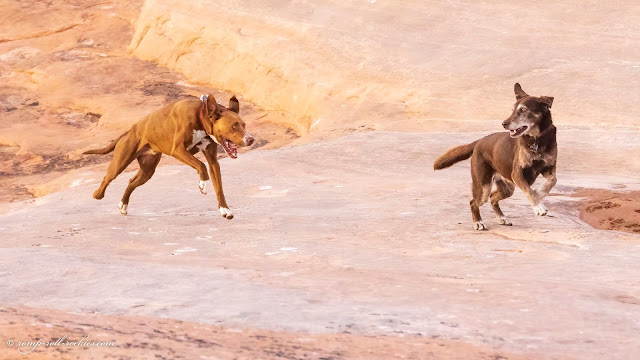 Shyla is central to our dog-human pack. She is everyone's best friend. 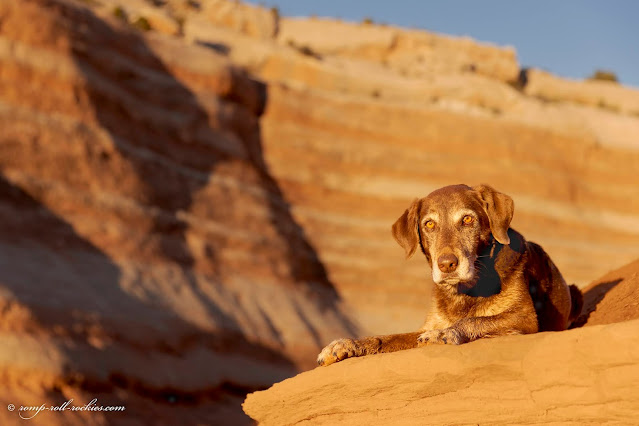 From her difficult start in this world, Shyla has blossomed to an extent that we never foresaw. We all love her.
Posted by KB at 2:00 AM 12 comments:

Wildlife travel a path deep in a gulch

Deep in a gulch, there's a forest path used by all sorts of wildlife. It is fun to see each species travel past the cam. A mama moose and her calf passed it more than once during the summer and fall, and it's amazing to see how fast the calf grew! Other starring species include bears, one of whom had a couple of cute cubs.

Check out the video if you have time.

I am thankful for every star in the sky and for the glorious desert landscape. 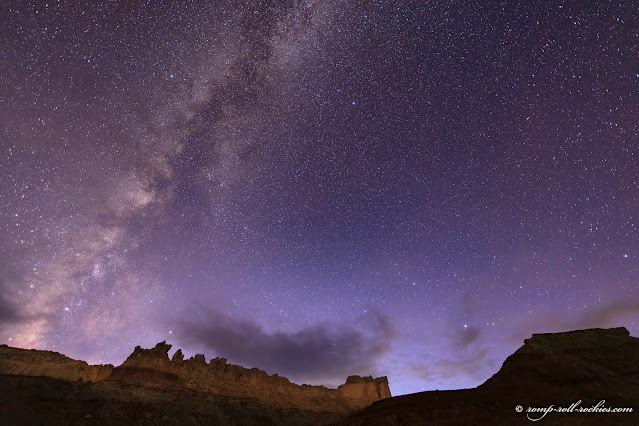 Happy Thanksgiving to all of you. It's a bittersweet one here with my dad's illness but we are making the best of it.

A pair of mountain lions out in daylight

You'll see a pair who seem very comfortable with each other. My first guess was a family unit. If you watch closely, you'll be able to see faded spots on the first lion who left the cam's view. That's a sign of a kitten. I think that the other lion was the mother.

Check out the video. I was overjoyed to get this footage!

Hachi seems more comfortable in his own skin than ever before. He gives us the feeling that he's open to learning things that we'd put on the back burner.

One of the first things that we'd love for him to learn is that strangers are not as scary as he thinks. That's an overwhelming task from the point of view of his humans. He thinks that all but about 6 people in the world are potential threats. That leaves billions of people for him to learn are not scary.

In my mind, I finally figured out a way to think about it. My mantra is now "one person at a time", meaning that we will work with him on getting to know a single new human at a time. We decided that a very experienced dog trainer should be that first person. She can teach us more about how to introduce him to strangers and how to respond when things go badly than we know now.

Our first session with her was at our place because that's where Hachi is most comfortable. We started out with "parallel walking" along our driveway. In this, we began with Hachi behind her on a leash with the Runner. They gradually caught up until the trainer, me, and the Runner/Hachi were walking side-by-side.

And that was all that we did in the first session. We liked the trainer a lot. She didn't push Hachi too hard. That is the most important thing in helping Hachi get over his fears. We've seen it again and again.

We'll keep on working with our Hachi. This is all part of the bigger picture leading toward him being able to go to the vet without being knocked out by sedatives. The vet is a stranger who he's afraid of. Perhaps our "one person at a time" approach will eventually help him to generalize enough that he can be near our vet without being terrified.

We love our Hachi.

Our Black Dog was so intense as a young dog. His breeder said that he had the least intensity of any pups in his litter. We frequently joked that it must have been quite a litter to have in your house.

His intensity manifested in a lot of ways. One of the most frequent was in barking when he was excited. He barked and leaped in the air at the start of almost every morning run that he and the Runner did. He barked before his meals. He barked before all training, including the exercises that he and I did together. One neighbor who lived more than a mile away said that she knew when R and I were just about to do his "crawl under the chairs" exercise because she could hear his joyful barks. She said it with a smile. 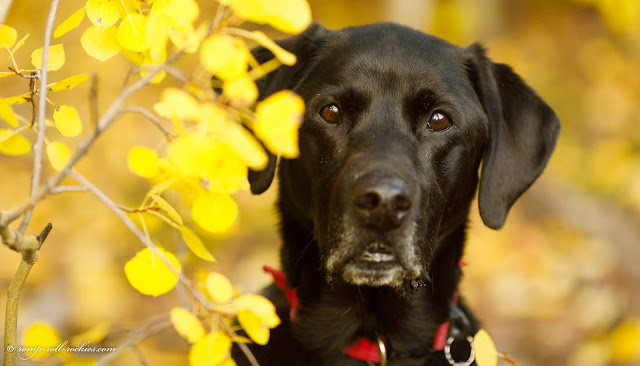 He also loved to vocalize when I was taking his photo. It may have been him who taught Shyla to howl for the camera. 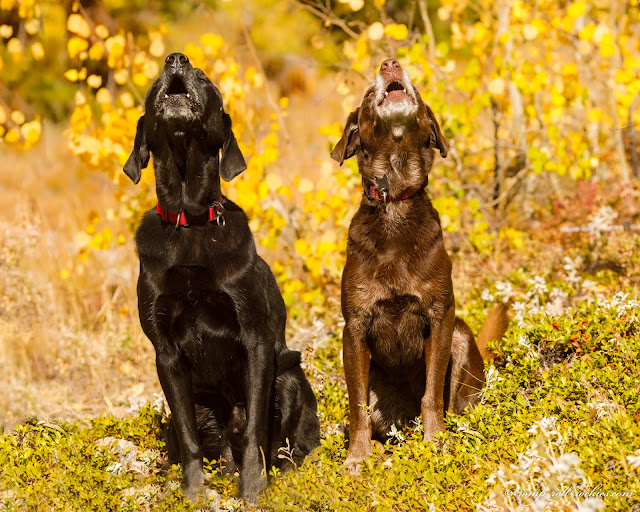 Try to live like our Black Dog - singing joyfully at every opportunity. Happy Black Dog Sunday!

My best friend... Her face is getting grayer but our bond is getting deeper. 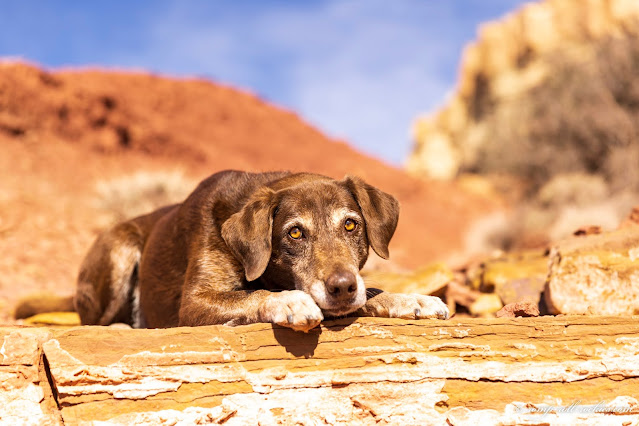 As Shyla has gotten older, we have become more in sync with each other. She can read my mind and I can read hers. Just like with all the dogs before her, the depth of our bond makes me want her to live forever. 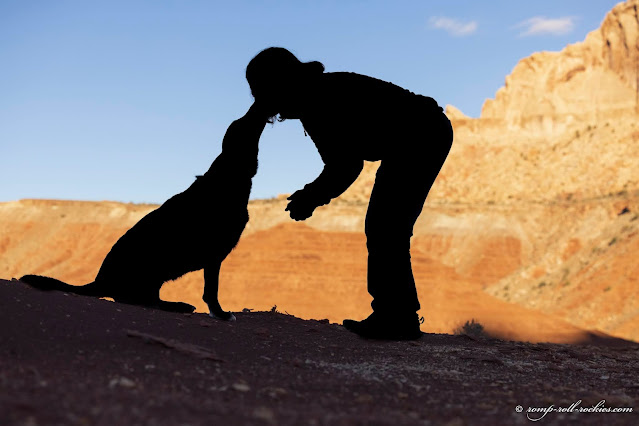 I love my Shyla.