The dance among the lion and scavengers at an elk carcass

I'm sure that some of you remember the story of the mountain lion who killed a cow elk on my friend's land that I talked about in two posts (Post 1 and Post 2). I set up trail cameras all around the carcass to capture footage of the lion and the scavengers who ate every last bit of the elk. 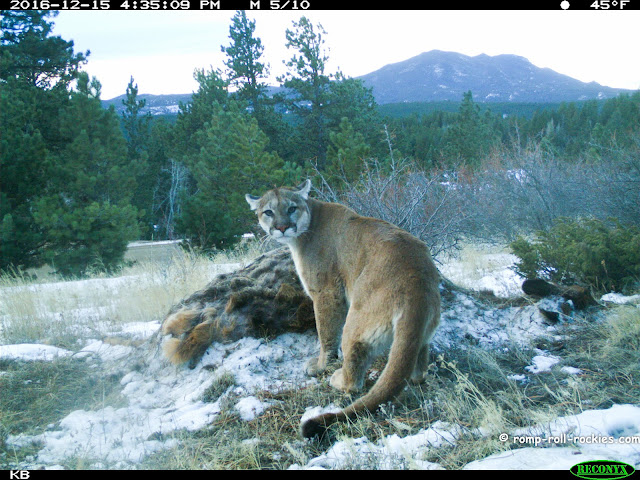 I haven't had a chance to tell you about the scavengers who moved in in the mid-day hours as well as after the lion abandoned the carcass on December 17. They included magpies, ravens, a golden eagle, and coyotes. The coyotes even howled occasionally!

I put footage of the scavengers together into a video that I thought that you might enjoy seeing. I think that a fascinating aspect of it is the interactions among the scavengers and the lion.

It was interesting to see how worried the coyotes were when they dared to go near the carcass during the phase when the lion was still nearby. The first coyote clip shows an example of that behavior. No doubt, the lion would kill a coyote he found the coyote eating his hard-earned elk meat.

I also enjoyed watching the magpies and ravens brazenly continue to eat while the coyote or golden eagle was on the carcass. Seeing a Golden Eagle was really a treat!

Then, in the last clip, I loved watching and hearing the coyote howling while at the carcass!

You can watch the short video here or at Youtube.