Our young male black bear was drinking from a spring when he noticed my trail camera. Unfortunately, unlike many bears, he didn't just sniff it. He killed it!

When I arrived at the site, I saw my cam broken into two pieces, a padlock pried open, and the front part of the camera on the ground. At first, I was furious, thinking that a bad human had done it. Then, I noticed that the memory card was still in the camera, and that made me think that maybe it wasn't a human who destroyed it.

Indeed, the memory card showed that "Bandit", the young male bear who I introduced you to yesterday had attacked the camera. I felt so much better that a bear had destroyed the camera rather than a human. After all, I put my trail cams right in the midst of where bears live out their lives - so this type of thing is expected. Young ones like Bandit get curious, and they use their strength to fully investigate a camera. It was my mistake not to have the camera in a bear case.
The trusty camera kept recording video until the "end".  The two parts in the photo below were attached to each other before the cam was attacked... I wish that I'd thought to take a photo of the camera at the scene but I was a little too rattled to remember to do that. 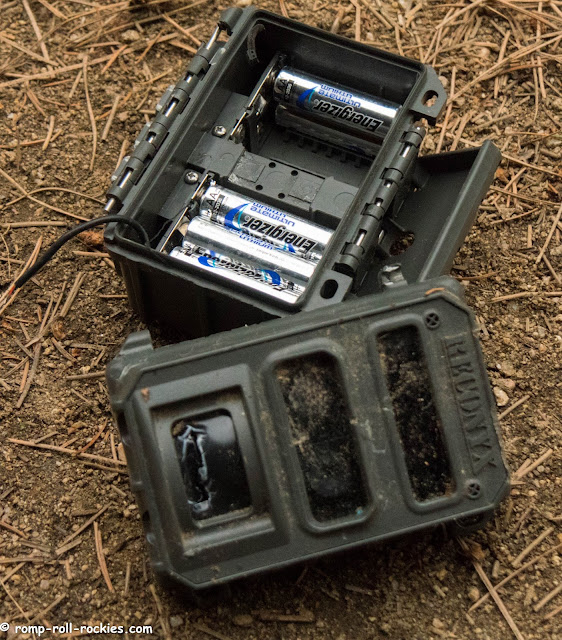 Here's the video of Bandit killing the camera (from the camera's point of view) plus a video of him attempting the same thing with another camera on a snowy day a couple of weeks later. I think that bear security cases are becoming essential due to this youngster!

It's rather shocking and scary to see Bandit's teeth attacking the camera from the point of view of the camera. I am generally not worried about bears when I'm in the forest because they are so timid. This video gave me some idea of the power they possess. We are lucky that they are normally timid!
Posted by KB at 4:00 AM