I know a clearing in the woods that mountain lions visit frequently. It's on a saddle of a ridge so it's a natural spot for them to cross the ridge. A huge old Ponderosa Pine tree spreads its limbs on that saddle, and mountain lions like to mark their territory by scraping (with their hind paws) in the pine needles under it.

I know all of this because I have had trail cameras in that spot for years. Last year, I started getting worried because my rate of mountain lion sightings had gone way down. I'd gotten no mountain lion photos at that site in about a year. I worried that the lion population had plummeted for some reason.

This was a photo of a mountain lion in that clearing. 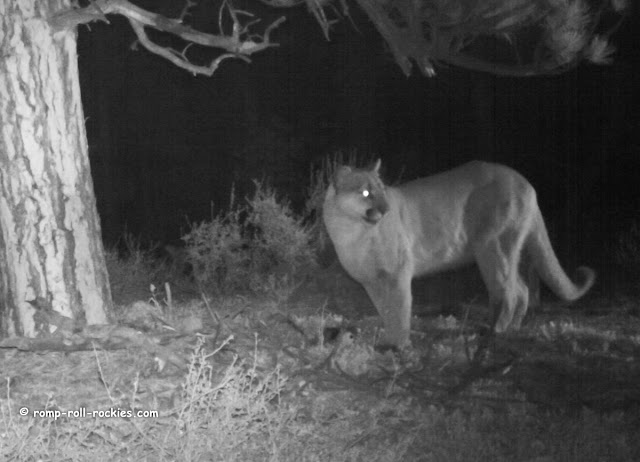 Then, one day as I rode my mountain bike through the woods, a cylindrical object on the forest floor caught my eye. I stopped, thinking that it was trash that I should pick up. After I examined it, I saw that it was an electronic device made by a wildlife company. I also saw tooth marks in the neoprene sleeve covering it.

I brought it home and Googled it. To my surprise, it was a light-sensitive device that made animal calling noises when it was dark outside. My reading told me that it was frequently used by photographers to entice wildlife to visit their cameras.

I thought, "What the heck? I've scarcely gotten any mountain lion photos in the past year. It's worth trying it to see what happens.". I put it on that ridge saddle, under the Ponderosa Pine. At first, not much happened except that the darn thing burned through batteries at a surprising rate.

Then, I found a series of videos on one of the trail cams on that saddle. It was a mountain lion who was intrigued by the device.

I thought that it was cool to get to see so much behavior by the mountain lion as he checked out the device and eventually took it away! The funny part, to me, is that theft by a mountain lion is probably why the device was lying on the forest floor to start with (remember that I said it had teeth marks on it?). Now, the device is floating around in the forest again...