Yesterday was devoted mostly to trying to keep our black dog calm and not-too-unhappy. I can't blame him for feeling upset. He just went through this same thing so very recently. What he doesn't know is that this episode should be much shorter - assuming that the pathology reports are not bad.

In the meantime, I spent some time sorting through the 200 GB of footage that I have so far of animals eating the elk carcass. For today, I'll share mountain lion footage. No other mammals, like coyotes, dared to go near the carcass while the mountain lion was still interested in it. 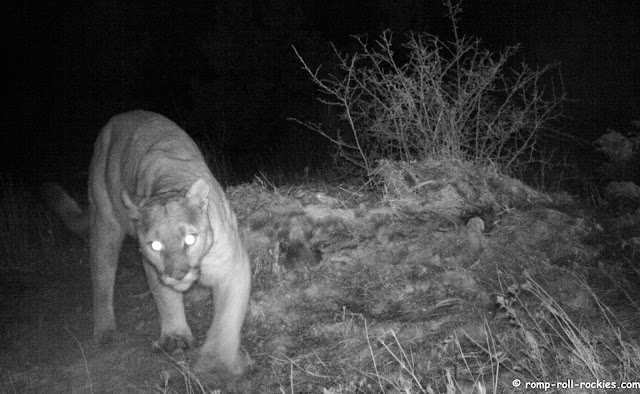 In the video, you'll first see one of our favorite dog friends check out the carcass and try to eat a little of it before sprinting back to his human. Then, you'll see the mountain lion arrive for his second night of eating. The contrast between the Lab's size and the mountain lion's size is stunning to me.

The mountain lion was always very wary while at the carcass. He'd stop eating to scan his surroundings regularly. I'm not sure if he'd be so wary if he weren't close to humans. He did one bout of eating from nightfall until 7PM. Then he returned at 4AM and ate for an hour. I wonder if his umbilical hernia limits how much he can eat in one bout because it must hurt if his intestines get full.

His strength awes me. When he first arrived both times, it looked as if he tried to move the elk but couldn't pull it uphill. If it were a smaller prey item or if a secluded spot were downhill, I'm sure that the lion would have opted to move the carcass to a safer spot.

Finally, when he departed at 5AM, he covered the carcass with snow, using his mammoth paws to throw snow backward onto the carcass.

Enjoy the peek into a mountain lion's life in the video.