Thankful Thursday: The Awakening of Milton the Black Bear

Upon returning from the desert, we immediately knew that the bears were getting active. As we headed down our driveway, we saw that a bear had knocked over both of our bear-proof garbage cans, and he'd rolled one into the forest near our house. We knew that the males were waking up before we left but it always takes a while before they start actively seeking food.

This year, bear activity is starting about 5 weeks earlier than last year, probably due to our mild spring.

The day after we arrived home, I headed for an area thick with black bears most years. I expected that I might find a trail camera video of male black bears. However, as you might remember, female bears who are raising cubs can't leave their dens for another month or so. The cubs aren't ready to walk any distance yet so I didn't expect to have footage of any sows. Last year, my cams at the den showed that the newborn cubs didn't set paw outside the den until mid-April.

My hopes were realized - and with my favorite male bear. Milton, the huge male with a white patch on his chest, had lazily hung around a spot where I have multiple trail cams, letting us get a glimpse into the life of a bear whose behavior isn't being affected by fear of humans nearby. 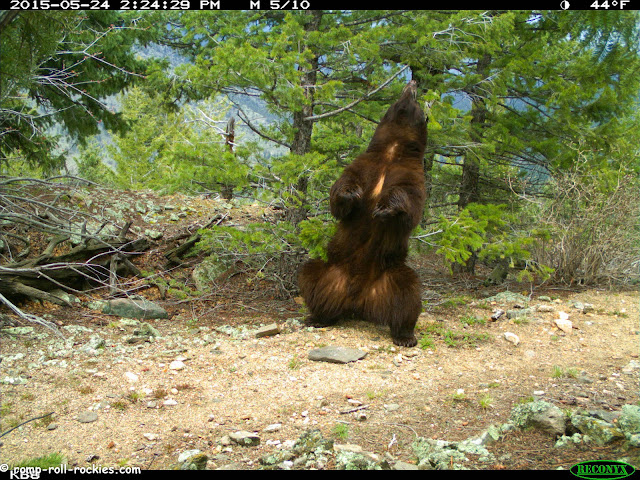 In the video from this April, Milton first danced at a popular bear-marking tree. Then, he stood, listening to the world while urinating in front of the cam. Next, he stood in a spring-fed puddle and appeared to listen to the birds and squirrels. Finally, he marked the nearby tree again, before heading off to visit other key spots in the forest.


You might remember that Milton was very badly injured a few years ago. He was not bearing weight on one front paw, and he disappeared for months at the end of the summer. I feared that he'd died. However, he returned and appears to be getting stronger and stronger over the years. I'm so thankful to see him so fat and healthy, after four months in a den!