One Year Ago - Bear Cubs were Born!!!

You might remember that I discovered a bear den years ago. It was occupied in the winter of 2009-2010 by a sow with her yearling cubs. Then, I kept a trail camera pointed at it for SIX years before the den was used again. Last winter (2015-2016), it was occupied again. .

My trail cams in the area saw the last sow walk a nearby bear trail at the end of October, 2015. Her movements suggested that she was heading toward the den. I waited until December 10, 2016 to check the den for an occupant. I completely expected it to be empty so I walked straight to the entrance and peered into the murky cave. A pair of eyes was looking straight back at me. I think that I jumped a foot or two into the air!

I quickly retreated and gathered trail cameras that could record photos and video. I revisited the den to set them up. Then, I waited and waited and waited before going back again. I didn't want to do anything to upset the bear.

At the end of February, I returned to the den to check the cams. No sounds emanated from the den so I didn't know until I got home and put the memory cards into my computer that the mother bear had given birth to two cubs on 1/31/16!

Here was the time line of the mother bear's actions.

All through the winter until 1/14/16, the bear ate snow only twice, both times by reaching her head outside the den to take a bite or two of the snow on the ground. 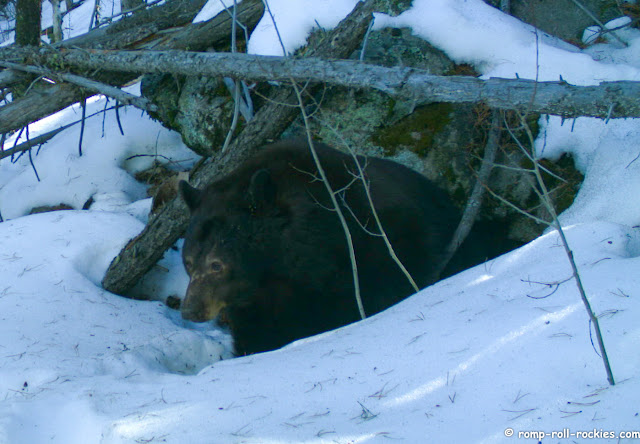 On 1/14, things changed. She began eating snow at least once per day. She wiggled so that her head reached further outside the den, day by day.

Then, on 1/30, she was a restless bear. Her head was visible in the den entrance almost all day. 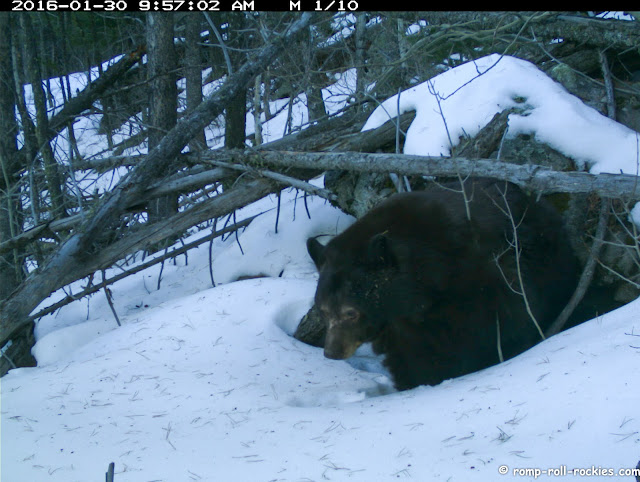 She ate snow many times. Twice, she walked outside the den. Each walk was only about 6-8 ft in distance but it was an odd departure from her behavior earlier in the winter. 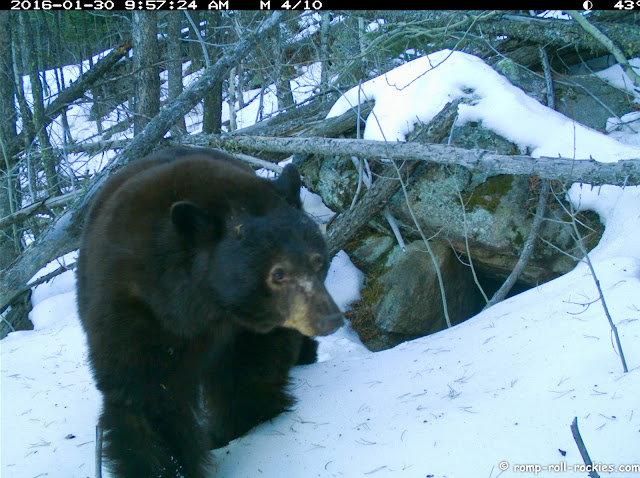 On the night of 1/30, she seemed not to sleep. She looked outside the den, and she seemed to toss and turn until our last video clip at around 11 PM. After that, she was deep in the den, and there were no visible movements to trigger the cams.

The next morning dawned with incredibly strong winds. The tree holding the cams swayed in the wind, which triggered a cam to record video and audio. The audio told the story - cubs had been born, probably very early in the morning of 1/31/2016!!!!!

You can watch the video here or at Youtube. Make sure that your sound is turned ON!!! The bawling of the cubs tells you the most exciting part of the story!


I know from the accounts of others that the cubs were tiny when they were born. They would have fit into a human hand. The scientific literature says that they weighed about 1 pound when they were born. They spend almost all their time over the first months of their lives latched onto nipples, nursing. They bawl like you heard in the video when they lose their grip on the nipple or are not covered by mom so they get cold.

I plan to follow along with this story from last year. Last year, I severely limited my visits to the den and my cams to avoid upsetting the bear family. Each time I visited, I got more than 100 GB of videos and photos, and I was unable to keep up with watching all of the footage and posting it in a timely way. I plan to post new footage this year, using the "extra" footage that I didn't post last year.