Nearing the end of a bear family's time in their den

You all may remember that last winter (2015-16), I had trail cameras pointed at a bear den. A sow chose the den as hers for the winter. She gave birth to two cubs, a black male and a brown female, in late January.

There was little activity, aside from a red fox going halfway into the den, until April. After the cubs starting going outside the den, my cameras recorded thousands of videos and photos. I wrote posts covering the time until about the end of April, when the cubs were becoming very active. I have a list of all the posts at the end of this one.

When I'd gone through all of the footage through the end of April, I ran out of steam.

Just yesterday, I realized that we were at the anniversary of the date that the bear family departed the den last year. I wanted to finish sharing the footage that I collected before they departed.

At the end of April, a few things happened with my trail cams at the den. Two had dead batteries, and the cubs had rearranged the others, changing which way they were pointing so that the angles were ridiculous.

I knew that those things might happen but I didn't want to disturb the family in the spring to check my trail cams. The possibility of accidentally scaring them when they were playing outside the den horrified me so I stayed away from March until June.

It turns out that those cams pointed at crazy angles by the cubs were recording some fun photos and videos!

On May 2, the pair of cubs played vigorously in front of one cam which captured some great photos of each of them. You can see the clear difference in color between them in this photo. 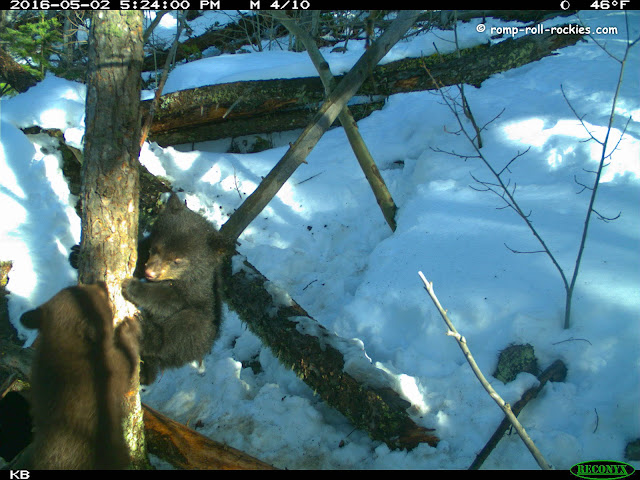 After the photo of the pair was taken, the black cub stayed at the tree, climbing and chewing on the bark. 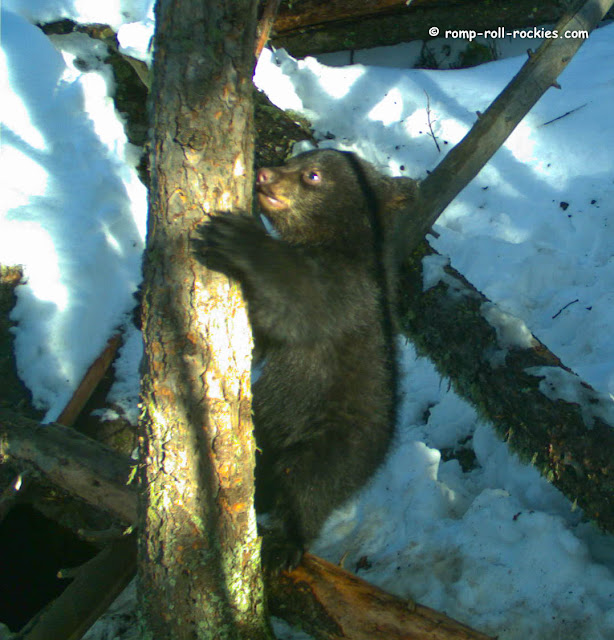 I love seeing his cute little face so clearly. 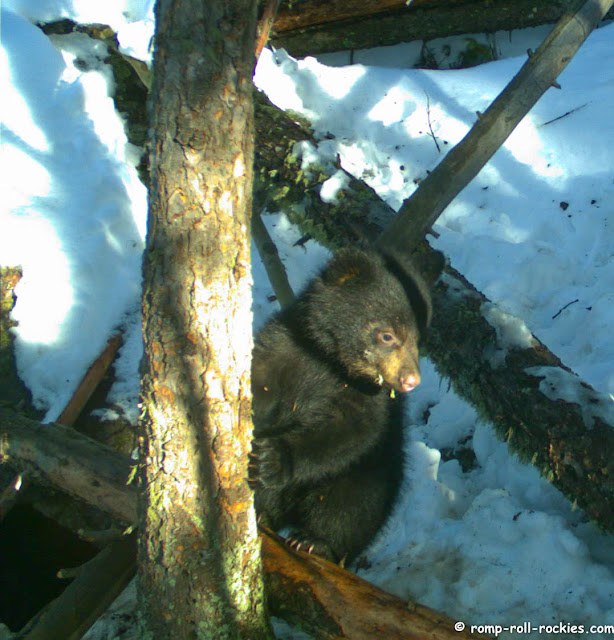 He already had big claws, essential for climbing. 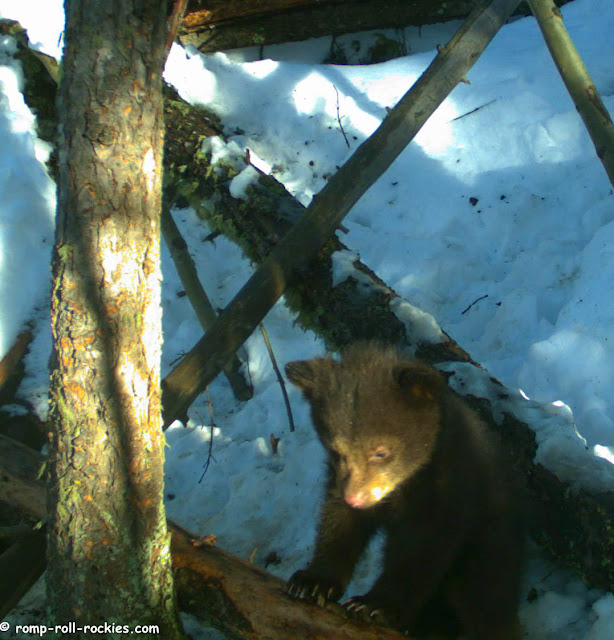 Then Brownie came over to take his spot on the tree. 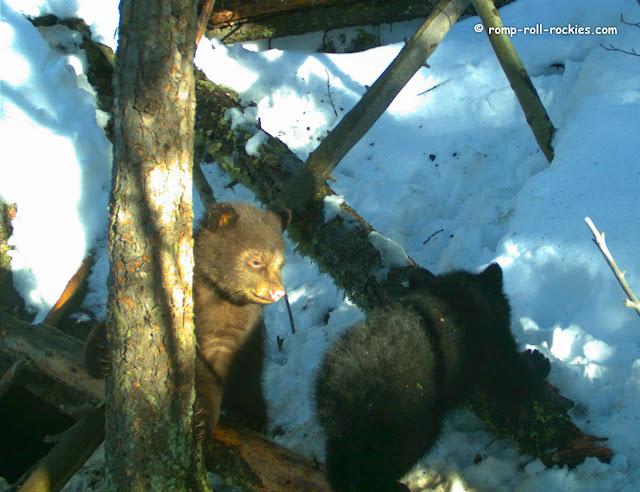 She, too, wanted to chew on the bark. 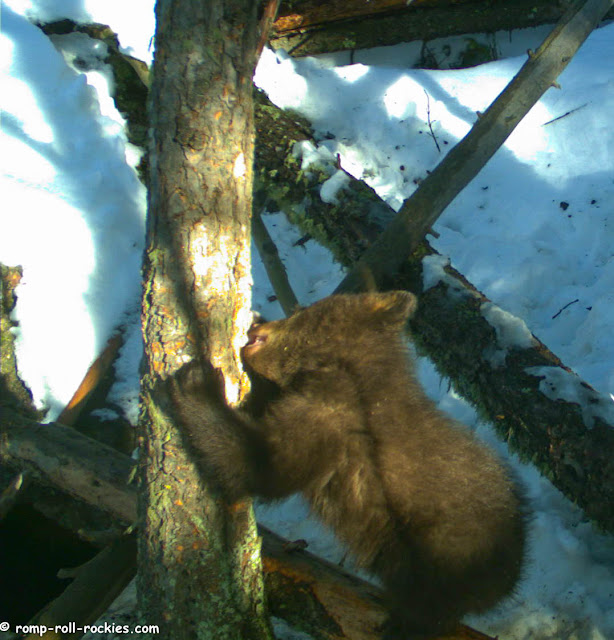 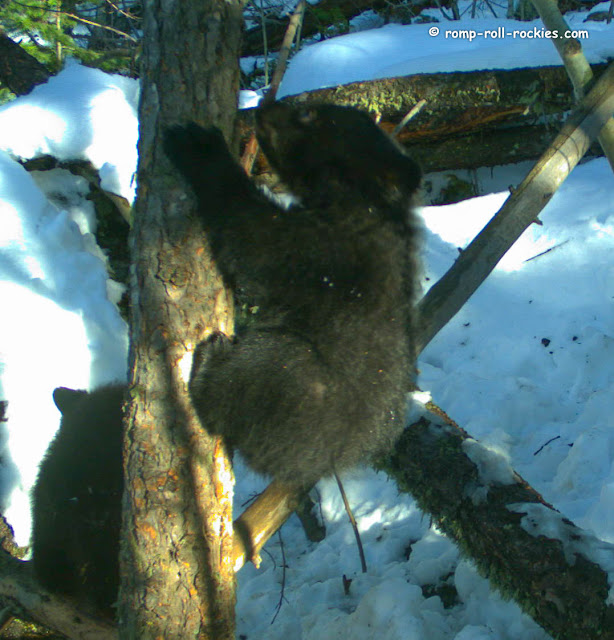 At this age, their noses are so pink that they look almost like pig's noses. 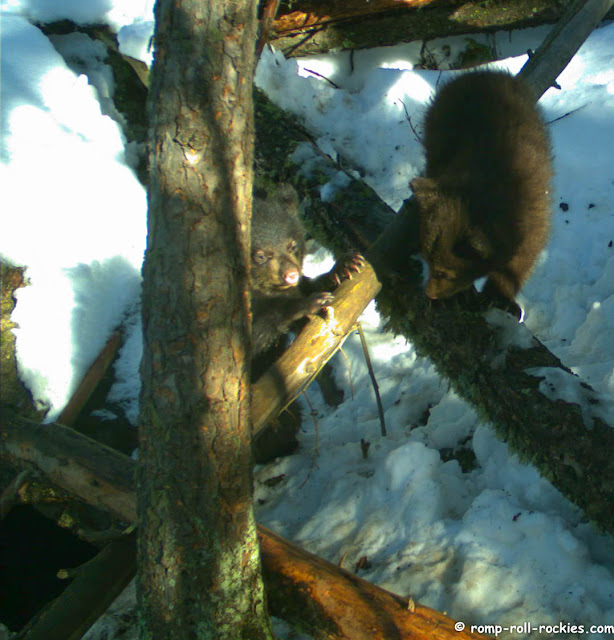 The forest near their den was like a giant jungle gym. 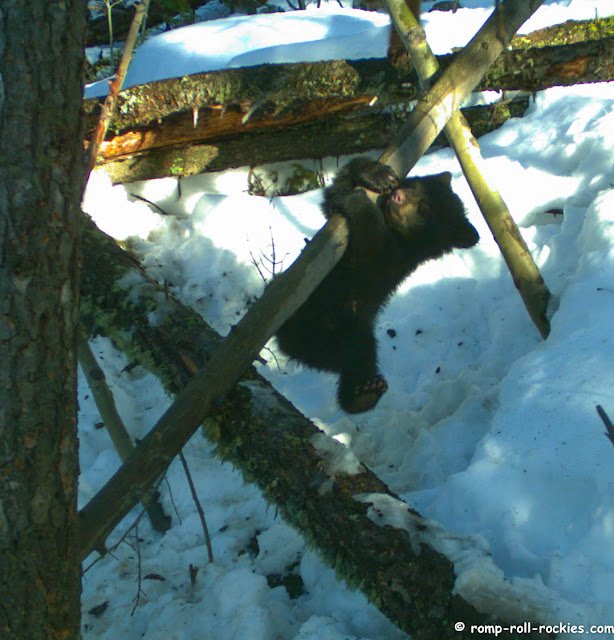 To give you a sense of how tiny the cubs still were, here is their mom arriving to check on them. Note a cub to her left. 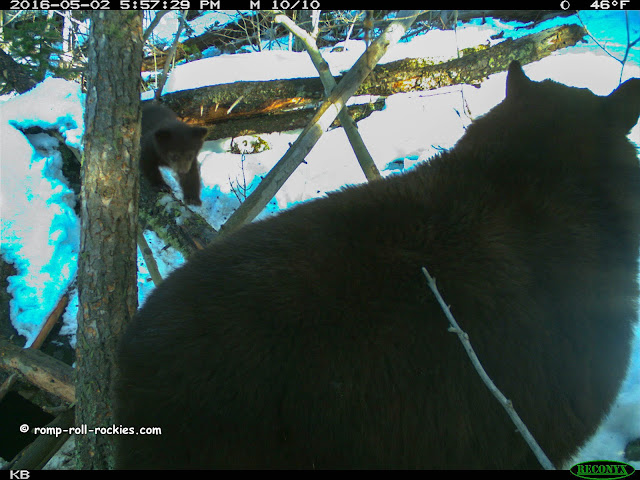 She led them back to the den. Do you see the two obedient little cubs on her heels? That's how they moved through the forest for most of last summer. 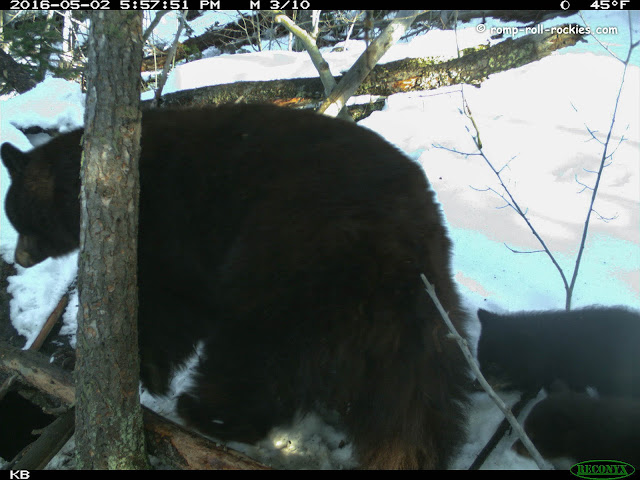 On the date of those photos, the cubs and their mom were still 19 days from leaving the den. The single most critical skill for them after leaving the den is being able to climb trees. They flee predators by going straight up trees very high and very fast. Often, their mom will stay at the base of the tree, charging anyone approaching it, to protect the cubs.

On the day of all those photos, the two cubs spent a lot of time climbing the trees in front of their den. Somehow, one of the cams that they'd rearranged captured it beautifully.

I made a video of their climbing. At the end, you also hear and see a common sequence. When the cubs wanted to nurse, they went into the den. If mom wasn't there, they started bawling to call her. That happened at the end of the sequence - be sure to listen for the bawling at the very start of the clip. They seemed to take several one hour breaks for nursing and rest during the day.


For those of you who would like to go back and see the previous bear den posts and sightings of the family after they left the den, here are the links.

Last summer after the family left the den
First appearance of the family since leaving the den
Bear family near my house
One cub separated from family and was very distressed (he found them - don't worry!)
The whole family appears at watering hole

I'll be posting a few more videos about their time at the den. I'm also hoping that we get to see the mother bear and cubs before the family breaks up this spring. At the start of mating season, the mother will chase away her cubs. It's a tough phase for the cubs, on their own for the first time. In the long run, the black male will need to leave the area to find his own territory. In contrast, the brown female will take a territory close to her mother's territory and will begin raising her own cubs in a few years.