The Trials of Deep May Snow for Us and the Wildlife

Our snow barely melted today, and it became even closer to concrete in consistency. It took a Herculean effort to snowshoe through it or to gallop, as you can see from Shyla's look early in our hike this morning. 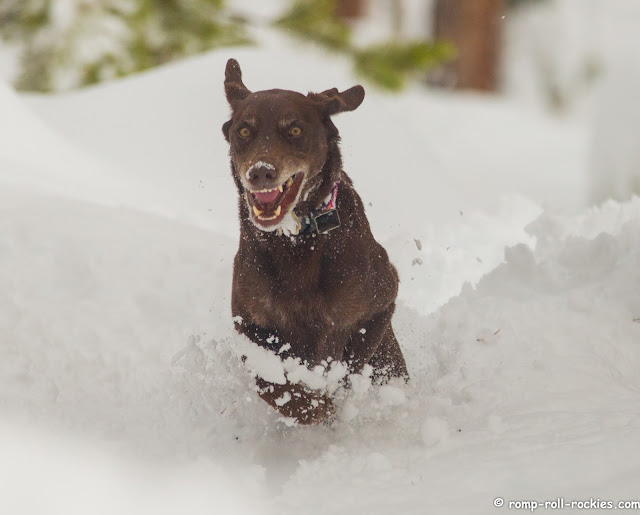 Her energy was lagging quite early in the hike. I'm not surprised - it was so hard to move through this snow. Early in our hike, her technique was to rise up above the snow like in the photo below. 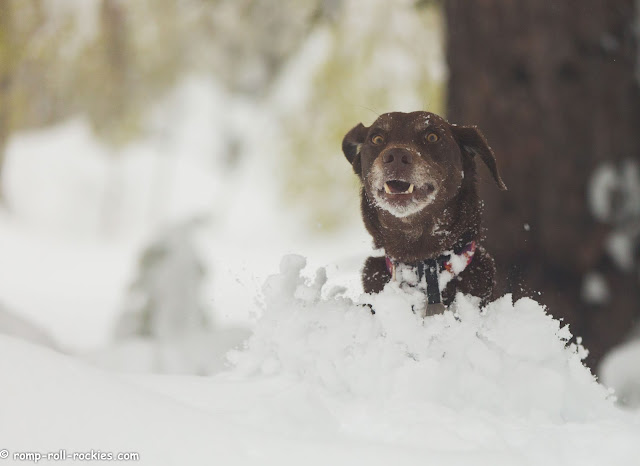 Then, she'd launch herself forward, trying to stay above the snow. 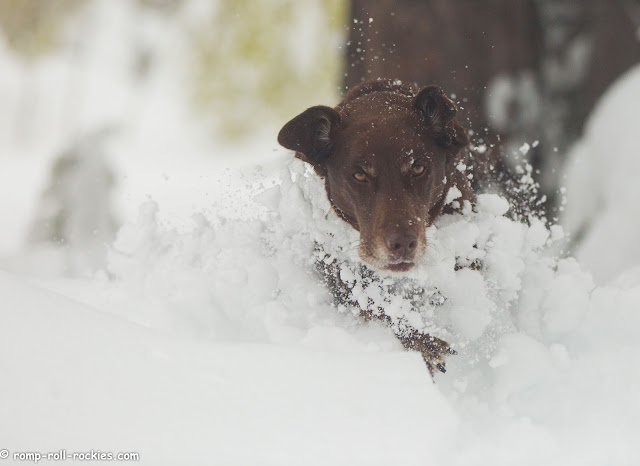 And that was just one stride. She had to do it again and again, and she began to look less enthusiastic. 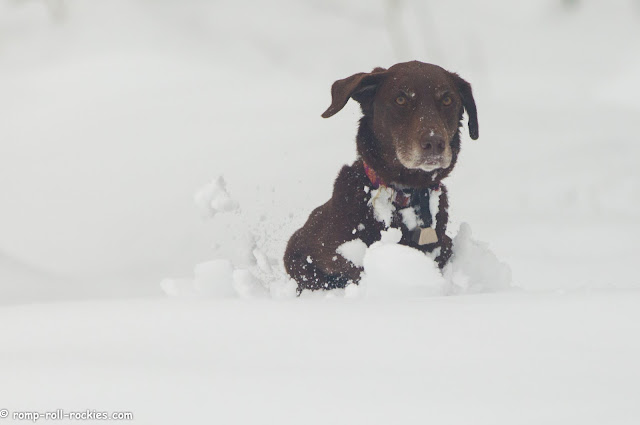 The launching was the hard part. 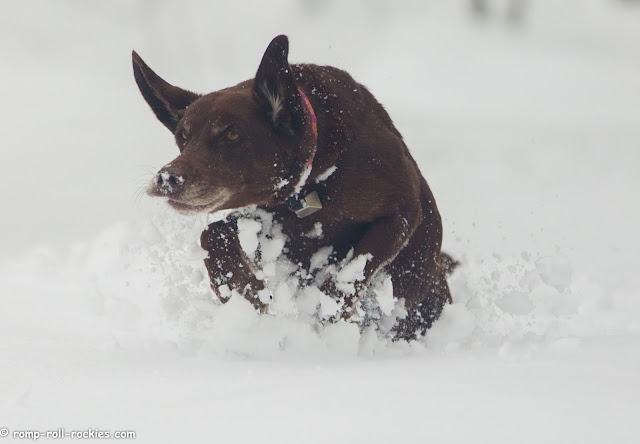 After seeing how very hard she was working, I suggested that she try walking behind me. She could go at my snail's pace for short periods and then she'd launch herself into the snow again. She amazes me!

As I watched her and felt how hard it was for me to walk even in snowshoes, I thought about the wild animals. I remembered our 7 foot blizzard more than a decade ago, and the way I'd seen single file elk tracks through the meadows after that storm. I imagined a rotating echelon of elk, like a group of bike racers.

After I hiked with Shyla, I found some dirt roads in decent shape for some outdoor biking. I felt lucky to get to see elk moving through the concrete snow - single file, as I had guessed. 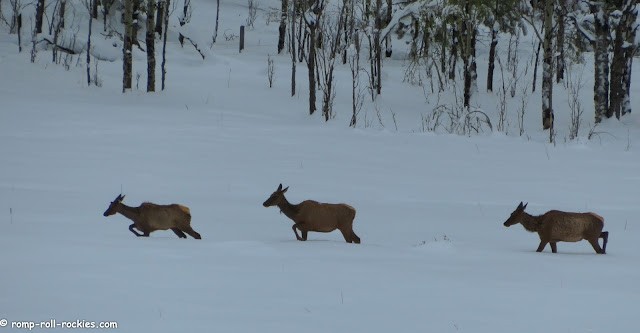 The smaller ones were having substantially more trouble. They were probably the calves born last summer. You can see the two calves in the very back of this foursome.

This was my favorite of the photos because it shows how hard the elk were working to move through the snow. 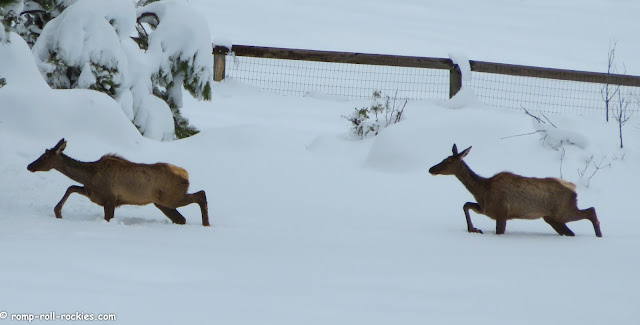 I feel for the animals who have already given birth to their young. One example is black bears. At this time last year, the sow and cubs in the den where I had trail cameras were in their last days at their den. Look how tiny the cubs still were! 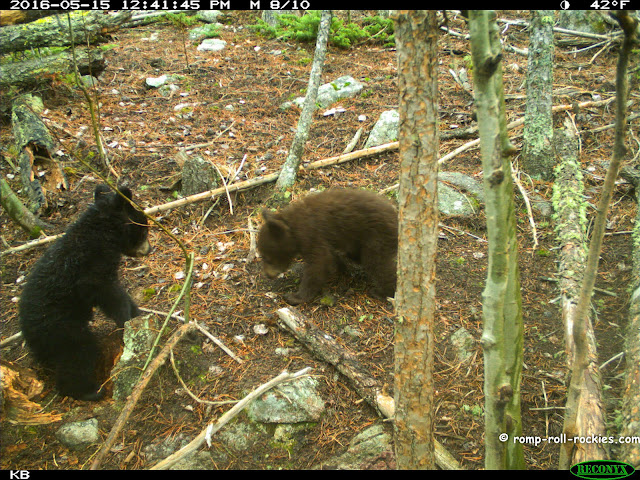 Here was Mom (from the same camera), for size comparison. Her face is scarred by mange, a common occurrence during the winter for bears. 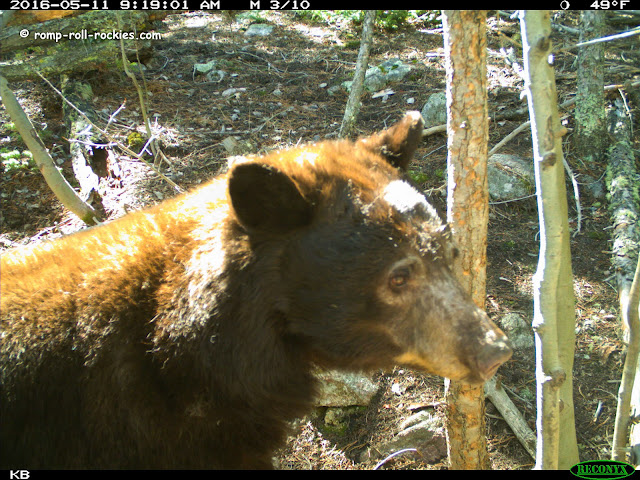 With how small the cubs were, they would have had a horrific time trying to move around in this snow. I suspect that, this year, mother bears are either still in their dens or have holed up under a pine tree keeping their cubs snuggled against their chests nursing.

Life in the mountains isn't easy but somehow our wildlife flourish despite the hardships.
Posted by KB at 4:00 AM