You might remember, back at the beginning of April, that I wrote about teaching Shyla to mimic my movements. Well, we've done it! 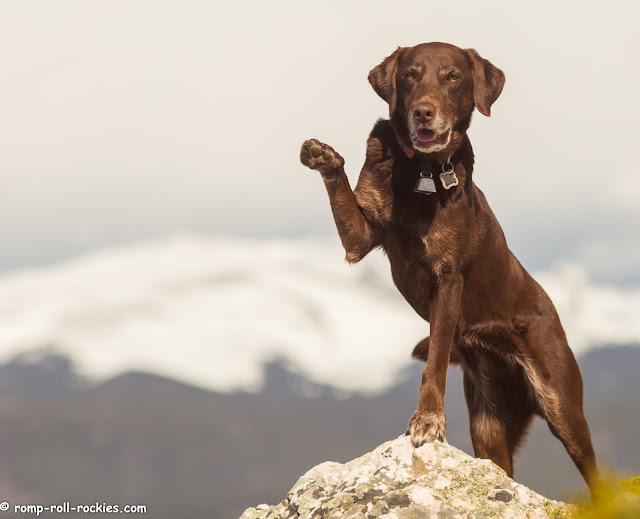 We used a combination of a Fenzi course that we took as "observers" (also known as "Bronze level students" who can watch but not participate) and a great book called "Do as I do" by Claudia Fugazza.

I started by using behaviors that Shyla already knew, like "spin" and "reverse" (walk backward). I'd have her do a sit-stay. Then I'd do the behavior myself. Obviously, it can't look exactly the same for me on two legs as for Shyla on four legs. However, that didn't seem to be a big problem.

Then, I started trying it for other behaviors that she had done in the past. I'd act out the behavior, and then I'd say "mimic" without ever saying the cue that she knew already. This was a test of whether she was ready to generalize the word "mimic". She was ready.

Then, the big test - could she do it for behaviors that were novel to her? If you watch the video, you'll see a couple of novel behaviors - crawling backward and climbing onto a rehab donut with all four paws.

The funniest part may be watching me do these dog behaviors! We were camping for part of the time that I was teaching her this. I kept imagining that a stranger would think that I was a lunatic if they saw me on the ground doing "downs" and "backward crawls" as demonstrations for Shyla!

Here's the short video - please don't laugh at me too hard or I'll be embarrassed!

You may be thinking, "Well, that looks like fun but what is it useful for?". One answer is that fun is a great end unto itself! Another answer is that it gives me a new way to teach Shyla tricks. If it's a trick that I can demonstrate for her, I just say "mimic" after I do it. Then, I can gradually give the trick it's own unique cue.