Over the years, I've learned that water sources attract bears especially when we are having hot and dry weather. I regularly explore the land around us in hope of finding new water holes.

About two years ago, I found a hidden water hole in a gully. It solved a puzzling mystery of why so many bears climbed into that gully every summer. It also explained why my cams saw so many bears looking partially soaked near that gully. 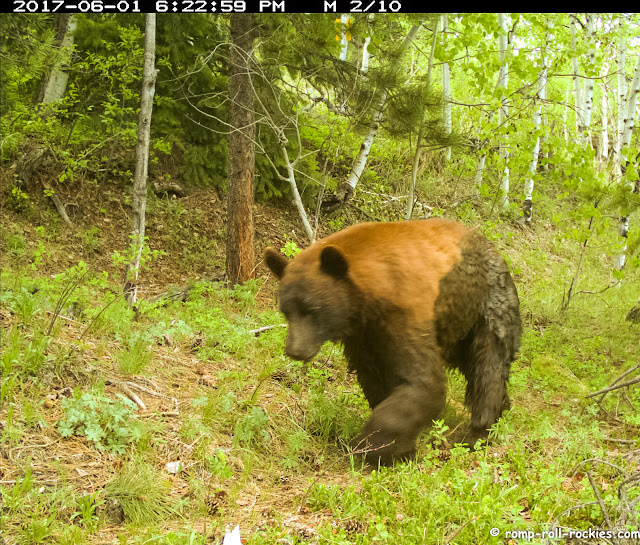 During this mating season, we saw a youngish male bear lose the "battle" for a sow to Tiny, our biggest male bear who must weigh close to 300 lbs. The "battle" consisted of Tiny marking a tree and stomping toward the young male while clacking his teeth. The young bear knew not to try to fight Tiny and disappeared into the forest. Young male bears must live "under the radar" of the big male bears so that they live long enough to become the kings of forest. This one seems smart enough to live for a long time.

That kerfuffle between Tiny and the younger male happened very close to the water hole in the gully. It turned out that the young male didn't go very far away after Tiny threatened him. The next day, the young bear took a long soak in the water hole.

When you watch the video, notice that he rarely let down his guard. He startled once and sprinted about 10 yards uphill before realizing that everything was fine. Then, during his bath, he sniffed the air many times, checking for the scents of other bears or other animals (e.g., humans) who might hurt him. Black bears tend to be very timid and cautious, contrary to the way the media likes to portray them.

For me, this is the fun of trail cameras. We have the opportunity to see how bears behave when they are going about their daily lives without humans present and influencing their behavior. Seeing and hearing this young bear take a bath made me smile ear-to-ear.

I hope that you enjoy it like I did. You can watch the video here or at Youtube.

In a future wildlife video, I'll show you how I solved another mystery. The water hole in this video went dry in early July this year but the bears kept marching through it and further up the gully. I bet that you know why! Another water hole sat well above this one, and I discovered it in early July of this year. That higher water hole seems to stay full until at least late summer. Our local mother bear and her cub visited it recently!
Posted by KB at 4:00 AM