My trail cameras picked up lots and lots of footage of bears throughout June until early July. Both big male bears and mother-cub pairs were marching along the Black Bear Trail. I think that this photo is the male bear, Bandit, who demolished one of my trail cams earlier this year. 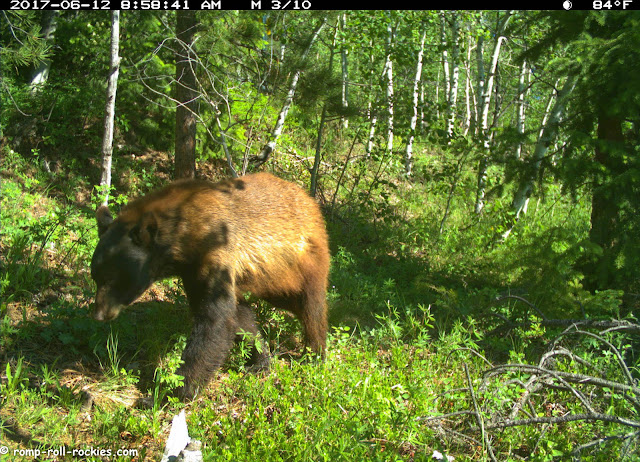 One of our biggest male bears, Milton, was on a mission, marching east to west over many hours. He marked every single bear marking tree that he passed. Then, he departed the area where I have cams. I'm quite worried about him because he was heading in the general direction of a place where a very large male bear was killed a day later. I doubt that it was him but I will worry until he shows up on my cams again. He's been around since I started using trail cams almost a decade ago.

I plan to make a video of Milton's journey and tree marking but, for now, I wanted to share a photo of him vociferously marking a poor stunted bear tree. 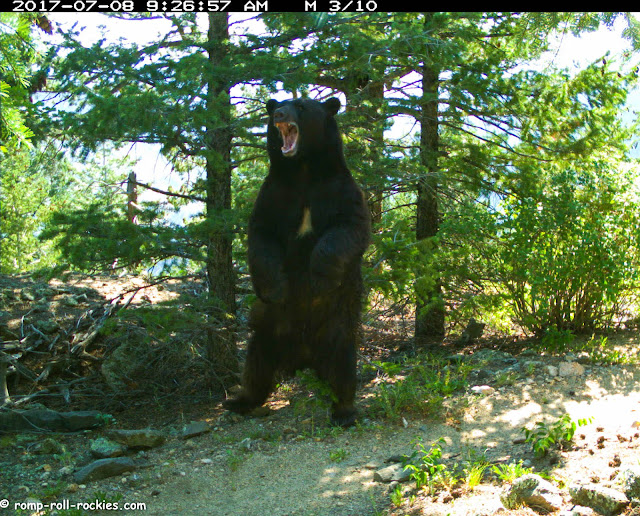 I truly hope that we see Milton again. A lot of bears are getting in trouble in Colorado because our late May snowstorm that followed very warm weather killed a lot of their natural foods. They are turning to human food sources.... so I'll be worrying about all of them.

On a lighter note, our mother bear who has a cub this year has been visiting water holes. I'm not surprised because it's been hot and dry. The two of them want to drink and cool off!

I made a video of their escapades, including some of the most extensive bathing I've ever seen by a bear. The mother bear carefully cleaned her face, behind her ears, and even a paw! The odd thing is that her bath water was the stinkiest of any around here. I don't have a clue why she'd prefer to bathe in that water hole rather than a clean one. I almost gag if I even splash some of the stinky water on my leg while checking my cam!

Here's the video. You can also watch it at Youtube.


Please let all our bears stay safe. For locals, please bring in food sources, and learn from your mistake if a bear does find food at your home. Please don't blame the bear and sentence him or her to death by reporting the bear. Instead, tighten up your defenses so that it doesn't happen again.

Let's take the responsibility on ourselves to keep our bears alive through this very lean period. They are amazing creatures!
Posted by KB at 4:00 AM