Today is a big day for R. The results will give us some insight into what the future holds for him. As a distraction from that, I have one of the most fascinating footage of a mountain lion, in full stalking mode, that I've ever captured.

Just after our last snow, I found mountain lion tracks all around our area. They went through wild areas with no homes and also went close to houses that have domesticated animals (goats, chickens, dogs).

I had lots of fun following them around (going around private property and then picking them up on the other side) but I really wanted to find photos or video footage of this animal at one of my trail cams.

I discovered that I did have mountain lion footage on my cams! The majority occurred before the snow, like this guy passing a cam. 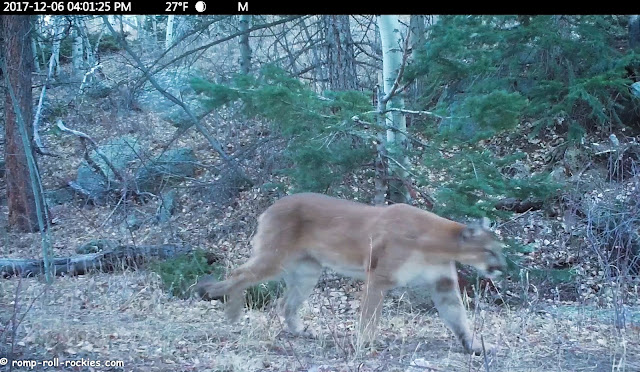 The other footage was some of the coolest action I've seen from a mountain lion in front of my trail cams. A mountain lion stalked an animal who must have been outside the view of the trail cam for about a half hour!


This was his arrival in front of my trail camera. It's a spot where there's a pool of water for most of the summer. When it dries up like now, the animal activity usually becomes almost nonexistent. Not this night! He took each step incredibly deliberately, avoiding making any noise at all. 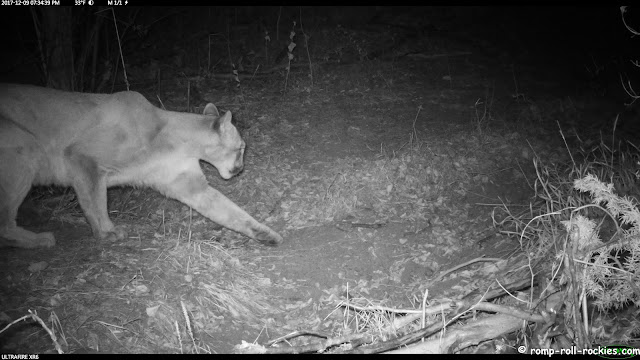 It took him almost a minute to get from that first position almost into his pouncing position. As he moved each hind paw forward, he'd inch this front paw forward so that the hind could land where the front paw just was. It appeared to be a method to prevent him from accidentally making noise with his hind paws. 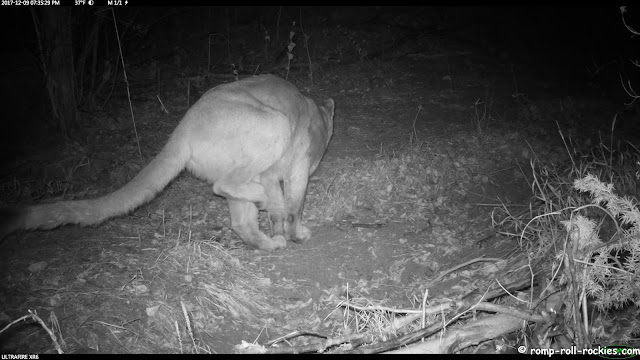 Then, he maintained this very uncomfortable-looking position for quite a while. I believe that he was ready to pounce on unsuspecting prey. Either there was a prey animal nearby or he expected that one might come looking for water. He held his tail up and off the ground the entire time. 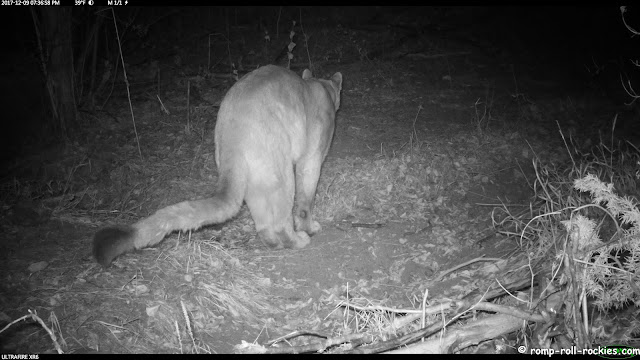 He left the view of the camera a couple of times but kept coming back, always using his silent deliberate gait. 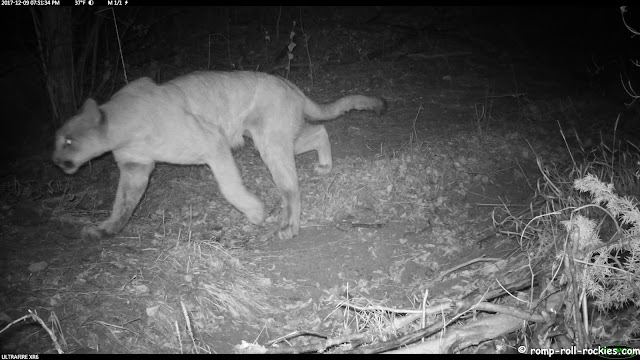 Knowing that these fierce creatures are out in the forest makes even nearby excursions feel like explorations (looking for signs of them) and adventures. I spent some time exploring near the water hole to see if I could find signs that the lion had made a kill there but I didn't find anything. However, they hide their kills well so I might have missed it.

Here's a video of this mountain lion's time near the dry water hole. It is not in slow motion. Rather, he was moving with such stealth that he moved very slowly.