At the end of May, Tiny the Black Bear met a young female bear. The behavior that my trail cams captured enthralled me.

Tiny is one of our biggest male bears, and he stamps his authority over our area by marking trees and stomping around the territory. 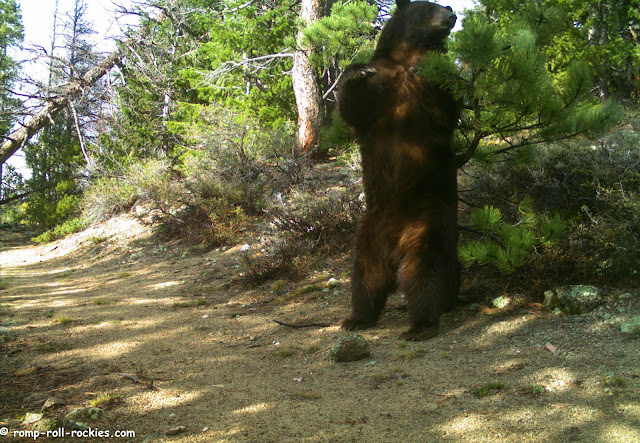 Earlier this summer, he met a young female bear during mating season. A problem was that a young male bear was hanging around on the periphery. My trail camera picked up footage of how a huge bear like Tiny handles this type of situation. There was no need to fight - Tiny simply scared the smaller bear away with his behavior.

To do this, Tiny repeatedly marked one tree and then marched stiff-legged toward the interloper. He also vocalized, making grunting noises, and he clacked his teeth together. Teeth clacking is a universal bear behavior of anger or aggression. After that display, the younger bear was gone!

I never thought that I'd capture such cool bear behavior with my trail cameras. I was thrilled to see and hear these videos!

A little later, we see Tiny reunited with the young female with whom he'd been traveling. It was the height of mating season so I suspect that the female will be having Tiny's cubs when she's tucked away in her den this winter!

Here's the video, which you can watch here or at Youtube!