Tiny the Black Bear Survives a Stick Impaled in his Leg

Back in mid-May, I saw something disturbing on my trail cams. Tiny, one of our biggest male black bears, had a stick impaled in his hind leg. Look closely at his right hind leg/rump. 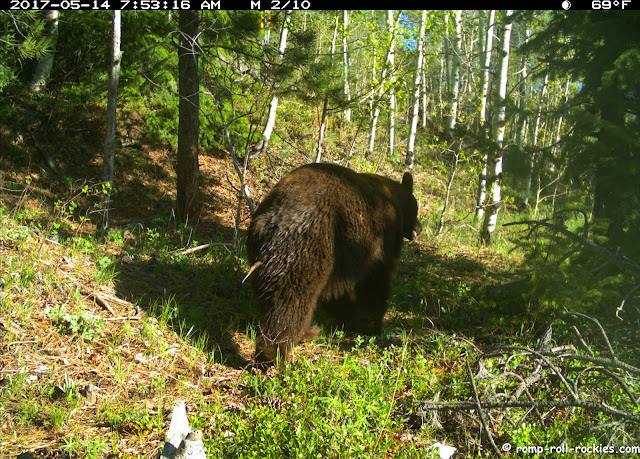 Then, two days later, he walked past with the stick gone but an obvious open wound. 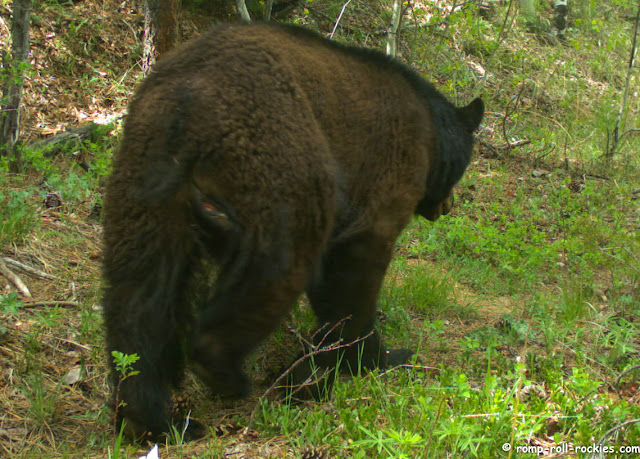 At first, my footage of him showed no limp and plenty of energy. However, by 3 weeks later, he looked terrible. He'd clearly licked the area extensively and the fur there was very thin. He had a painstaking limp, and he was not marking trees that he'd normally mark dramatically.

I was worried. My guess was that he had an infection. I wished that I could somehow give him an antibiotic. I laughed at myself for even thinking such a thing.

Then, he disappeared for a full 8 days. That is extremely rare during mating season. I worried even more.

Then, to my utter delight, I found footage of him on a couple of cams. I could still see some evidence of thin fur on his hind end but it was already much better. It's molting season too which probably helped that to improve quickly. Plus, he was walking nearly normally, and he was marking trees again!

I made a video of the various stages of his saga. At the end, he was walking "normally". By that, I mean that he was walking like a bear near marking trees in mating season. He was using a gait sometimes called a "cowboy walk". It's a way of grinding his paws deep into the dirt to leave maximum scent from his paw pads.

Near the marking trees, there are bear tracks which are impressions of exactly where every mature bear who passes that spot places his/her paws. It's extremely hard to see or photograph but it's easy to feel. For a bear as big as Tiny, he has to shorten his stride to hit the right spots. Plus, he swings his hind legs out to the sides as he walks when he's in these tracks - the "cowboy walk".

After all that technical stuff, the main thing is how relieved I am that Tiny is okay. We have two main male bears in our neck of the woods, and they've ruled for about a decade, as far as I can tell. I'm glad that this spring was not the time that we lost one of them.

I'm a very happy bear observer today!
Posted by KB at 4:00 AM