It's the season of fawns and kittens. The fawn showed her sweet face first. I believe that she was very very young based on her odd posture and crazy leg motions when running.

This was the first view of her, with her mother nowhere in sight. 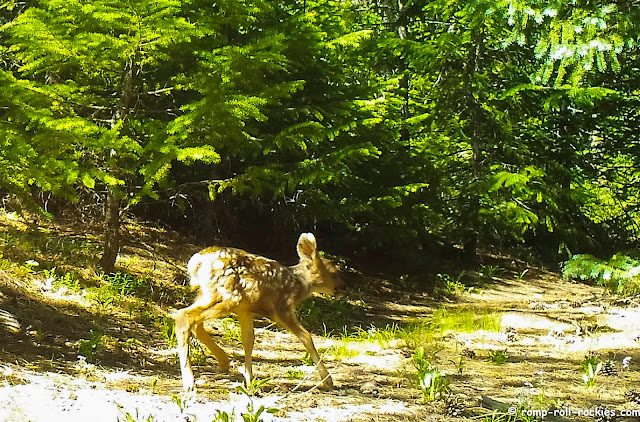 In the next view of her, her mother's tail is barely visible further down the trail. That fawn looks scared! 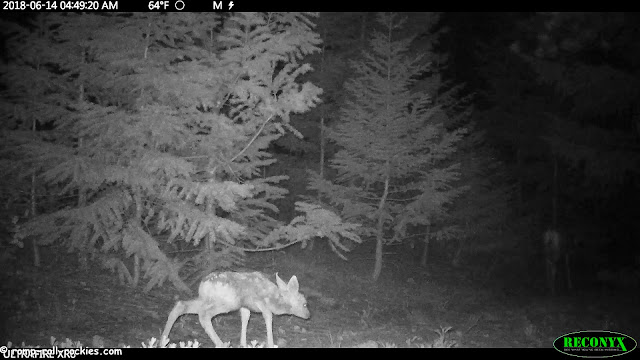 Seeing that seemingly helpless fawn made me cheer for her to survive. Then, the fiercest animals in the forest arrived just a few hours later.

First, just the mama mountain lion was in front of the camera. 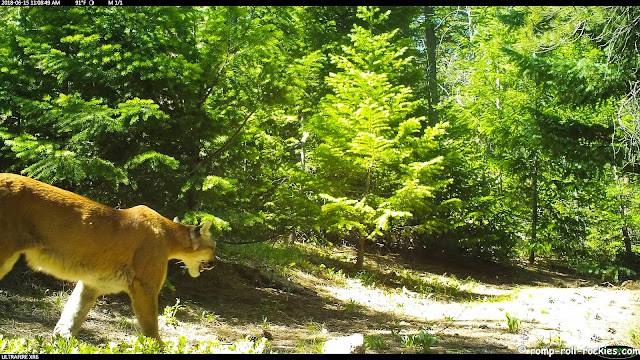 Then, one of her kittens emerged from the pine trees beside her. She had two kittens with her but one was lagging a bit. 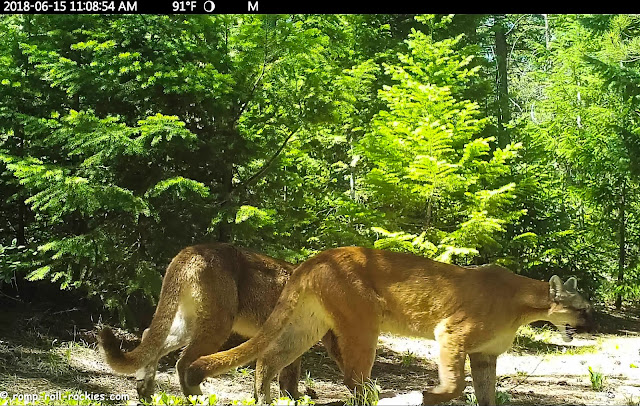 My first reaction to seeing these animals on my trail cam in this sequence was "Oh no, I hope that the lions didn't get the fawn...".

But then I thought a little harder about it. The mother mountain lion has been nurturing these kittens for about a year. In other views of this family, the mother looks very thin. Indeed, she is thinner than her kittens and thinner than most mountain lions. Life is very tough for our top predator, and there are about a hundred deer fawns for every mountain lion kitten... So, I resolved not to root for anyone.

For either of these single parent families to survive, other families are going to have tragic losses. The mountain lions need food so they might kill the fawn or her mother.  If the doe and fawn escape predation, the mountain lion family will be hungrier and a few thousand calories closer to not surviving.

The natural world is cruel because it is not possible for everyone to win.

My cams captured some more footage of the mother mountain lion a week later and a few miles away. She had lost her kittens, probably only temporarily, but she was calling for them incessantly using high-pitched and piercing chirps. I can't show you that in a photo but it's in my video.

I believed that I heard the same chirping as I checked a cam today. It might have been my imagination. Maybe it was a bird or a rodent... but I thought that a mountain lion was nearby. I stayed calm and departed the area. I may never know if I was correct (unless the next check of the cam shows a mountain lion just behind me - that happened once a few years ago).

Here's the short video. You can watch it here or on Youtube.


Every piece of our ecosystem is precious.
Posted by KB at 4:00 AM