A couple of ponds nearby have intrigued me for years because I wonder what kinds of wildlife visit them. Water sources are not common in our neck of the woods. By this time of year, most of the smaller ones have dried up.

Imagine my delight when the owners of the ponds said that they'd love to have me put wildlife cameras near them! As you can see from the photo below, there was some fun action at the ponds in late September. 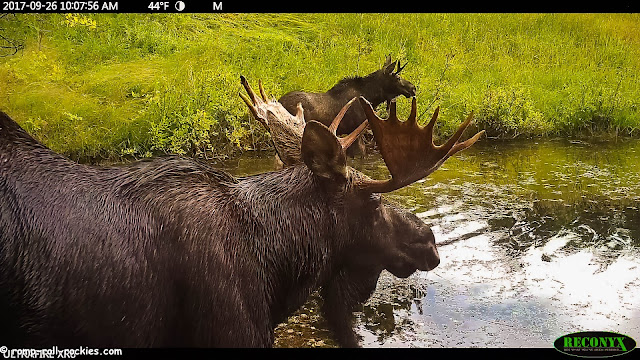 I compiled a video of the visitors over the first 3 weeks of September. First, a flock of wild turkeys showed up. They drank from the pond but didn't go into it.

Then, our first bear arrived. He was curious about the trail cam, which makes me think that he's a regular there who noticed that something had changed. He started by examining the cam and fogging up the lens. He then headed into the pond for a swim. After he came out of the water, he rolled around on the grass, much like a dog would do!

Soon there was another bear visitor. It was easier to see this one as s/he swam. This is my first experience with bears actually swimming. Most of my observations have been of very shallow water sources.

Next, the moose came around at the second pond. The first view of them showed only two moose, both bulls. Then, it sounded like a freight train was approaching. It turned out to be a third moose who was galloping through the water!

Last but not least, I included a clip of a mother-calf moose pair in the water at night. I loved hearing the mother "talk" to the calf.

I hope that you enjoy the video either here or at Youtube.