Tiny the Black Bear Hanging out with Sow(s)

Black Bear mating season is in absolute full swing. Every single video clip that I get of Tiny, our biggest black bear, shows him with a sow.

Tiny is a bear who you cannot mistaken for anyone else. He is truly gigantic. My guess is that his weight is north of 300 lbs. 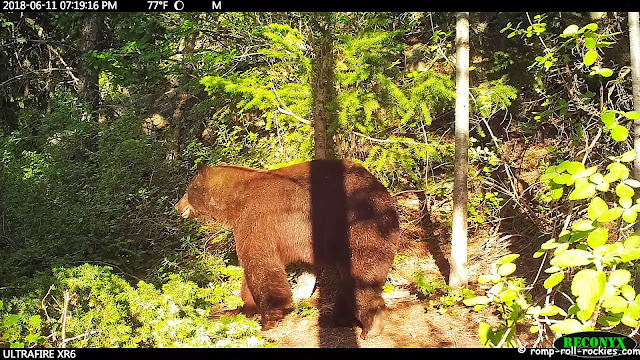 His size really scares people who see him. I've had to soothe the fears few neighbors who reacted to seeing him by wanting to call the wildlife authorities on him. However, if you observe the role that Tiny plays in our bear population, it becomes clear that he really just wants to be a bear. He doesn't want to be near people, except when bear crops fail so he's too hungry to resist the garbage and bird feeders that people carelessly leave out. Every year, I hope with all my heart that he'll survive the dangers of humans to rule our bear world again. 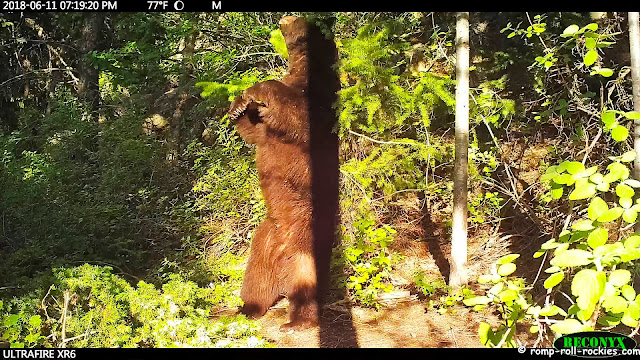 For the second year in a row, he's having issues with his hind leg fur. Last year, it made sense because he had injured the leg. This year, I don't know why he's lost a patch of fur.

It's not slowing him down with the ladies. The two photos above were from the only couple of hours that I've seen him without a sow this month.

His massive stature and handsomeness don't mean that the sows just worship him. In fact, one of the smaller sows decided that he was being too forward, and she rebuffed him. He approached her with a laser focus while grunting at her. She bared her teeth and pushed him with her two front paws. She surprised him with her feistiness! This was the instant when she pushed him away. 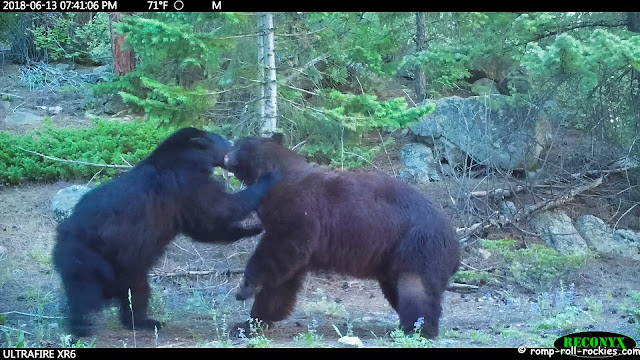 I made a short video of Tiny's travels with the sows over a few days earlier this month. Be sure to listen to the audio as you watch the video. Bears often vocalize when they're with other bears. You can watch here or at Youtube.