Feeling some blues. One of the repairs to my shoulder from surgery four months ago has probably failed. The decision about what to do is obvious to me. No more surgery on it. This photo fits my mood.

I do know how grateful I am to have this river running past my house. Its sound and sight is so soothing. 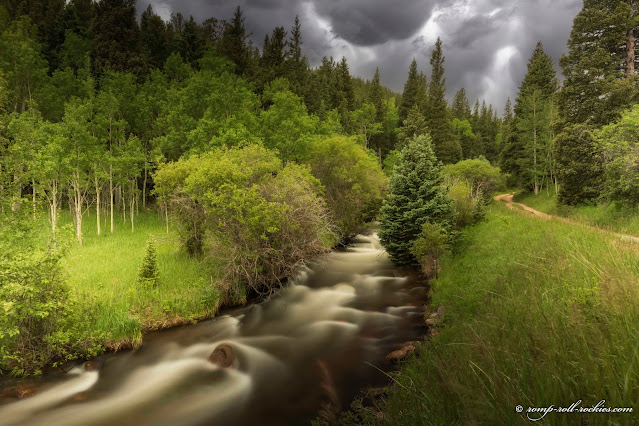 Time to head outside and ride my bike along side this water.
Posted by KB at 8:43 AM 12 comments:

Caught by a storm

A couple of days ago, I climbed up high on my bike. The route was forested so I couldn't see the clouds building over the Divide as I pedaled. When I popped out above treeline, the flowers, the water, and the threatening sky were stunning. I took a couple of quick photos and fled downhill away from the storm. Alas, I couldn't outrun this one. I ended up huddled under a small spruce tree as hail pelted out of the sky. Despite that, I was so grateful for seeing this beauty and for living so close to it. 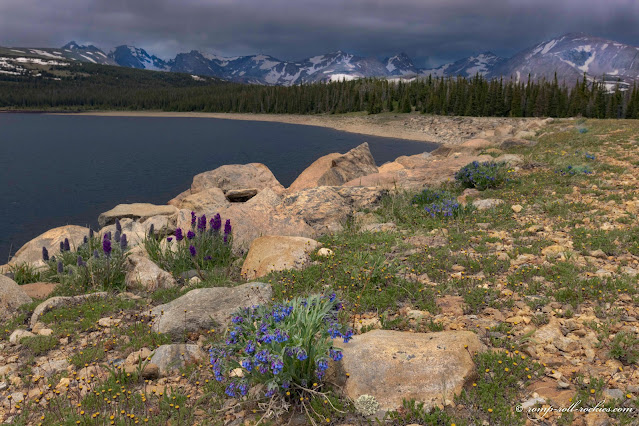 Happiness in a storm

A theme in my life over the past few years has been learning to see the beauty even when I'm scared by a storm. I'm sorry for being so inconsistent here but I've needed time. I'm finding my way but I'm not there yet. Perhaps I'll never be but I sure have learned a lot in the journey. 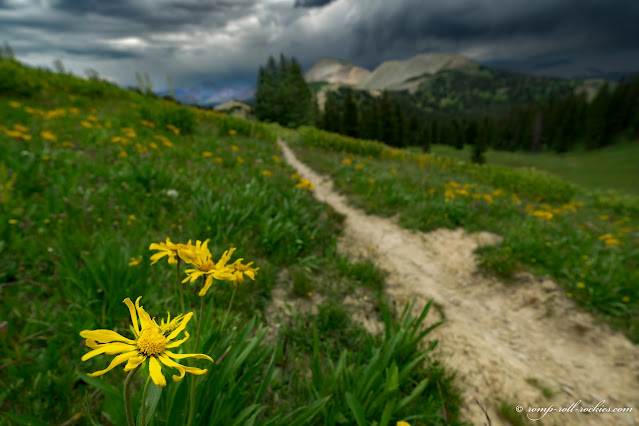 There's no place in the world that I'd rather be. The wildflowers are popping and the birds are singing. 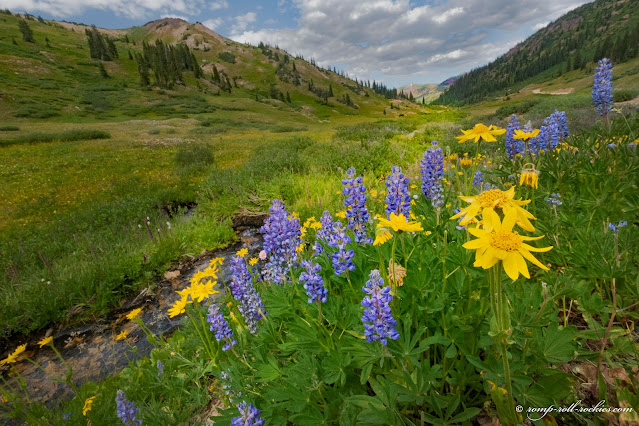 As I rode my bike in the desert, I scanned the landscape. This bunch of paintbrush flowers stunned me. I saw it from a long distance, parked my bike, and headed onto the desert floor to see them closer. The red against the white sand was brilliant. It was a testament to how being present in the moment sometimes shows you the beauty in the world around you. 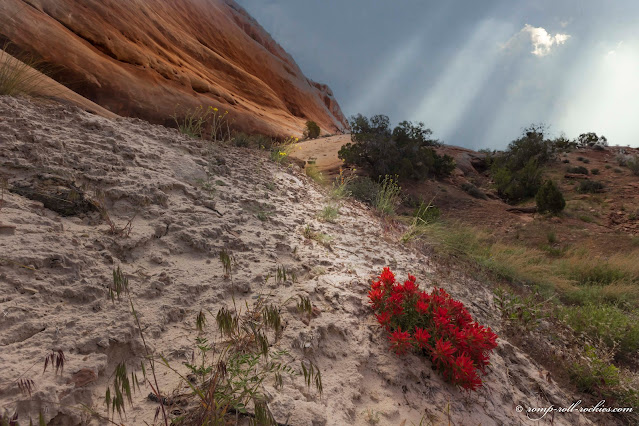 A Miracle - Tiny the Black Bear Appears at Lab Valley

I've been following the biggest black bear I've seen, who I dubbed "Tiny", for years. I spotted him with a cam near my old home in April. Then, he disappeared from that area. He's an older bear so I began to suspect the worst.

I said to the Runner that I was so sad because I thought that Tiny might be gone. When I said "gone", I meant dead. Young and hulking male bears have moved into his territory near our old home. They could have fought him and killed him or simply driven him out.

Then, I said the key thing -  "Isn't it odd that a bear who marks trees while sitting down, just like Tiny, has recently arrived near Lab Valley?".  Bells went off in my head. Maybe the bear near Lab Valley was Tiny. I thought that the probability of that was SO low that I didn't even start comparing their images until a full day later.

After staring at videos to compare Tiny near our old home and the new bear near our new home, I concluded that it was Tiny at our new place!!!! He has been here for close to a month, last seen with a sow near a water hole. Can you imagine the sheer luck to have made that happen? There are literally thousands of acres of forest land between our old home and our new one. How did I get so lucky?
Questions abound. Did he get fed up with the crush of people, development, and noise near our old place like I did? His habitat was rapidly diminishing there. Or, does he do this commute every year? I know that he disappeared from our old place every year around the start of June until just before he entered a den in the fall. Maybe he was here in early summer every year.
I am SO filled with gratitude to have this magnificent bear near our new home. It makes it feel even more like home. I wonder how long he'll stay? Time will tell.
Check out the video of him at our old place and our new one.
Posted by KB at 8:47 AM 14 comments:

At sunset in the desert, there's a hidden expanse of slickrock where we love to relax. In the distance, we can see K's Rock - which looks like a series of red rock castles from this angle. Sights like this one take my breath away. 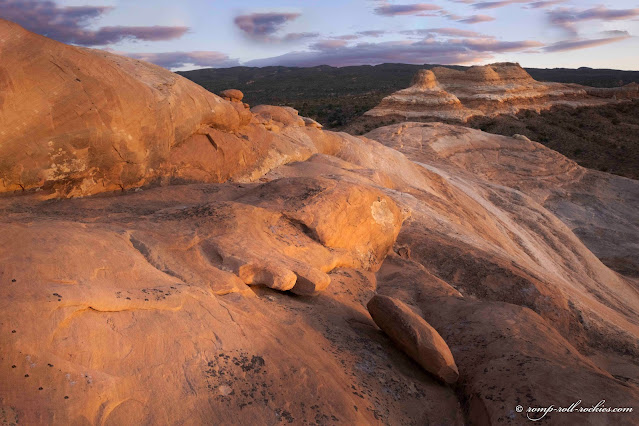 A long and restless nap by a bear

A big male bear lumbered in front of my camera. I assumed that he was scent marking and would be on his way soon as I watched the first few seconds of video. Wrong! Next, he dug a day bed in the thick carpet of pine needles. Finally, he lay down to sleep. He spent six and a half hours snoozing restlessly.

Check out the very condensed video! 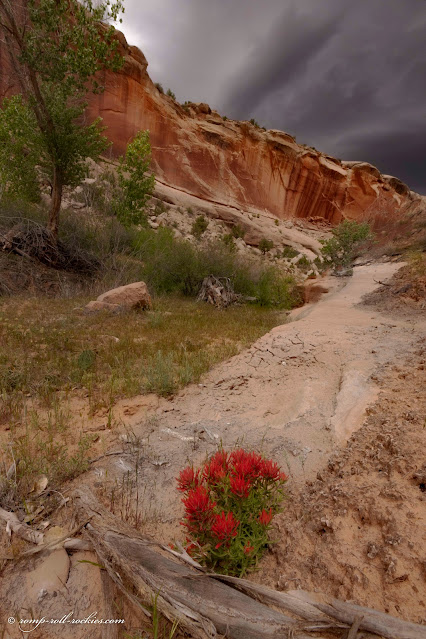 A storm was fast approaching on the horizon as I hiked in a wash deep in Utah's red rock desert. I felt the wind pick up and the air get colder. I began to hustle toward camp and our LabMobile. Then, I noticed a brilliant clump of Paintbrush at my feet. I stopped to appreciate it despite the threatening storm. Perhaps this is a metaphor for how to live life.
Posted by KB at 8:27 AM 13 comments: