Drama within the elk herd

When we first moved here, an old-timer told us that we'd "get sick of the elk" within a few years. That has never happened. 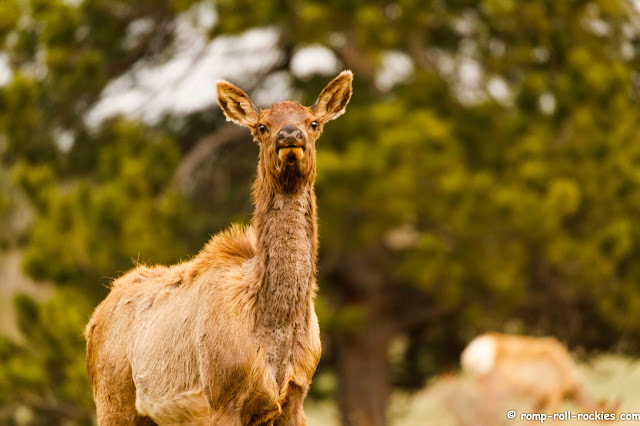 Oftentimes, we'll hop in the car to go see the elk when they're hanging out and grazing nearby. We usually don't need to drive because they're less than a half mile away. However, we've learned that they are spooked far more easily by people on foot than people in vehicles.

When we're in a vehicle, they often stand and stare at us impassively, with apparently no worries about us. 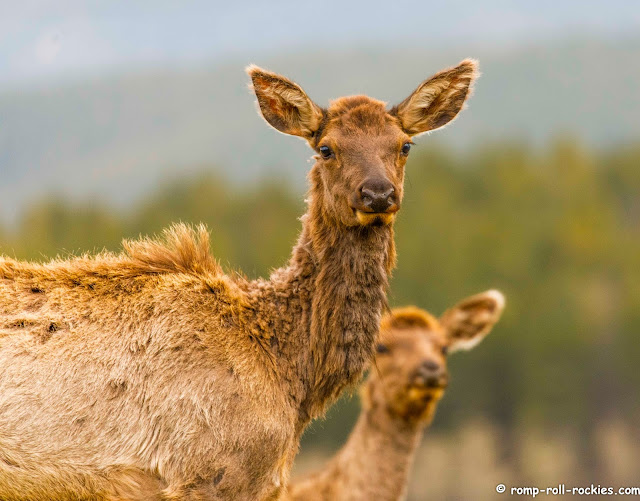 It always makes me laugh when we have an "elk traffic jam". When the entire huge herd is present, it can take a long time for them to cross the road, which makes for a humorous excuse for being late someplace.

The other evening, they were crossing in twos and threes. These two started across the road together. 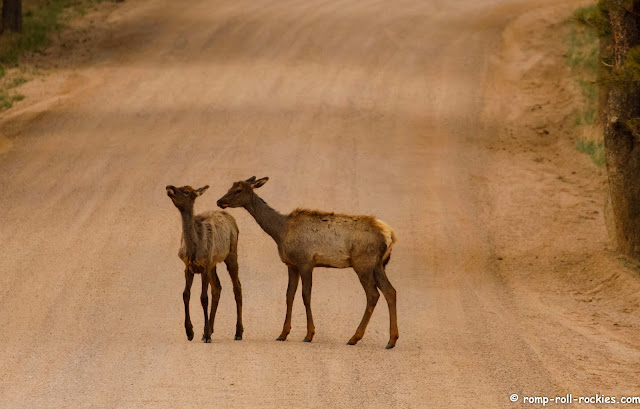 Then, the front one turned around to look at the the other one. Notice at how their ears are back, suggesting that they weren't entirely on good terms. 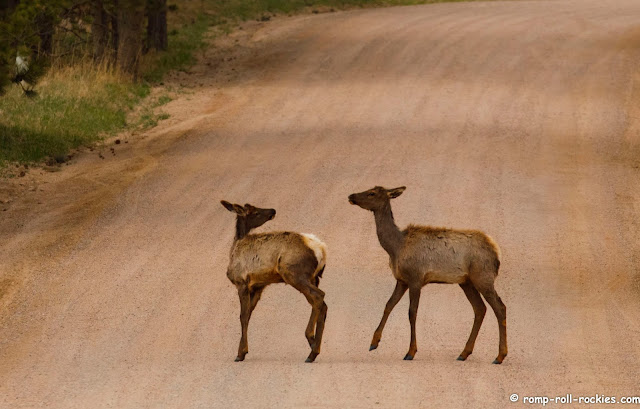 Then they both reared up onto their hind legs, looking each other in the eyes. 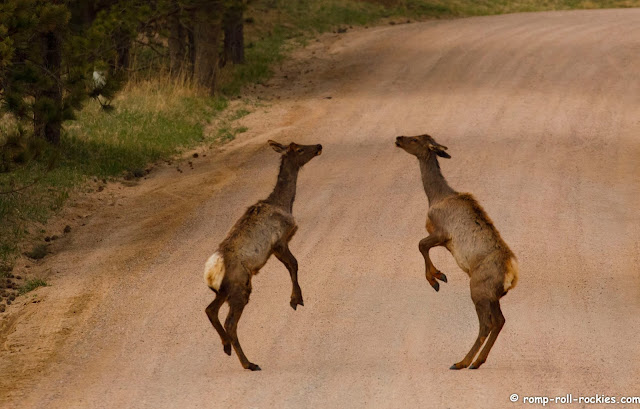 Soon, their front hooves started flying toward each other. Look at how flattened backwards their ears are. 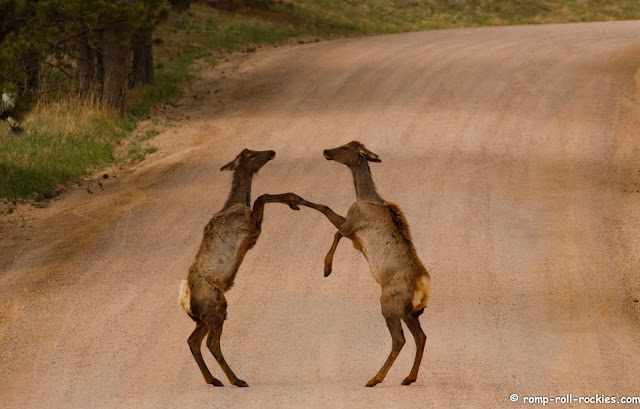 They continued taking swipes toward each other. I was amazed by how long they could balance on their hind legs. 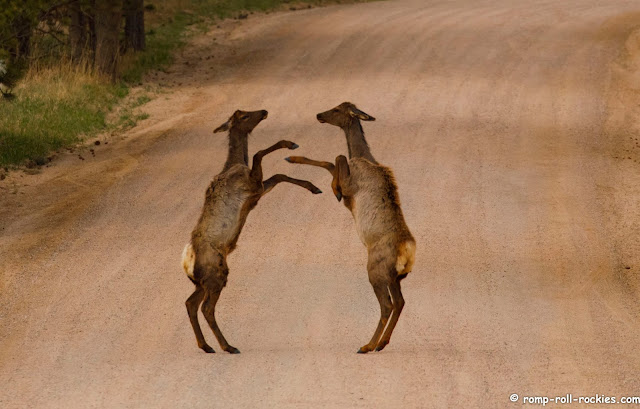 None of their blows appeared to hurt the other. I think that their hooves might have touched during this spat but that was all. Like so many animal behaviors, I suspect it was ritualistic, with neither elk wanting to cause injury. 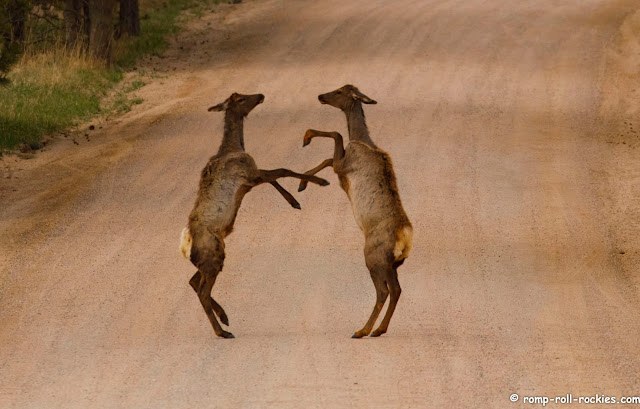 Then, they both returned to their normal four-legged lives. 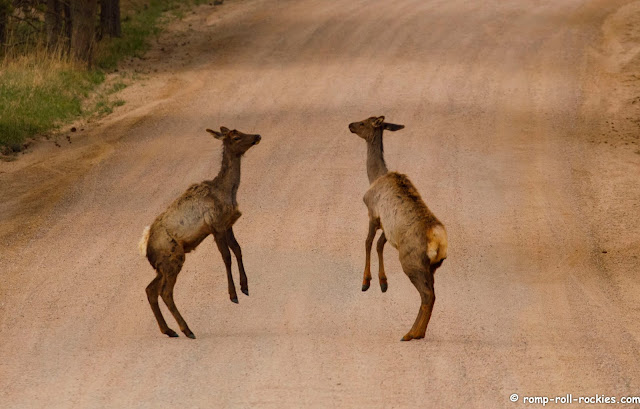 During their spat, they forgot that they'd been trying to go from right to left across the road. They walked back to the side of the road that they'd started on. 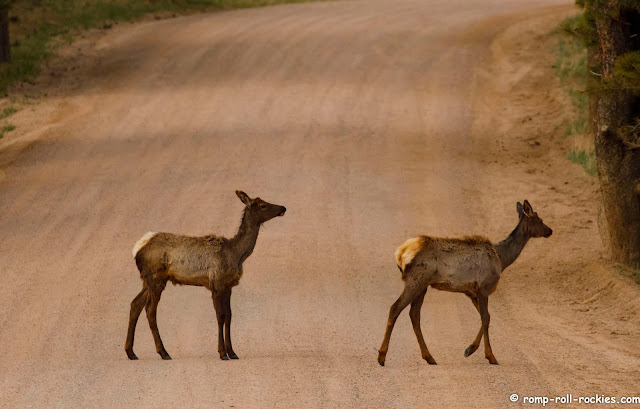 For the occupants of the two vehicles stopped by the elk crossing, it had been intriguing to watch the mini-drama between two cow elk.

Nope, I don't think that we'll ever be "sick of the elk"! Instead, we'll probably always go watch them when they are hanging out near our house.
Posted by KB at 4:00 AM