Two years ago: Bear Cubs Left the Den for the First Time

Some of you may remember the trail camera experience of a lifetime two years ago when I had cams placed outside the entrance to a bear den. In December, I'd discovered that a single bear was occupying the den. That discovery was amusing because I absolutely did not expect to see a bear in the den.

It had last been occupied in 2010 by a sow and her two yearling cubs. That year, I'd stumbled upon the den for the first time  to find an extremely scared sow looking at me as I peered into the black abyss of the cave.

Since 2010, it had not been occupied. Every year, I'd left a cam outside the den and then gone to check after I believed that all the bears in our area were settled into dens. And, every year, I'd seen no bears looking back at me. In December of 2015, I'd trudged to the den and cavalierly peered into the den. I yelped and jumped when two dark eyes were looking back at me. Then, the bear snorted at me... which sent me away in a big hurry.

After I calmed down, I went back with multiple trail cameras and placed them carefully outside the den. I stayed out of the bear's line of sight so she didn't snort at me again.

All was quiet at the den until January 30, when the bear began relentlessly pacing outside the den. We found out why when a trail camera caught the sound of cubs bawling inside the den in the wee hours of the morning of January 31, 2016.

Then, all was quiet again for a few months, aside from a visit by a fox who went halfway into the den in March. The mother bear's rest was over on April 10th when her two cubs began trying to escape the den. 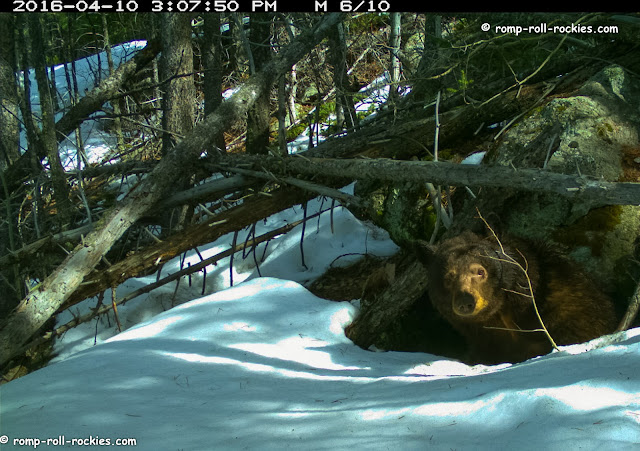 Each time a cub made it outside the den, mom would capture the cub in her jaws to drag the cub back into the den. 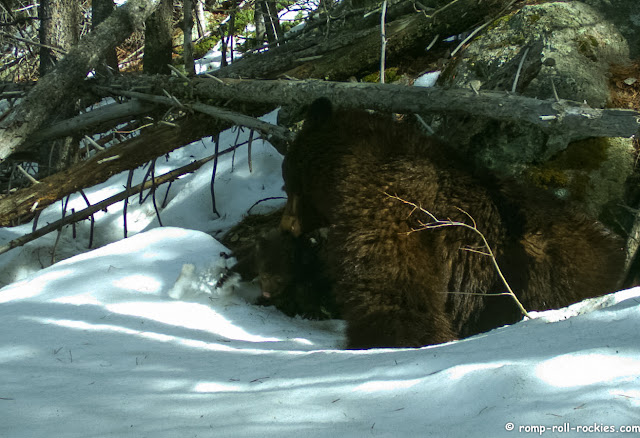 The cub would dig its paws into the snow, trying to resist the sow's pull. All the while, the cub was screaming like a human baby having a tantrum. 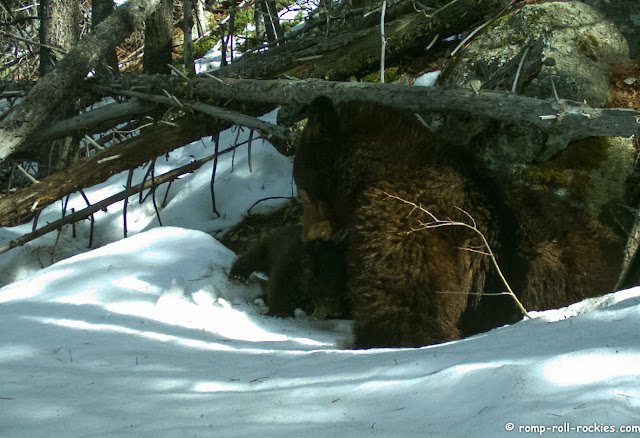 After mom pulled the cub back into the den, the cub would bawl inside the den for the next 10 minutes or so. The mother bear's restful winter was most definitely over! 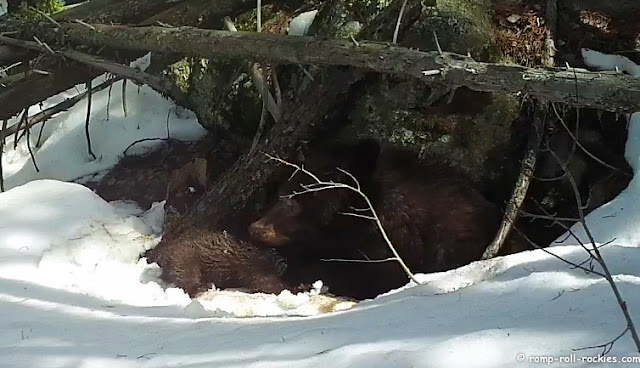 I have two videos for you. The first one is very brief but shows one example of mom going out to retrieve a cub on April 10th. It gives you a nice view of struggle between the big sow and the feisty cub. This is a clip that I just discovered that I overlooked two years ago. I hope that you enjoy it! You can watch it here or at Youtube.


The second video is a little bit longer and shows how the interactions between the mother and cubs changed over that pivotal day from 5AM until late in the afternoon of April 10, when mom gave up on keeping the cubs in the den. The video is below and also available at Youtube.
It's fun for me to revisit the winter of 2016 because I keep finding video clips that I didn't fully appreciate then. I was overwhelmed with video at that time, and now I have time to slow down to look for great clips. I think that the new video (the first one in this post) is a very fun example of the feistyness of the cubs and the patience of the sow.
Posted by KB at 4:00 AM