We had a true winter day yesterday. We woke up to at least a couple of feet of new snow and a temperature of -8°F. This was the view out our bedroom window. 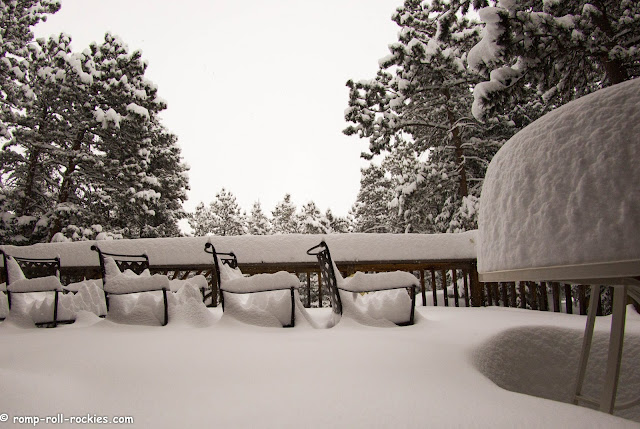 Those are R's chairs for his "speed crawling" exercise that we did until his most recent surgery. I'm guessing that they'll now be in the snow until April.

When I saw the temperature so far below zero, I went back to sleep. I really hoped that the air would warm up fast. It didn't. After much procrastination, it had reached a balmy -5°F later in the morning. That's when Shyla and I headed out for some snowshoeing. 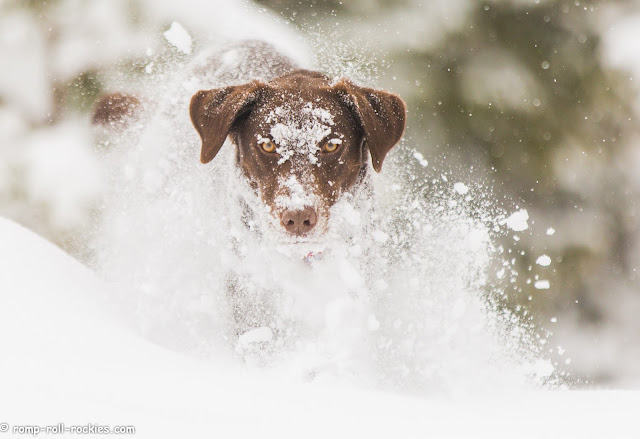 Look at how she even has snowy eye lashes!

Shyla wore her boots and stayed comfortable for almost all of our walk. Of course, she rarely walked - top speed porpoising through the snow was her favorite mode of movement. 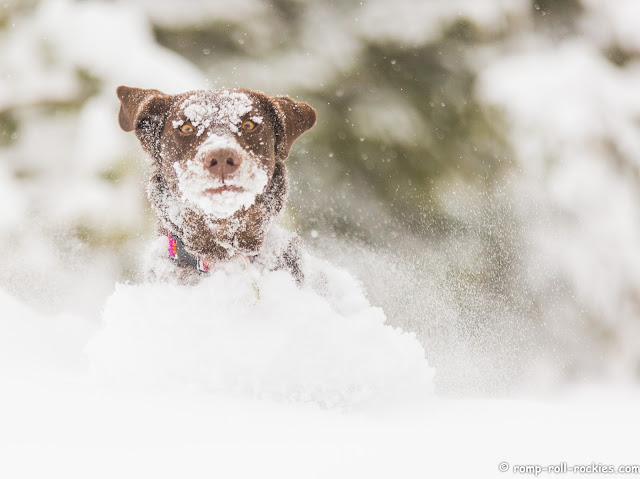 Absolutely no one else had been out on most of the trails we traveled. That meant that the powder was completely uncompressed and bottomless from the point of view of Shyla. 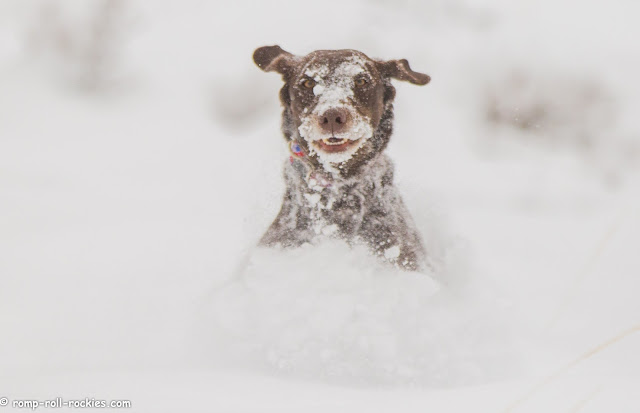 At one point, she stopped in her tracks looking ahead over a rise that I couldn't yet see over. However, I recognized the "serious look" that Shyla had which means that there's someone or something ahead that she thinks is scary. I called her back, and guess what I saw when I topped the small hill she'd been on? 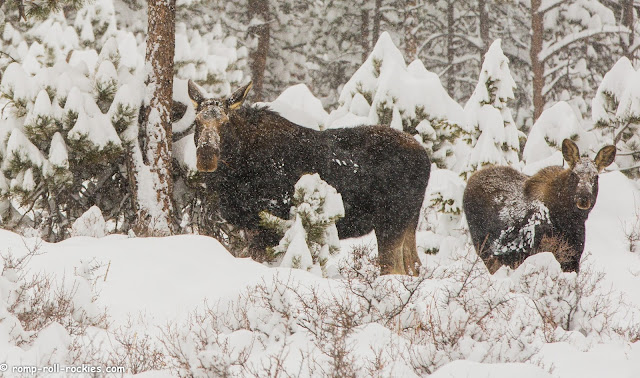 They mostly ignored me after Shyla did a sit-stay behind me. Of course, I like the photos from when they were looking at me best so those are what I have here. 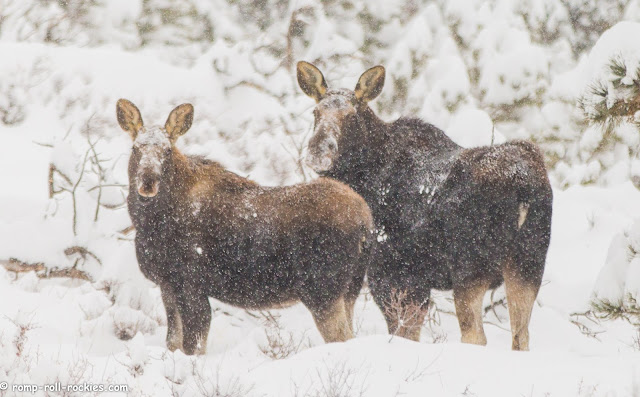 You can see that it was snowing hard so I didn't hang around for long. One more photo, and we turned around to avoid going near this mother moose and her calf. 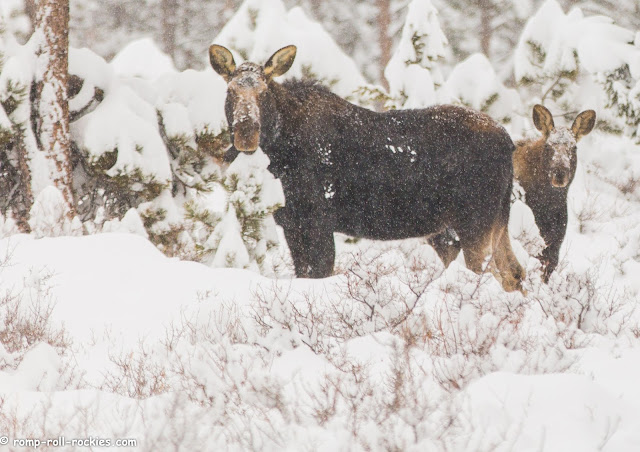 I thought that I'd hit the jackpot for the day but then I saw a pair of elk too! I love how the wild animals get "snow face" just like Shyla does. 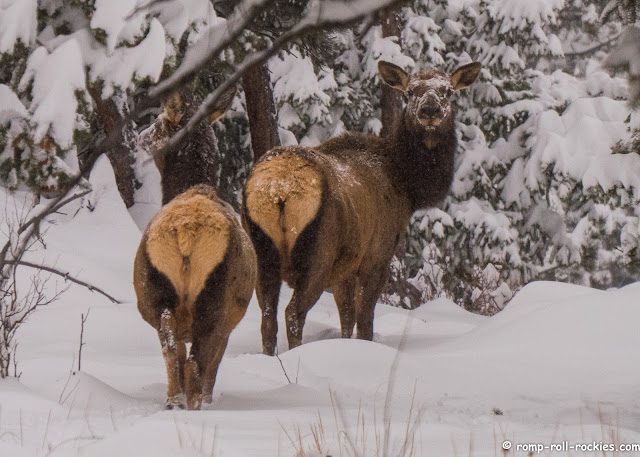 Fortunately, we weren't far from home after seeing the wildlife. Shyla seemed to get chilled while I snapped photos. 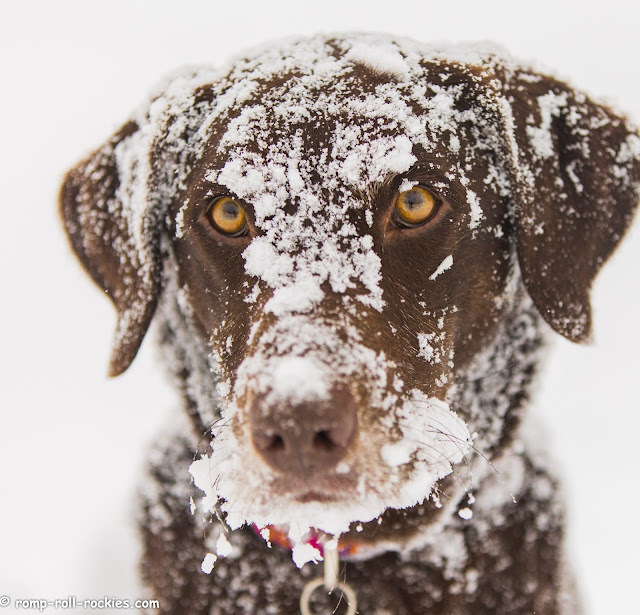 Can you blame her? She was covered in snow.

It was amazing how quiet it was today. I didn't see another human or even another human track during our entire outing. Then, I did a short bike ride on the road (for the first time since our last huge snow storm six months ago) because the trails were utterly impassable. I didn't see any vehicles. Almost everything was shut down today due to the snow so I guess that everyone stayed home.

One thing that I adore about winter is how the crowds of visitors from down lower in the biggish cities don't visit anywhere up here in the mountains but a few popular spots like the ski resort. We locals get to enjoy our little trail networks in complete solitude.