For those of you who have expressed concern about R missing my hikes, here's photographic evidence that the ghost of R goes for a run every single morning, supervised by the other biped in my house. The two of them run so fast that they leave a shadowy trail that's almost transparent. 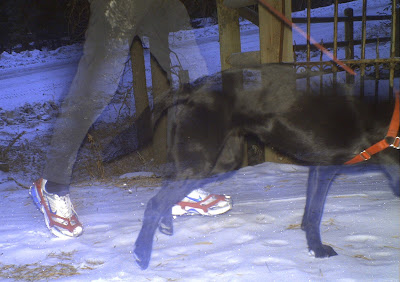 In contrast, a coyote walked with a swagger past the same spot before the snow began drifting from the sky. I've had a comment on my Youtube account that I ought to shoot the "verem" (sic) with reference to a coyote video. I feel so sad when I read hate-filled remarks like that one. This intelligent creature lives as part of a social pack, who interact with each other, share food with each other, and snuggle together in a protected place in storms. They are sentient beings who deserve our respect and protection. 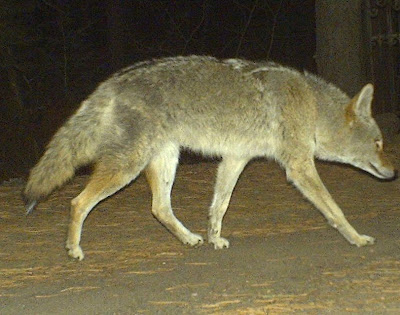 After accidentally finding the bear den last week, I spent a huge amount of time reading about scientific studies and talking with researchers who have first-hand experience with denning black bears. The reason for my frenzy of activity was that I wanted to put an infrared wildlife camera outside the den.

Despite the potential for learning a huge amount about the activity of denning bears, I feared that returning to the site might scare the bears into moving their den. That outcome would be bad for the bears because they'd expend precious energy walking to a new site. Incidentally, according to researchers, bears seem to catalog where nearby alternative dens are before entering hibernation. So, if the ursines are forced to move by something like snowmelt flooding the den, they usually walk directly to a new den and go back to sleep.

Based on my research, I learned that it was very unlikely that another visit (with no dogs present) or posting a camera would cause an extreme reaction by the bears. A very convincing study told of putting cameras outside 13 dens and checking the cameras weekly throughout the winter (Bridges, A.S. et al., 2004). None of the bears deserted their dens and all survived the winter looking healthy. A fascinating finding from that study was that adult bears came out of the den to stretch their legs almost daily. Aside from that single study, it seems that no one knows very much about the daily behavior of denning bears.

After my research, I decided that I would put an infrared camera outside the den, set to take a 1 minute video every time an animal moved in the area just outside the den. The video will be in color during daylight and black/white during dark hours. The 'flash' is a soft infrared light that's much less shocking than a regular flash but doesn't allow color nighttime images.

But, there was one problem. A snowstorm was supposed to hit today and tomorrow, and I knew that I wouldn't be capable of hiking to the den site through a foot of new snow given my still fragile neck. So, we hurried our plan, and placed the camera yesterday.

After the difficulties my partner and I had in finding the den for a second time, I'm astonished that I spotted it the first time. The den sits in exceedingly rough country, like the boulder-strewn hillside shown below. However, it sits on a north-facing slope so snow surrounds and covers many of the boulders and fallen trees. 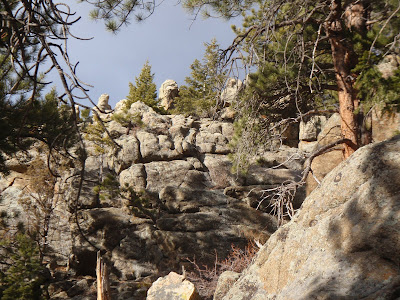 We hiked, wandered, and scrambled for quite a while before finally spotting the den. All of this searching was needed despite having a GPS waypoint to lead us to the den. Here was the first glimpse of the den site, a bit out of focus, but the debarked trees were my landmark. I've read that bears like to strip the bark from pine trees and eat the sweet sappy cambium layer that lies just below the bark. One wildlife researcher who I talked with in the past few days has tasted it to find out why bears love it so much. She wasn't as enamored of it as the bears obviously are! 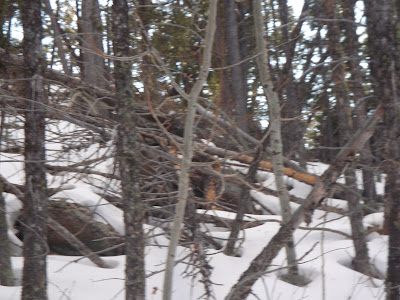 We tried to be as quiet as possible as we approached and spent only five minutes at the site. We placed the wildlife camera, encased in metal protection, with the view shown below. Bears get very curious about new objects in their environment so I was repeatedly told to protect my camera in some way in case a bear swatted at it. 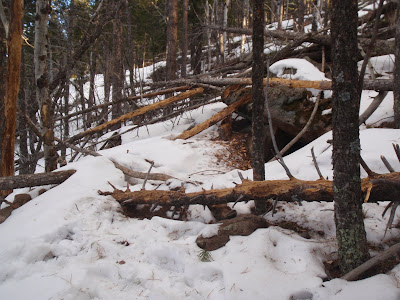 I checked for tracks, and the bears had not left the den since my visit the other day. That relieved me immensely - making me think that my impact had not been huge. All the tracks in the photo above are mine.

No other animals had left tracks by the den entrance either. One interesting thing that I'll learn from my videos is which forest animals dare sniff at a bear den. I wonder if a mountain lion will check the den? I am absolutely certain that a lion patrols this hillside based on tracks but I have no idea if he'll go near the den.

After putting up the camera, we peeked into the den. Both bears were silent but had their eyes open. However, their eyes had that glazed look of an animal or human who's pretty much asleep despite somehow propping their eyelids in the upright position (i.e., like me every morning). The yearling cub occupied almost the identical spot in the den as a few days ago. 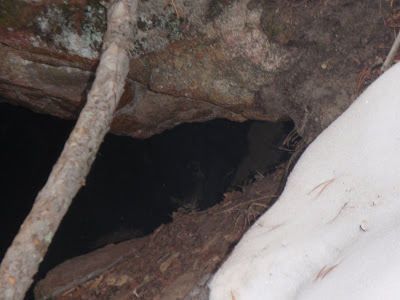 Mom still blocked the main entrance to the den. She stirred a little but seemed sleepier than the cub. 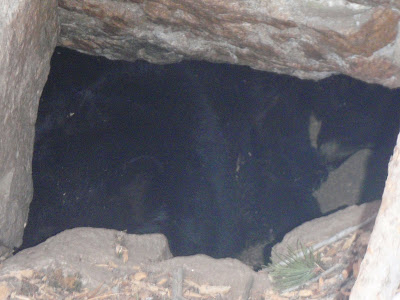 My camera has a battery life of 4-6 months so I can wait until spring to check again. My only worry is whether the memory card capacity is large enough if indeed the mama bear comes out of the den as often as the previous study claimed. I'd assumed that I'd get a couple of video clips but not frequent ones.

As we departed the den, the sun shining behind the clouds and hovering over the mountains made an other-worldly mosaic. I hope that the sun shines metaphorically for the mama bear and her year-old cub. I hope that my camera shows two healthy bears happily departing their den in the spring. 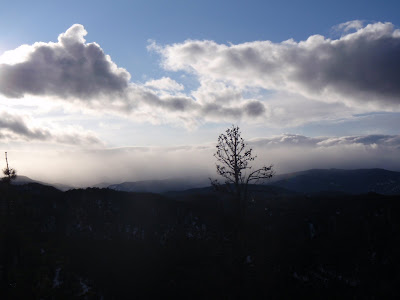 I was glad that we placed the camera yesterday because snow arrived today! The boys in our pack planned a run at a nearby trailhead so K and I tagged along and hiked from the same place. I'm anxious for the day when I can drive myself places to go hiking!

We had a sweet and peaceful hike, in a place where I usually ride my bike solo. We climbed up one of my favorite ridges and enjoyed the soft shushing of the snow as it wafted down on us. K climbed boulders. In the photo below, the background is a favorite mountain bike climb of mine. In fact, it's the climb that I visualize when I do hard intervals on my stationary bike these days. As I sweat and labor on my indoor machine, I imagine myself spinning over the rocks up the steep face to the very top. 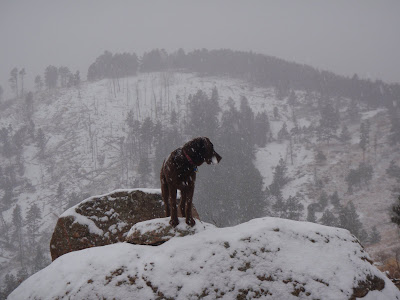 As we hiked along the ridge, K galloped ahead with high enthusiasm and periodically stopped to wait for me. Today was the first day that K seemed like she'd attained her normal energy level since her surgery. It made me smile. I'm next in line to refind my energy! 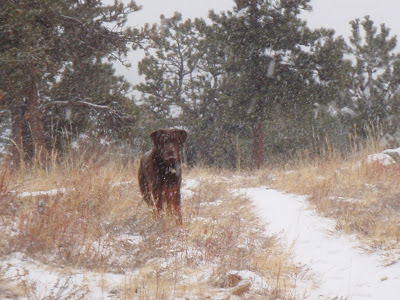 As we passed the spot where I found the tracks of a mother mountain lion and her kitten in early winter, I found some cat tracks in the freshly fallen snow but I wasn't sure if they were bobcat or a lion kitten. As you can see below, the track looks much bigger than a normal bobcat track (my handwarmer is 3.5" long). Moreover, the walking pattern, with the back paw overstepping the front paw print, is one that I've seen in lion tracks but not bobcat tracks in snow. Bobcats usually place the hind paw exactly in the front paw track when they're in snow. Based on all the evidence, I suspected that the tracks were left by the young lion but I couldn't be sure. 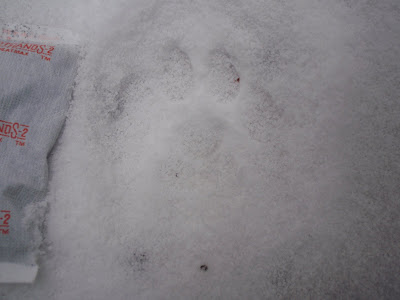 Today, I felt like I had a chance to show my best hiking partner one of my favorite places. K seemed to burst with enthusiasm for exploring a new place. We both ended our hike happy and snow-covered. 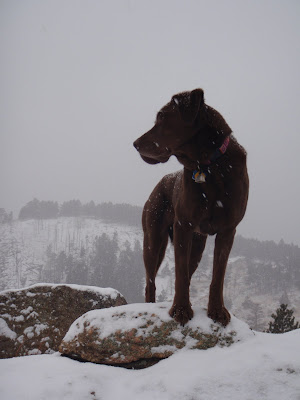