I have a delayed surgery hangover, at least that's what it feels like. I keep reminding myself that I know that this process is a roller coaster, and that I want to make the best of each day, no matter how I feel. But, I do have to admit that I've been slogging through this day like a slug in the snow. I'm tired beyond my understanding and my pain has escalated, again.

But, on the bright side, the sun rises noticeably higher in the sky each day. Sunglasses are becoming required gear, even for early morning walks. And, especially for someone who feels like they've been hit on the head with a sledge hammer.

As K galloped and I plodded along a snowy hillside, I spotted the first budding leaf of the year. It's on a Buffalo Berry Bush, and the leaves are born brown, before turning green later in the spring. 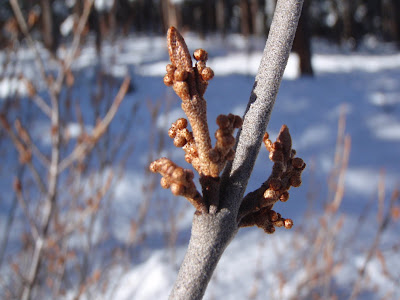 Those buds are a sure sign of spring - and a symbol of how tough this plant is. We're certainly going to be hammered by at least one more big snow storm with 3-4' of accumulation that will completely submerge this plant. Yet, it will survive.

And, yet another sign - one of 'our' regular coyotes is in heat! She left clear signs, a melted tunnel of yellowish urine but then spots of blood around it. When I looked in my most comprehensive tracking book, it described what I saw as a sign of estrus. If 'our' coyote breeds now, it will be 63 days before her pups are born. Another sure sign of spring. I'll spare you the photo, but can anyone guess which reader is going to ask to see the photo? I can.

K and I plodded up toward Hug Hill, with my head pounding so much that I considered hiking with my eyes closed. Headaches are a hallmark of cervical disc issues so they're a constant companion of mine. But, this one is still a doozy, despite my medications. I veered into the dark forest to avoid the blinding sun. 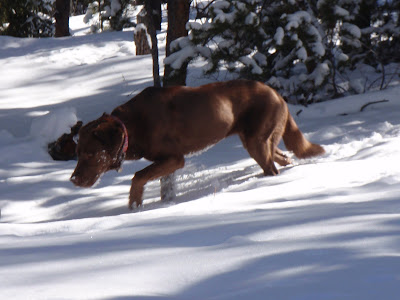 Soon, we emerged from that forest. I love the beauty of those transitions... 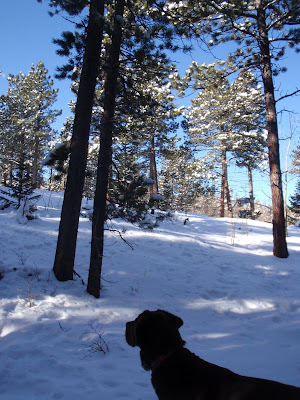 However, when we reached the brink of the summit, I forgot my headache. The wind had sculpted the snow into waves and peaks. The drifts made me taller than the tree on the summit. Wow. 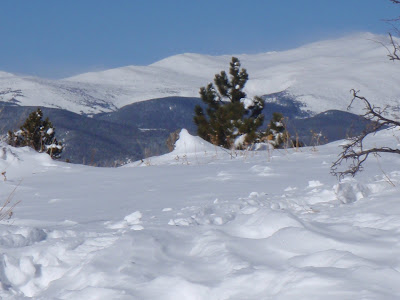 K was the first to summit since the snow sculpting, as you can tell by her tracks leading to where she stood defiantly on the top. 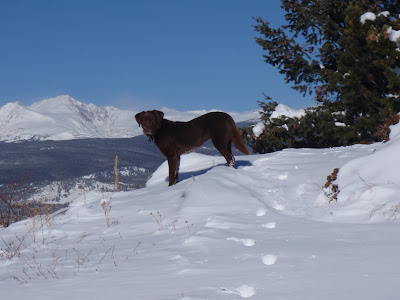 Then, she started obsessing over something to the west of the peak. The last time that she obsessed like this, we found fresh mountain lion tracks just below the peak. I remembered that and called her to me. Look at her enthusiasm! 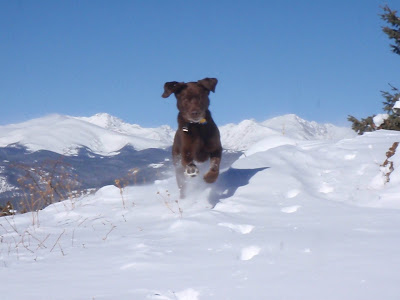 We dropped down the west side of the hill, with K on leash, to explore. I couldn't find any sign of what had her so wired. When we hit a trail well below the peak, I let her off-leash. Her body language said that the object of her obsession now sat above us on the slope. I never figured out what it was. 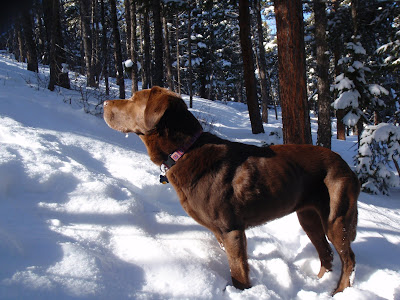 We cut our hike shorter than usual, and I collapsed into a deep sleep a little later in the day. Oh my, I haven't slept like that during the day in a long time. To put a positive spin on it, my mantra is that feeling tired means that I'm healing. So, feeling tired is a good thing. In fact, it's an excellent thing! Please don't burst my bubble...

This afternoon, I'll take both pups for an outing on the trails that I hope is as beautiful as yesterday's sunset hike. We hiked up to a ridge/plateau, and R led the way. He gazed over the meadows below us. 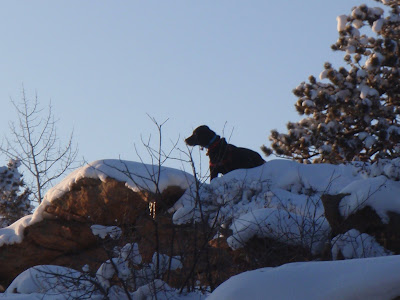 When K arrived up there with us, the setting sun set her fur ablaze with warm chocolate color. 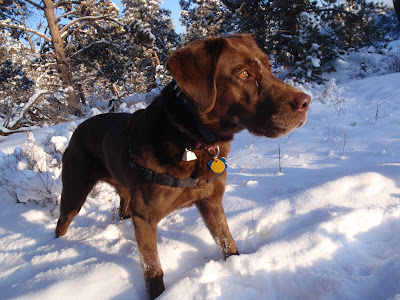 Even the snow itself took on a magical hue. 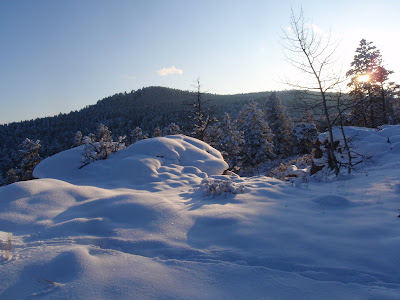 The chocolate and the black lab bathed in the setting sun rays. 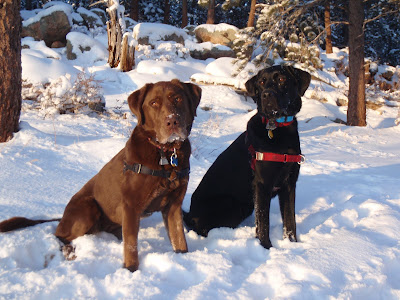 And, the mystical mountains hovered in the clouds just after the sun dropped below them. 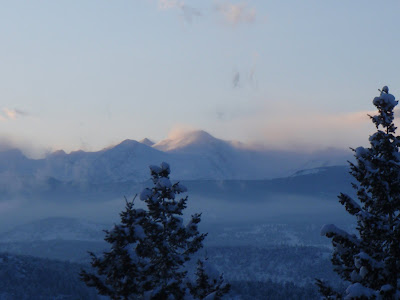 As promised, I will soon post a video of K's scent training. Seeing that will show the dramatic differences in the personalities of K and R. When I train K, my rule is that I cannot allow her to ever feel that she failed. As soon as she believes that she has made a mistake, she gets nervous and loses the ability to learn. She randomly and frantically tries behaviors, thinking that she might accidentally choose the right one. So, with K, I take little tiny steps, gradually building up to the final goal, but never taking a giant step that might lead her to melt down.

As you saw with R, my training strategy can be much more aggressive, with me trying out whether he's ready to take giant steps forward, without worrying whether he'll shut down. He wants to earn treats so he strives to make the correct choices. But, he doesn't worry or get scared when he makes the wrong choice. Rather, if he fails to earn a reward for one action, he tries modifying it a little to see if that's what I want. Consequently, I can teach R new behaviors much faster than I can teach K. And, I've used identical techniques with both (except for using a verbal 'yes' with R instead of a clicker) - so it's an intrinsic difference, deep in their psyches, rather than a reaction to anything that has happened to them.

One reader asked to see some video or for me to write more about clicker training. That will definitely be included in future training stories because I clicker train K and plan to do the same with R in the future. But, in the meantime, let me search out a good video of clicker training at its finest. Some trainers can teach a dog a new trick incredibly easily using a clicker (they're much better than I am). Any suggestions from readers?
Posted by KB at 4:50 PM