After spending my hike yesterday searching for signs of a bobcat, a handsome feline dropped by our territory yesterday evening. He or she must have known that I needed an infusion of the bobcat spirit.

Just before the bobcat's visit, we saw our local dog seven-pack and their human while we hiked our trails around sunset. A storm sat on the western horizon, painting the sunset a dusky blue. 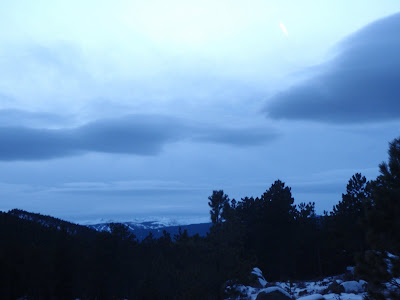 The local dog pack has a new leader, a young GSD, who likes our dogs much more than the rest of the pack. The GSD ran ahead and met us, all wiggles and happiness. He immediately sensed R's playful soul and tried to entice him to play. The pack, as a whole, scares R. Consequently, he looked afraid of the GSD who was doing frenzied play bows. 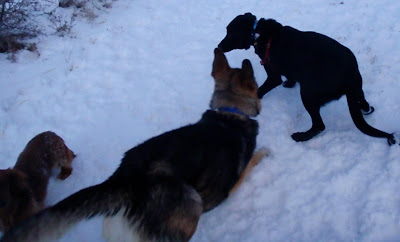 Their pack is always spread out over a large area so I never capture full feeling of insane pandemonium in a single photo. But, they are seven crazy dogs, and all the dogs in the neighborhood have a healthy fear of them.

Yesterday, as we chatted with our neighbor, the other dogs wandered away, and R began to look interested in playing with the GSD. 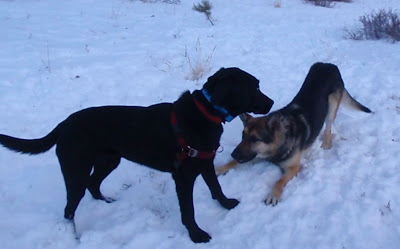 Soon, R and the GSD started running around, and I thought that a full-fledged play session was about to erupt. Just as they started to play, the other dogs noticed and burst into frantic high-pitched alarm barking. In response to his barking pack, the GSD's body language became assertive while R began to shrink. Notice how the GSD was leaning forward and looming over R. K became worried about her little brother at that instant and started sneaking toward them. 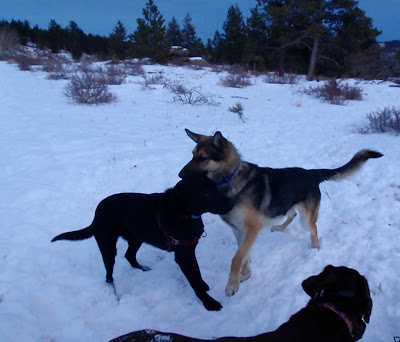 As the cacauphony of barking escalated, R planted himself under his favorite human's legs, and K protectively stood over him. The GSD started licking K's chin in what appeared to be a conciliatory gesture. 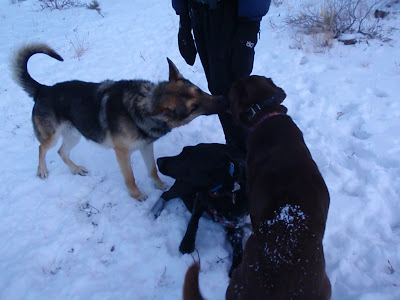 Then, the GSD backed off, and the rest of our chat was uneventful in terms of dog behavior.

That story reminds me of a zany interaction that I had with this group soon after my neck surgery. About two weeks post-surgery, I was out for my daily walk but I wanted to avoid the pack. I was afraid that a dog might knock me over or that a fight might erupt, and I'd be unable to even try to help K. I heard the pack coming from a distance but I had just turned onto a side trail that they never use. So, I thought that K and I had veered off their radar.

I was wrong. The dogs chased us down, encircling me and a cowering K as they barked like crazy. These dogs have never physically hurt my dogs but they are scary en masse. Then, to my surprise, the human turned onto the side trail following her dogs to me. She ran hard, shouting between loud breaths that she was SO glad to see me.

Once she arrived, she said that she'd been carrying tiny scissors in her pocket for days, hoping to see me on the trails. I was mystified. Tiny scissors - were they a gift? Or, something to help with my neck? But, as I tried to figure out the mystery, I also tried to monitor the dog pack and K - which takes about 99% of my concentration. I always fear that K will somehow provoke an attack and the whole pack will pile on. It's never happened but it always feels like it might happen.

Then, my friendly neighbor explained herself. She had stitches in her back and didn't want to drive to town to get them removed. She thought that I'd be the perfect person to remove them. I was the 'chosen' one because I don't get squeamish about things like stitches.

So, she wanted me to take out her stitches at that instant, in the middle of the trail, with eight dogs having tense interactions all around us. And, to top it off, she wanted me to try to do it while wearing my rigid neck brace that made it impossible for me to bend and look at her back. Oh, and I forgot, it was 15°F - and she planned to expose her back for long enough for me to take out her stitches. I was flummoxed - really and truly floored by this unprecedented request.

Now, this story might help you to understand why I refer to us mountain residents as "crazy". I think that we all become zanier with each passing year spent living in the midst of the forest. I didn't remove her stitches that day... to my mind, it was simply impossible under the circumstances. But, since my neighbor thought that it was a perfectly normal request, I keep wondering how crazy *I* have become over the past decade!

Hmm, as I think about it, stumbling upon hibernating bears and then voluntarily returning to the den while wearing a rigid plastic neck collar soon after major surgery qualifies me as mountain-crazy! And, setting up a wildlife camera next to a deer that was just killed by a mountain lion definitely puts me in the mountain-crazy category.

To try to stave off the mountain-craziness, K and I started today with what I hoped would be a short sunrise hike but I could barely see the sun through storm clouds enveloping our world. 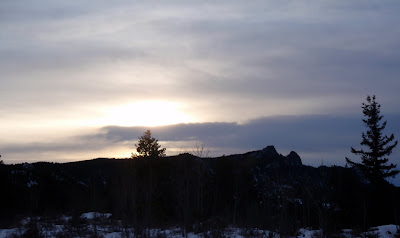 The skies did turn light gray, and K loved frolicking in the snow. 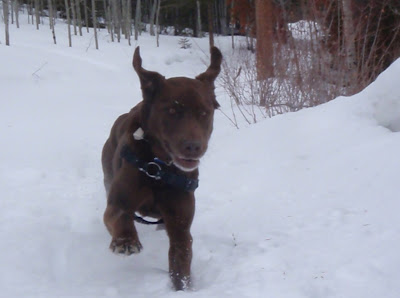 But, by afternoon, blizzard-like weather hit us like a sledge-hammer. Believe it or not, that's K in the middle of the photo - although she looks more like a black bear than like a chocolate labrador! 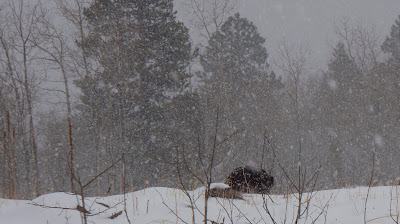 With it snowing like crazy on top of the fresh 10" of powder that we already have, we may be tromping the forest on snow shoes tomorrow. Now, that's mountain-crazy - a woman in a rigid plastic neck brace snowshoeing through a foot of snow! But, no one will even blink an eye - it's normal behavior for a crazy mountain person! 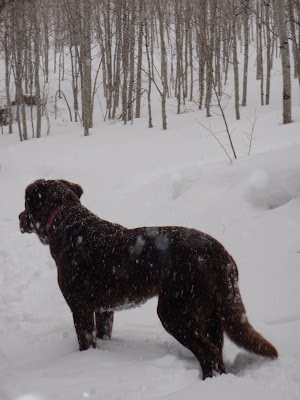