I had my first physical therapy session today since my three-level cervical fusion a month ago. I'm tired almost beyond words. But, those of you who know my blog are fully aware that I'll probably end up writing quite a few words!

K and I climbed up to Hug Hill this morning, with my frisky chocolate friend leading the way. 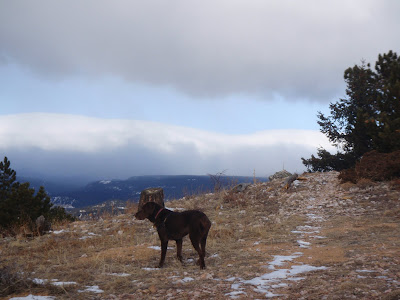 Then, we followed a favorite trail, and we discovered that no one but Leo the Mountain Lion had walked on it anytime recently. The trail was a clean slate of snow that recorded his every step. The tracks had melted and frozen at least once so I knew that he wasn't just ahead of us on the trail. 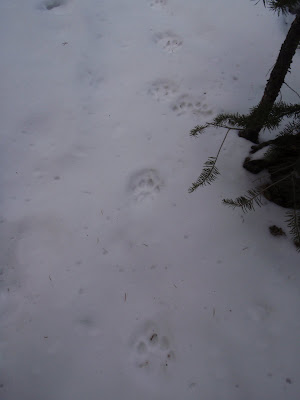 I was slightly frustrated to see these tracks. I've been trying to get a wildlife camera on this trail but technical difficulties have slowed me. So, I missed a lion photo. Oh well - he might come through again a few times this year. If he's the big male that I believe that he is, he may patrol a humongous territory, encompassing as much as 150 square miles. That's why he passes through our trail network only sporadically. However, female lions and subadult lions definitely use smaller pieces of his territory while sneakily avoiding a confrontation with the big boss - so one of them may pass through in the meantime.

In yesterday's post, all of the lion track patterns that I showed indicated that the lion walked slowly and carefully, precisely placing his hind paw in the track of his front paw. Today's tracks were different. He hurried at times, taking long walking strides that caused his hind paw to overstep his front paw track. It led to the pattern shown below, with two left paw prints followed by two right paw prints, etc. 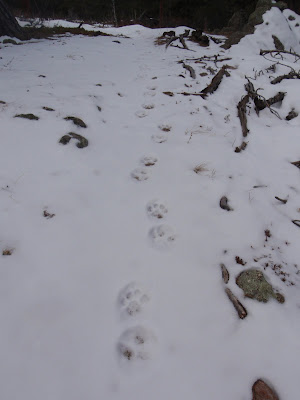 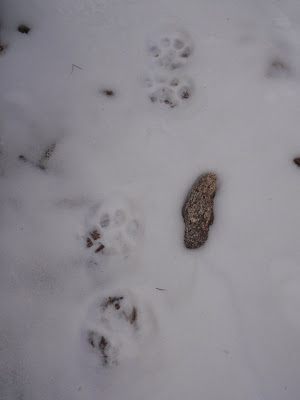 For me, seeing the tracks of this huge predator feels mystical. Today, I put my fingers in the tracks to feel the impression that his paw pads had left in the snow. I'm amazed and thrilled that these wild creatures live, almost unseen, in our forests. It feels like their powerful spirits infuse our land with wildness.

After my walking and my other rehab exercise, I headed into town to see my physical therapist. She concurs with my doctors that I'm moving through the healing stages very fast. But, I keep asking everyone why I'm so tired, why my brain seems foggy, why I keep forgetting things, and why my mood can plummet so easily. Basically, I feel like I'm running on fumes every single day.

Apparently, after such a major surgery, having some cognitive problems for months is not uncommon. After all, I was knocked out for close to five hours, I'm still taking novel medicines, and my body is working overtime healing. Somehow, I have trouble visualizing *why* healing takes so much energy. However, I can attest to how much it saps my spirit and brain power.

I think that my sweet K is big part of why I'm healing so fast. What a partner in surgery recovery she's been for me! She's always by my side, watching, loving, playing, and snuggling. Her eyes seemed to twinkle with love as she peered into my soul during our hike today. 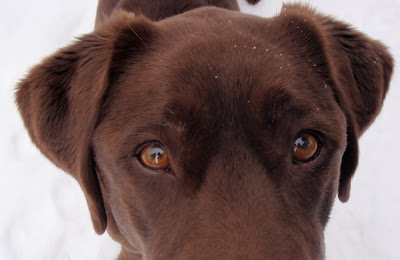 And, R has given us both the gift of laughter. What a big-hearted dog he is! 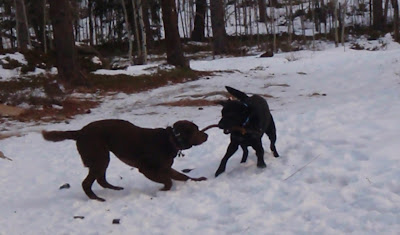 And, most days, nature has brought me peace and excitement. Take today - I saw mountain lion tracks early this morning and a soul-soothing sunset this evening while walking with my wonderful family/pack. 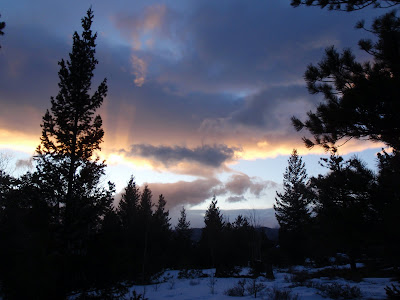 I have to conclude that I'm pretty lucky.
Posted by KB at 7:30 PM