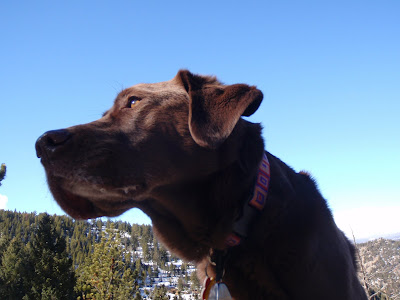 For the past two days, K and I have explored a canyon that we very rarely visit. From my house, we can climb upward toward our small peaks or we can plunge downward into a canyon. I'd been afraid to try to descend the steep and sometimes slippery route into the canyon since my surgery. However, the recent paucity of snow made the route almost easy today. Below, K gazed over the gulch that we were planning to follow downward toward the canyon bottom. 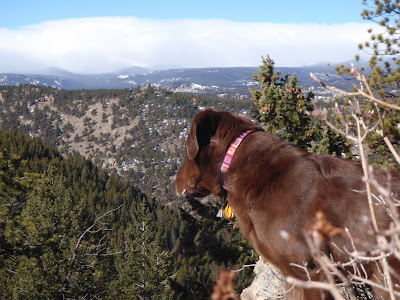 I love walking the remote trails on the canyon walls because wild animals regularly use these routes. In fact, I found bear tracks on one of these trails at Thanksgiving, my most recent visit to the canyon wall. Usually, by mid-winter, even touring skis don't traverse the snow depths with ease. But, for the moment, hiking boots can do the job.

Before we left the dirt to tromp through snow, we passed the spot where the mountain lion laid down for a while during a recent foray through our forest. It looked fairly freshly scratched out. K lay next to it for scale. I was thinking of putting a camera here. However, if a mountain lion uses it as an ambush spot, a camera will ruin his covert activities. That realization made me hesitate. 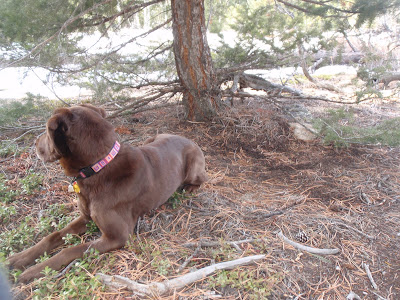 The cat ambush hide-out has a tremendous view of the mountains but I doubt that the feline can enjoy it as he stalks deer in the middle of the night. 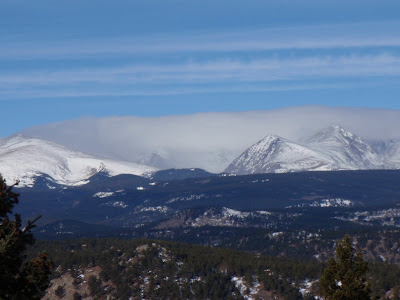 After looking investigating the cat hiding place, we descended a snowy trail with no other tracks on it. About halfway down, big round tracks, too old to identify, joined our trail from a snow-free slope next to the trail. We followed the animal's footsteps. 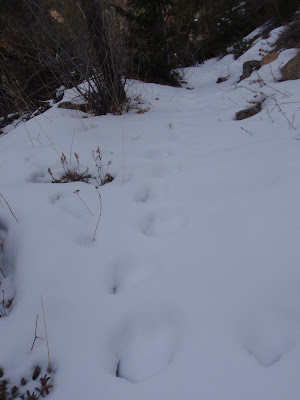 Then, when we hit the bench trail that contours along the canyon wall, the trail alternated between snow and dirt, depending on its sun exposure. We startedhiking on a dirt section. 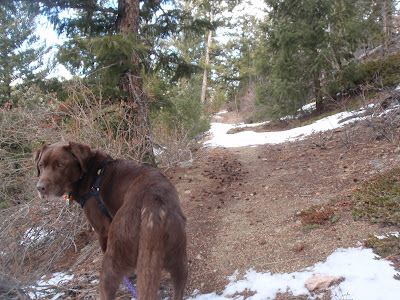 In the dirt areas, I found three different mountain lion scent posts. I couldn't ascertain how recently they'd been 'updated' but I knew what I was seeing. When a mountain lion leaves a 'scent post', he kicks back with his hind legs, and he doesn't always leave scat or urine on the pile of duff. Usually, only males leave scent posts. The scent posts tell other lions that this territory is occupied and they'd better move along. The only time that a female leaves scent messages is when she's in estrus. Then, she urinates on the male's scent posts to advertise her availability.

In the photo below, with K next to it for scale, the two scrape marks (a scent post) left by the lion's hind paws stood out even to the human eye. Snow filled them (they're in front of the tree). Obviously, the lion scraped the depressions prior to our last snow, a week ago. We found three different scrapings, separated by a third of a mile or so, along the bench trail. 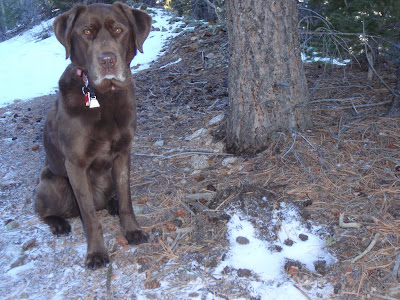 Just like dogs, mountain lions use their front paws when they're digging with a purpose rather than for scent marking. In the photo below, my wildlife camera caught a lion covering his deer carcass, using his front paws to launch snow and dirt over the carcass. 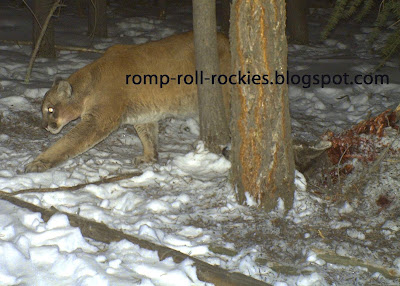 While building a towering pile of debris over the carcass, he paused to lick his paw. 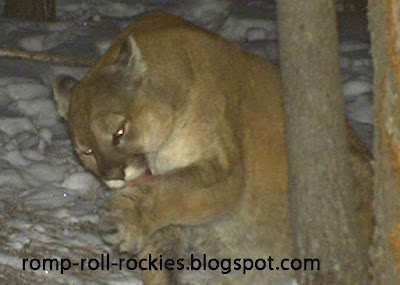 I'm still spending time every single day working on the unbelievable number of photos and video clips that we have of this lion. My goal is to make a video from all of them but, until I start working more efficiently (i.e., stop needing mind-altering meds for my post-surgical pain), I think that the progress will stay slow.

Today, as K and I crossed a gulch and the trail faced more northward, snow swamped it, and K frolicked. In a unique twist, she sported only one ear flopping in the air in this sprint! 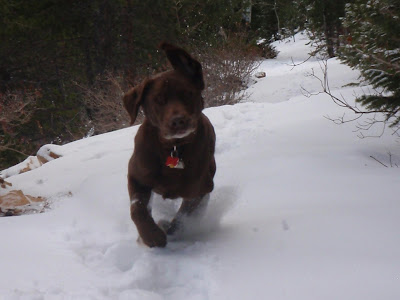 To my surprise, in the midst of this forested area with no meadows nearby, I found bobcat tracks. They marched along the trail atop the snow crust, diverging only to investigate rabbit tracks. 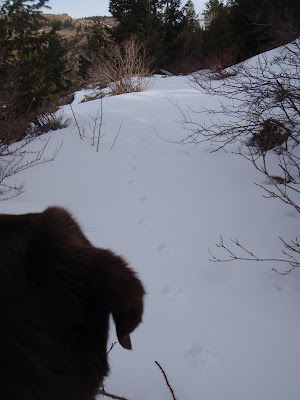 One of the tracks was perhaps the most perfect bobcat track example that I've ever found, with the double cusp at the top of the largest paw pad obvious. This feature appears only in felines. 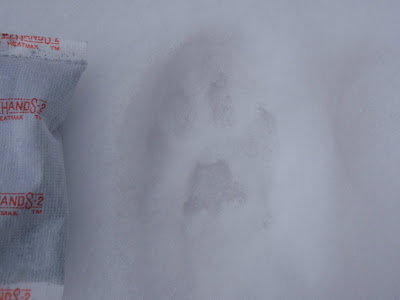 A little further along, huge round tracks descended from the slope above us. They were old but I suspected that a lion left them. If you look carefully at the photo below, the bobcat tracks, quite fresh, march along the far left of the trail. The huge melted out tracks of a larger animal tromp along the right of the trail. Where the two tracks met, the bobcat placed each paw in one of the packed tracks of the larger animal, saving energy by avoiding sinking into the snow. 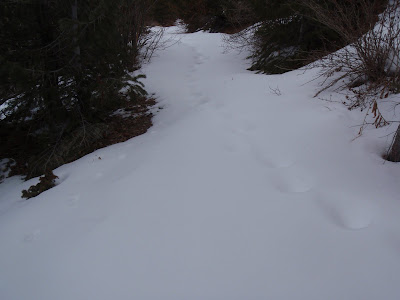 I'd been developing a picture of our woods, in which the bobcats and lions traveled divergent paths, thereby avoiding each other. After all, a lion will eat a bobcat if given the opportunity. I visualized the bobcats staying close to open meadows, hiding in boulder piles. Bobcats would rarely see lions in this habitat because lions normally eschew such open terrain. Today's hike blew my picture to pieces. I like that - there's so much more to learn!

Today, the bobcat marched along the bench trail, an obvious lion corridor. Indeed, the bobcat even left scent posts along it. Below this cliff-like boulder, K sniffed out a pile of bobcat scat in the dirt under an overhang. K pointed out yet another bobcat scent-post in a dirt section of trail. When I hike in the woods with my dogs, I pay attention to what they sniff - I've found many interesting animal signs that way. 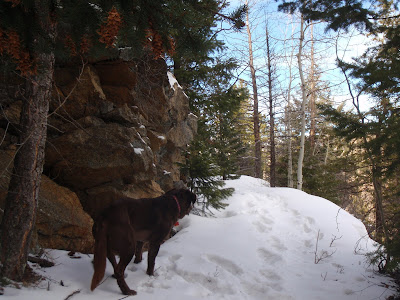 Finally, because both K and I seemed to have more endurance than I would have ever predicted so soon after our respective surgeries, we plunged the last 500' down to the creek. I thought that we'd see tons of animal tracks, meandering down for a drink. But, we didn't. We saw a few deer and coyote prints among the willows but no other tracks. 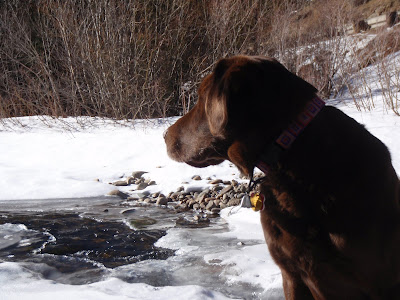 Despite being a water-loving dog, K knew that she didn't want to plunge into this freezing water. She delicately hopped from rock to rock. Although the sun arcs higher in the sky each day, K's shadow still loomed large on the snow covering the icy creek. 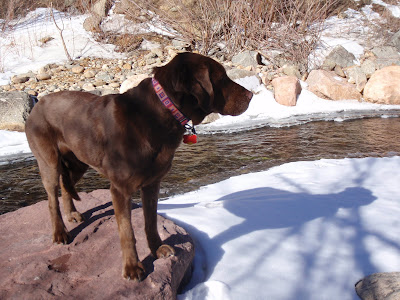 After the creek visit, it was time to climb home. We trudged straight up the canyon wall, walking companionably side-by-side. Having K with me makes these adventures immeasurably more fun!
Posted by KB at 6:10 PM