My driving powers were called into action again today. K needed to go to the vet for a burgeoning eye infection. So, I hopped in the car and took her. It felt nice to be capable of such a simple act.

Because we had an early appointment, K and I took a very short hike early this morning into our meadow, setting up a wildlife camera at "bobcat rock". It looks like the coyotes might be trying to steal this scent post from the cats, based on a scat war, with each covering the other's scent with their own scat. The videos should be interesting!

While I set up the camera, a novel bird song rang like music to my ears. I know all the winter bird songs, and this melody was belted out by a visiting bird, perhaps an early migrator. Intriguingly, I have an almost identical photograph from last fall. Both times, the bird perched too high for a close-up so I couldn't identify the species. But, I'll take it as my first sign of spring! 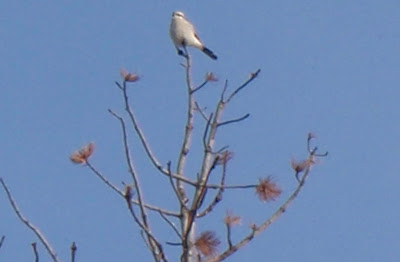 After our brief walk, my mood plummeted as I drove K to the vet. I started having intense nerve pain down my leg yesterday evening, after I'd driven for the first time in a month. It's not a new pain but one that darkened almost every waking hour before my neck surgery. At that time, a low back MRI showed a huge disc herniation adjacent to the lumbar spine section that was fused a few years ago. That lumbar herniation could easily have caused the leg pain. But, docs and PTs mentioned that the neck surgery might also help my leg pain because my neck discs and bone spurs were squashing spinal cord badly enough to carry pain all the way to my toes. I fervently hoped that they were right.

After my neck surgery, I thought that my dream had been granted. The leg pain was so much better - it didn't vanish - but it shrunk to a livable level. Well, based on the leg pain I've had for the past two days, I'm beginning to think that living a cloistered life and never driving was the solution to my leg pain, not the neck surgery. Only time will tell. However, my brain is vibrating with echos of the words of my docs and PTs who encouraged me to get a low back fusion 6 weeks after my neck fusion. All that I can say is, "Please, let me have a spring and summer break from surgery!".

So, with trepidation due to the pain, K and I set out on another novel hike from a trailhead on our route home from the vet. Regardless of my leg pain, my rehabilitation plan for neck fusion requires a lot of walking/hiking. I chose a trail that climbs up a gulch through stunning rock formations that jut into the sky like monuments. 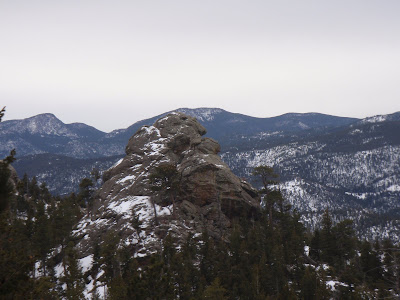 When viewed from a distance, like the photo above, it looks like smooth hiking. However, close-up, it actually is a labyrinth of downed trees and truck-sized boulders, especially for a curious hiker like me who cannot restrain herself from 'exploring' off-trail. 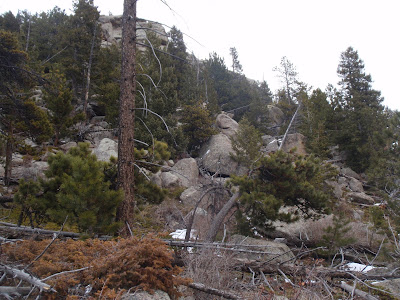 K investigated every nook and cranny as I hiked slowly through the rough terrain. 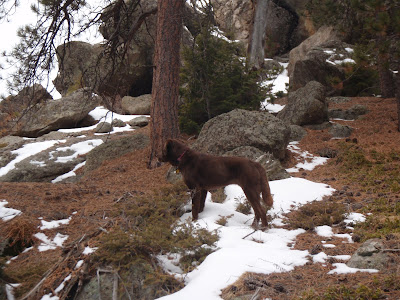 Due to her intense body language, I started following K to see what she sniffed. I soon concluded she was examining mountain lion signs that littered the landscape. They weren't super obvious signs - no fresh tracks or scat - but many scrapings so large that only a mountain lion could have dug them. Below, she sniffed a recently created pile of pine needle duff that smelled of cat urine. Even I could smell it! 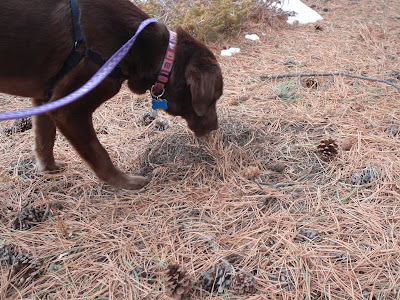 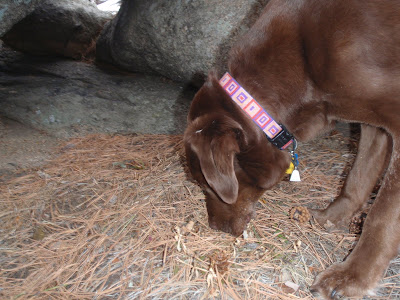 Behind that mountain lion scent post, the boulder face had a gaping hole, leading into a cavern. Neither of us cared to explore the cavern. 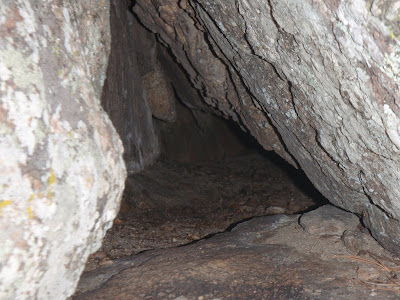 Soon after leaving the cavern safely behind, we wound around a boulder and emerged onto an exposed slope. I don't like high exposed spots, and my heart rate skyrocketed. I snapped a photo of K and then leashed her. She's so sure-footed and cautious that she'd probably be fine without the leash. But, I couldn't handle it. 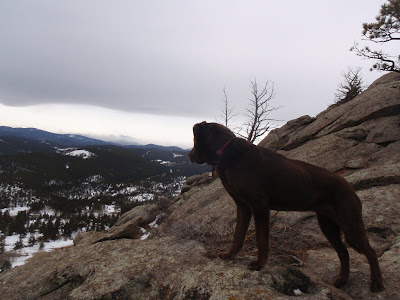 A harder look at the horizon, while staying away from the cliff edge, showed a local ski area but all the higher mountains hidden by clouds. 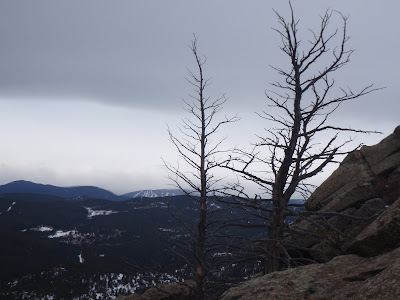 As I surveyed the surrounding land, I realized that we stood almost on the tip-top of a pinnacle with views in nearly all directions. The smaller hills to the east ruffle the landscape behind K in the photo below. 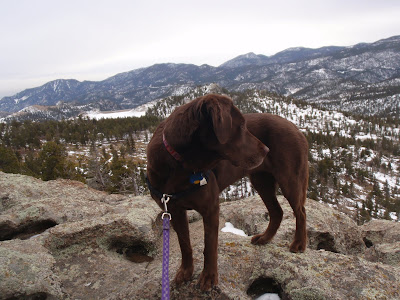 With just a little more physical effort, trudging straight up a forested trail, we spotted a favorite mountain from a different perspective than ever before. 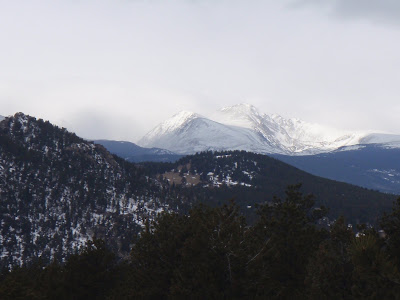 And, behind aspens with swelling buds that promised spring was almost here (ha!), I spotted the ski area again, looking like it sat lower than us. 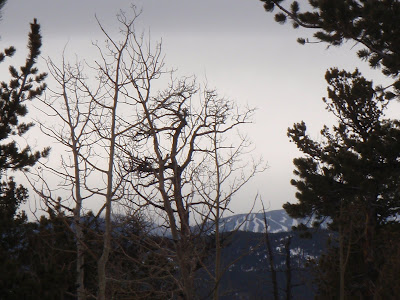 It's amazing how 'exploring' nature makes me forget my worries. And, it's wonderful to be hiking in a wider range of terrain again. However, I think that I'll curb my driving for a few days to see if it helps my leg pain.

Some readers have asked for an update on R's barbed wire injury. I think that he's healing fine, and he doesn't seem to mind his cone-head. In fact, the acoustic properties of the cone have encouraged a new talent - howling. Yesterday, he turned his nose skyward and launched into full-blown howling, like a wolf or a Sibe. In fact, I'm starting to wonder about whether the Sibes in our blogging life are having too much influence on him.

He wasn't howling when I briefly 'lost' him inside the house this afternoon. I couldn't find him anywhere, and he ignored my calls. Then, I noticed the 'surgery recovery chair' twisted to a strange angle. 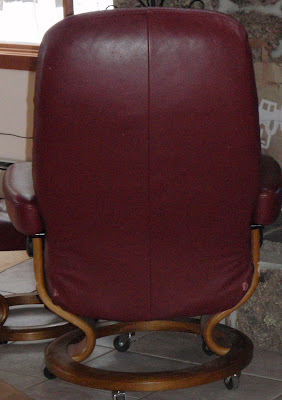 I sneaked up behind it and spun it around. Voila! Note the smug look on the boy's face! 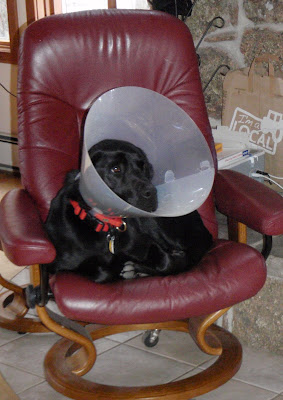 R is medicine for my soul. He makes me laugh daily! But, giggling while reprimanding him doesn't make me very convincing!
Posted by KB at 4:50 PM