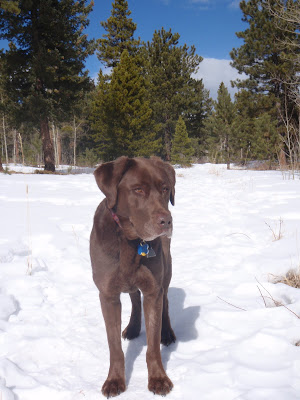 K and I bounced out the door this morning, looking forward to our "rehabilitation" walk. I'm supposed to be walking many miles a day to help my neck heal - but it isn't a chore most days. It's a joy!

On the trails today, we ran into our local dog pack and their human almost right away. The pack has a new leader who has changed the dynamic of the pack. He's a young but big German Shepherd, who seems playful and friendly to other dogs. After he kept gently taking K's entire head into his jaws to entice her to play, she decided to do a snow wriggle in front of him. I took a whole series of photos, and the GSD repeatedly raised a paw while K wriggled. A paw raise is thought to be a calming signal in a hypothesis generated by Turid Rugaas. Indeed, it looked like a message that the GSD meant no harm and that K should relax and play with him. 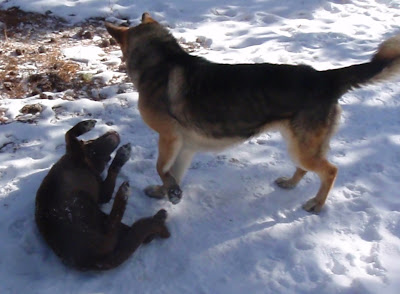 The two didn't ever fully engage in play but I suspect that they will in the future. To me, the most fascinating part is the transformation in his entire dog pack since this new alpha dog arrived. They don't swarm K as annoyingly anymore. And, the former lead dog doesn't make K cower behind me. It's been eye-opening to see how much one new dog in a big pack of 7-8 dogs can change the pack's behavior.

Shortly after meeting them, I thought that K needed a fun game so we did a "hide and recall" session, where I left K in a sit-stay, walked about 150 yards, and hid in the midst of small pine trees. I hid so that the prevailing wind wouldn't take my scent to the trail that K would doubtless use to search for me. Notice how calmly she handles not finding me immediately. If R doesn't find me immediately, he starts running back and forth frantically. R wasn't with us this morning.

Soon thereafter, we tromped through the wind-packed snow of a meadow, and K wriggled happily. 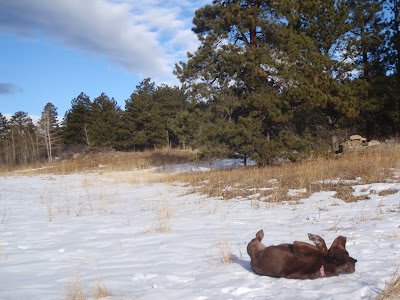 Then, we renounced the established trails and started exploring. We headed down the same gulch as we followed on the day that we found the bear den. However, today, we descended all the way to an established trail to make sure that we didn't accidentally stumble upon their den again. I watched for bear tracks because I was interested to find out if we'd awakened the family so much that they'd gone for a stroll on the trail. However, we saw none - a very good sign.

As we contoured along the canyon wall, we passed many cliff-like formations above us. No fresh tracks marred the snowy trail. I don't think that any humans or domestic dogs except me and K have walked this trail since late fall. 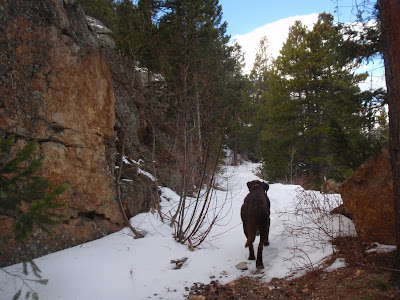 Next to one of the cliffs, mountain lion tracks stomped down the hillside. In the photo below, the uphill side is to the right and the lion had walked down onto the trail sometime within the previous 36 hours. I know that it was within that time frame because his tracks had been made after our most recent snow. 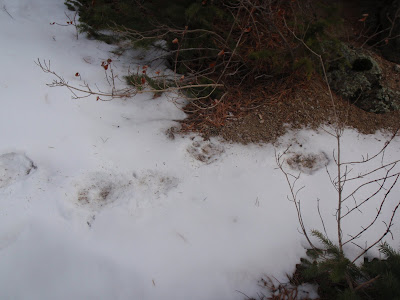 None of the tracks were perfect specimens due to the crust below the new snow. In the photo below, my chemical handwarmer is 3.5" long, and the track is at least that long and wide. 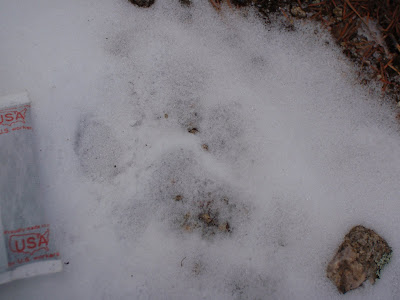 On the other side of the slope, the lion tracks came in close proximity to deer tracks. However, I doubt that both animals moved through this spot at the same time because I saw no evidence of a chase by the lion. The deer did move at high speed with huge strides. One landing of all four hooves shows up on the left of the photo. The lion tracks move from the bottom to the top of the the photo on the right but never showed signs of acceleration. 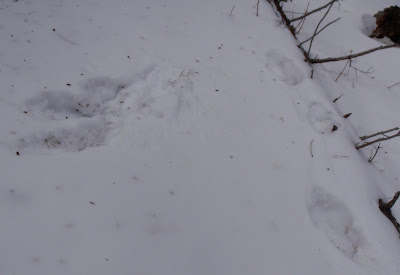 The lion must not have been too interested - either the deer hadn't come through yet or the deer was already far away. The lion soon turned around and headed back upslope into the rocky wall behind K. Although she kept one eye on the wall at all times, she didn't seem overly anxious, suggesting that the lion wasn't nearby. 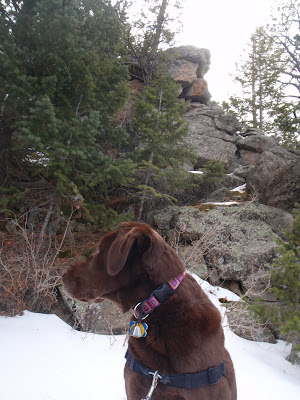 While we stood by the tracks, I checked the distance to the hibernating bear den. It was less than a quarter mile. Does anyone out there know whether mountain lions ever try to attack sleeping bears? I'm very curious.

In case you missed them, my posts of a sampling of mountain lion photos at a deer cache can be found here (part 1) and here (part 2). I've mentioned that I'm still working on putting together all 400 photos and video clips. So far, I've completed editing and collating the material from the lion's first day at the deer carcass. It's a huge job!

Near the end of our hike, K stood tall on a rock, with deep blue sky behind her. She loves finding rocky lookouts to survey her kingdom... or perhaps I should say the lion's kingdom 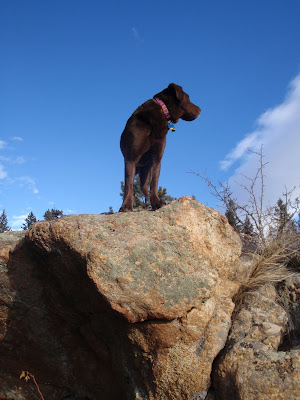