A fresh and sparkling white layer covered the forest this morning, under a stunning blue sky early in the morning. 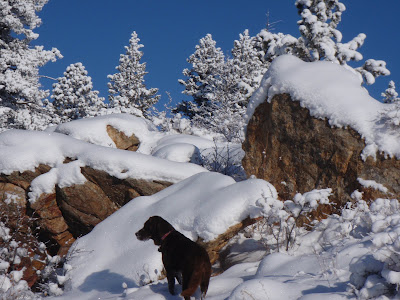 Snow blanketed the boulders that K used as her one of her 'look-out' points this morning. 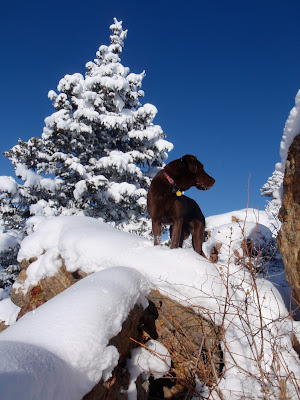 She gazed across a meadow, silhouetted against the endless azure sky. 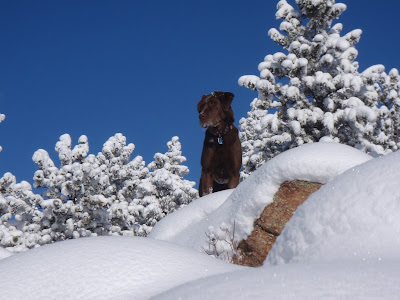 The clouds started to roll in about a half hour into our hike but the snow still sparkled. 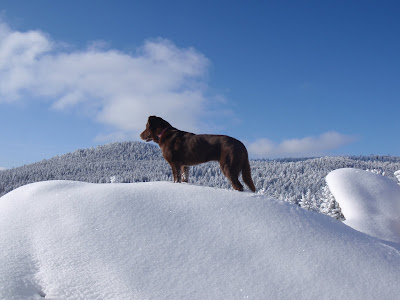 I slipped and tromped my way up to Hug Hill, anticipating a spectacular view. At times, the snow almost covered K completely! 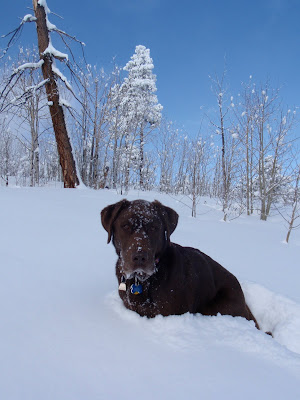 Even her head submerged in the snow at one point, and she looked hysterically snowy when she emerged above the snow. 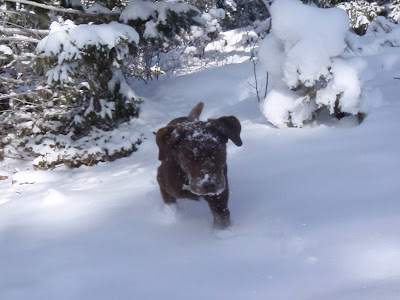 Despite the 5°F temperature, I sweated and roasted as we laboriously climbed. When we reached the apogee of the hill, misty clouds veiled the snowy mountains. It was beautiful in a surreal way rather than the crystal clear way that I expected. 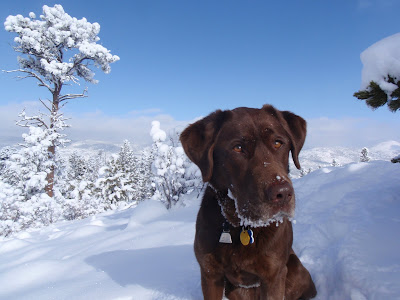 After we enjoyed a few cold moments on the hill with my sweat freezing on my skin, we practically rolled down the hill all the way home, a happy girl and her dog who'd had a gorgeous day in the mountains.

On another vein, over the past several days, I've spent extra training time with both dogs. With K, I've worked on scent discrimination where she has to choose a certain plastic bottle that contains a particular scent. Eventually, I'll post some details of that training.

With R, I've worked on more basic training where he picks up an object and brings it to my hands. I use positive training techniques, where R earns treats for doing the correct thing (or some facsimile, depending on how far along we are in training a given behavior). His only 'punishment' for making an incorrect choice is that he doesn't get treats. As you watch the video, notice that I never say anything negative, threaten him, or intimidate him. Rather, I try to always be encouraging of good behavior and ignore bad behavior.

People often use 'clickers' for this type of training, where the person clicks at the instant of a correct behavior and then gives a treat. With R, I haven't ever used a clicker. Instead, I use a verbal 'yes' at the instant of a correct new behavior. As I watched the video, I realized that I'm not good at this technique. I end up using too many words and not enough 'yes' exclamations.

Here's a synopsis of 3 days of training. It progressed far faster than I ever dreamed, mainly because R is not afraid to make mistakes. He 'goes for it', trying a new strategy whenever a previous one doesn't earn him treats. His demeanor is perfect for this type of training.

I realize that it's a long video but it shows both the ups and downs of the three days of training. It also shows R bouncing back after being terribly afraid of one of the objects that I asked him to pick up. So, if you have time, you might enjoy seeing the training in action.
Posted by KB at 9:20 PM