Mellow hike with the elk herd

I 'took it easy' today, although I'll openly admit that resting isn't a talent of mine. K and I started a walk when the sun still hovered low in the sky. She led me up a snowy hill, with the golden sun highlighting her chocolate fur. 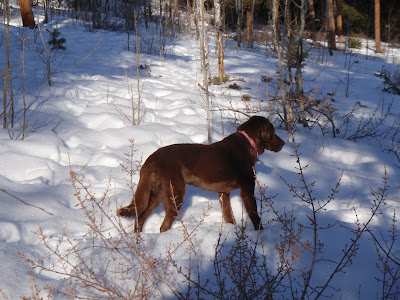 Almost immediately, however, I had to call her back. She vibrated with high intensity energy over something that I couldn't see or smell. As you can see from the photo below, she feels great, enthusiastically sprinting to me, despite a minor eye infection. R is also feeling great, and exercised during the 'boys only' outing this morning. 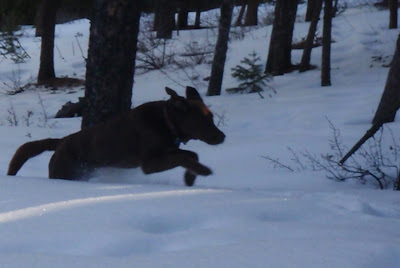 After I called K, I leashed her and noticed the brilliant sun peeking onto this north-facing slope. I don't think that I've seen the sun from this slope since last fall! 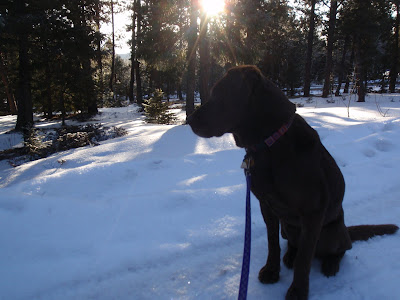 I asked her to 'show me' what was so exciting uphill of us. She led me straight to a snowpile that looked boring. But, then, she started digging, uncovering mountain lion scat and urine. The stench immediately almost gagged me after K dug it up. I think that it was an old scent post, preserved by snow. No fresh tracks marked the new snow around it so it wasn't brand new. 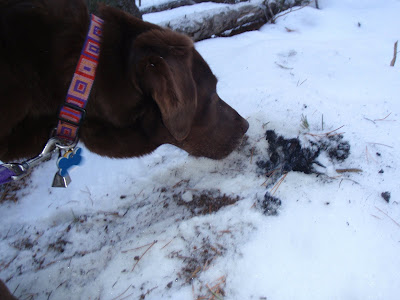 So, as usual, K and I were wandering, well off the course that I'd planned for us. No problem - we just kept exploring. We found a live but thin pine tree with half of its trunk denuded of bark and parts bitten roughly. When I looked closely, long black hairs stuck to the tree. I'm guessing that the bears debarked this tree last summer based on the fur. 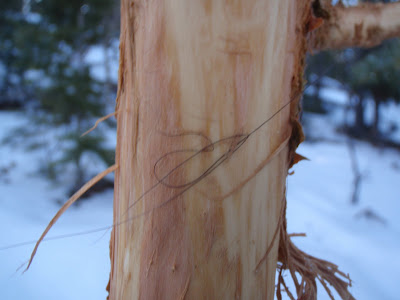 I wonder if this jet black bear left the fur. Our wildlife camera captured this photo last summer. 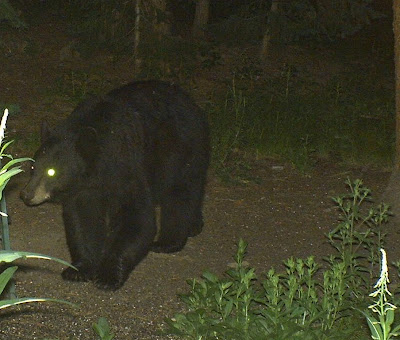 As we hiked on, we reached a ridge, and followed its rocks around the rim of a meadow. K stared down into the meadow. Notice the dots on the meadow floor - the elk herd! 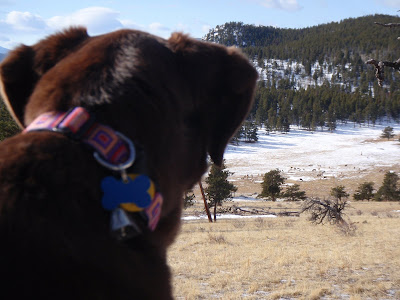 Zooming in on the animals showed that they definitely were elk but didn't show the whole sprawling herd that must have numbered a hundred or more. 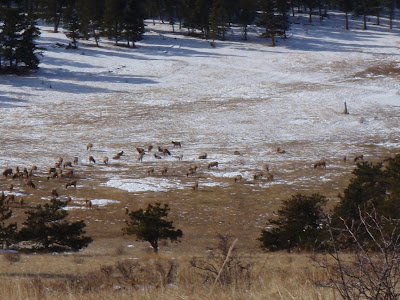 We continued to pick our way along the ridge, trying not to alarm the elk. They seemed to realize that we were above them but didn't act worried. K was entranced by the herd but remained silent. 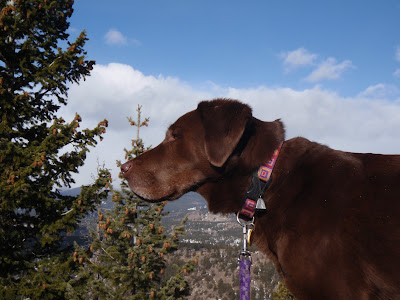 Eventually, we had no choice but to plunge down the other side of the ridge to avoid creating a thundering herd of fleeing elk. We tried this route last week and ended up in waist-deep snow. I think that I chose the absolute worst route last week. So, today, I carefully searched for some animal tracks, with the notion that the forest-savvy animals would use the easiest routes. The only tracks that I could find looked like they were left by a large animal who'd passed through a while ago. 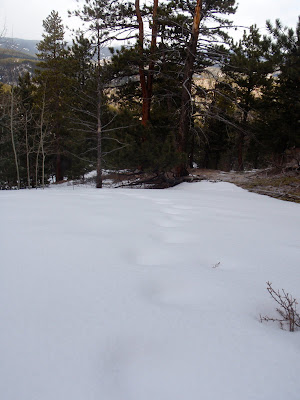 Our animal guide led us down the slope by a super relaxed route, with only a few areas of snow deeper than 6" or other obstacles. Before I knew it, we intersected the trail I'd been aiming for. 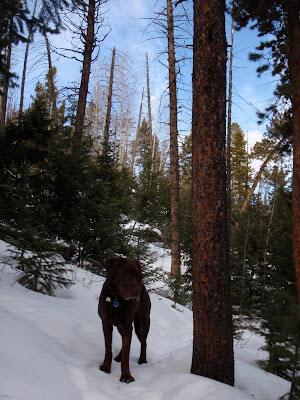 It was yet another hike where K and I didn't even vaguely follow my initial plan. First, we followed her nose, and then I improvised from that point. As I hiked, I pondered whether K is becoming a 'lion hound' based on how many of their signs she's been finding. Upon thinking about it, however, I concluded that she'd probably been showing me these signs for years but I was clueless. Now, I recognize what she shows me.

After my 'easy' day, I'm in less pain than last night but still not back to where I was before driving. I realized a potential reason why driving caused my low back and leg so much pain. Because I can't turn my head very far, I was twisting my lower back whenever I needed to look left and right. Twisting is extraordinarily hard on discs so it probably aggravated my herniated lumbar disc. In any case, at least I understand *why* driving set off such pain. Now, I just have to figure out how to deal with it!
Posted by KB at 8:20 PM