The path of a bobcat

Today's morning hike started when the sky was dusky black, with only a faint glow of the day to come. Another light but deep layer of snow had fallen over night, and some flakes still fluttered through the dawn air. 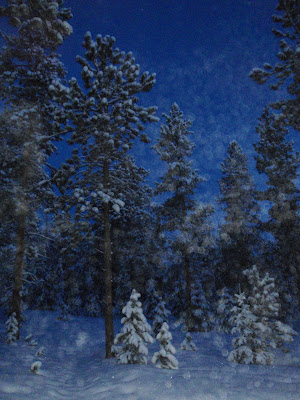 K and I headed for the meadow, following a pack of coyote tracks. They peeled off before we stepped out into the heart of the meadow. The vast expanse of the meadow sparkled with fresh snow, a clean palette for finding animal tracks. As I scanned, I saw a set of bobcat tracks join my trail ahead of us. 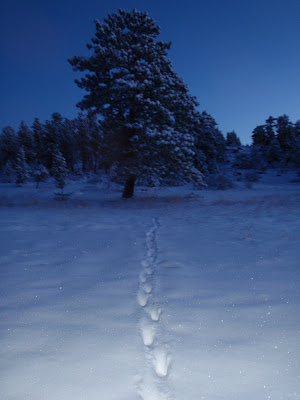 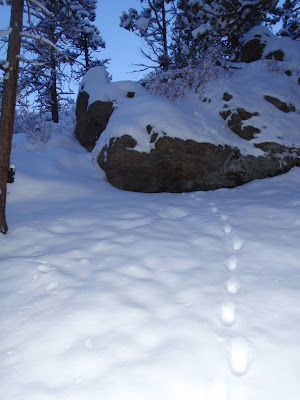 According to the tracks, the bobcat had visited the scent post, a pile of scrapings and scat that sits under the protective roof of the boulder. Then, he'd backed up and leaped about 3-4 feet vertically onto the boulder. 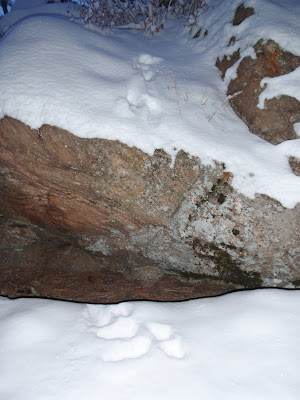 To my utter dismay, I discovered that the bobcat's arrival didn't trigger my camera. It was set to record video using infrared light. If it had worked like it has on many occasions in exactly this spot, the video of this bobcat would have been fun to watch. I was disappointed.

We skirted the boulder and kept following the tracks. The cat marched up an open and snowy slope, and then entered a sparsely forested plateau. He carefully walked under the protection of trees where the snow wasn't deep. When I strayed from his route, I once found myself in snow up to my thighs. His strategy was smart. In the photo, the bobcat's tracks marched ahead of K who sat waiting for me. 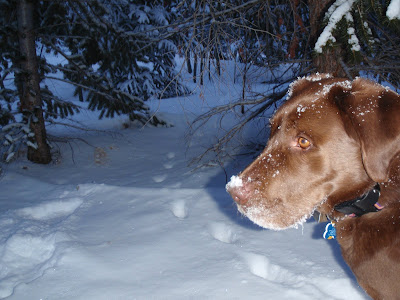 As we crossed the lightly forested area, the sun just below the eastern horizon stained the sky orange and purple. 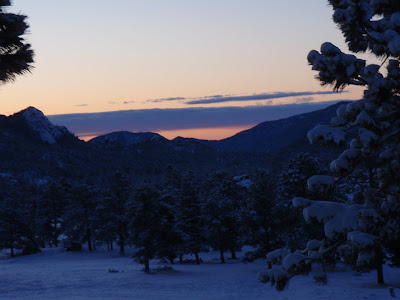 To the west, the clouds hovering over the Divide glowed pink behind my chocolate furry companion. 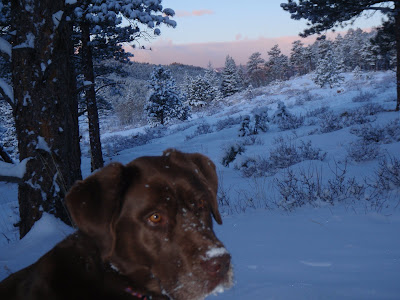 As the bobcat patrolled his territory, he stopped to check almost every boulder outcropping. Usually, he skirted the edge, checking under rocks. I'm guessing he was sniffing scent posts (we found several) and searching for rodents or rabbits. 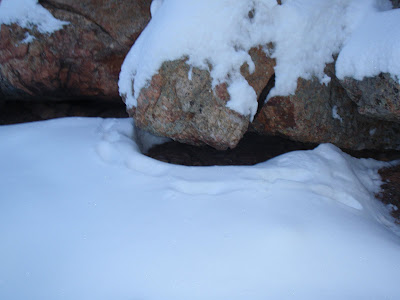 The nimble bobcat chose some death-defying routes. At this spot, he climbed up a nearly vertical rock face and then slipped through a slot in the boulders. 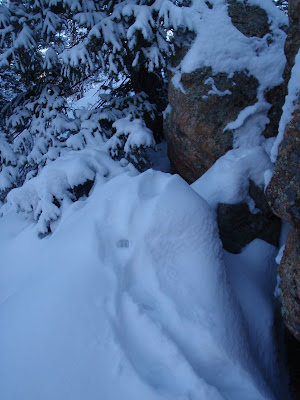 We went the long way around the boulders and discovered his motivation for sneaking through this outcropping. A veritable rabbit party had occurred, based on the scattered lagomorph tracks on the other side of the wall of boulders. 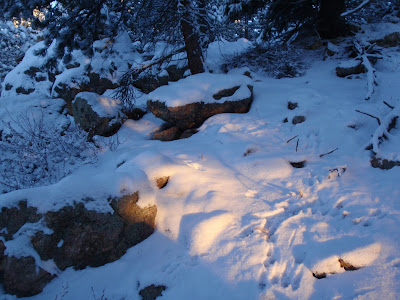 Based on the furious chase tracks, I suspect that the bobcat caught his dinner here. His purposeful tracks leaving the area made a straight line toward a very isolated locale - a perfect place for him to hunker down and eat. Alas, I was out of time because I had to get to a doctor's appointment. So, I abandoned his tracks and headed toward home. I hope to return tomorrow to see if I can find evidence that the bobcat did indeed hunt down a rabbit dinner last night.

As we emerged from the dense forest where we'd abandoned the bobcat tracks, the low sunlight filtered golden onto the snow. 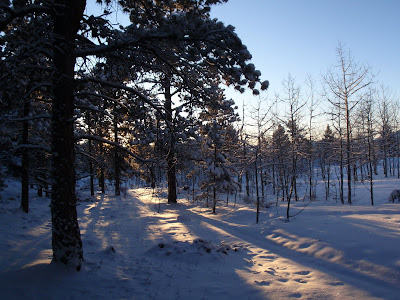 As we tromped toward home on the trails, we intersected the beginning of our bobcat's nocturnal odyssey. Because the tracks were filled in with an inch of snow, we knew that they were left earlier in the evening than the tracks we'd just abandoned. Indeed, it was K who alerted me that we'd crossed our cat's path again. She found the tracks and sat while staring at me to catch my attention. 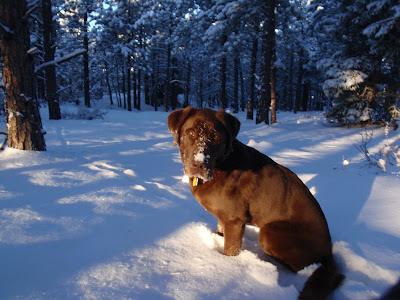 She's turning into a good tracking dog. She never takes off chasing or following the tracks without me. She simply 'tells' me that there's something to pay attention to.

She showed me that the tracks had wound through a boulder pile as the bobcat ascended from an isolated canyon where he might have spent yesterday napping. 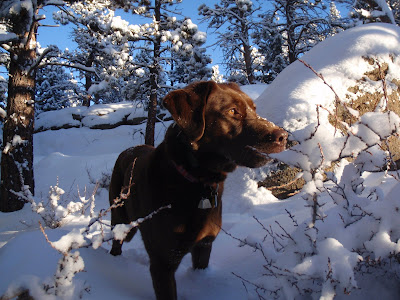 Alas, after perusing this new discovery, I was truly on the verge of being late for my surgeon's appointment so we headed east, straight into the risen sun, toward home. I truly wished that I'd had time to follow the tracks to both ends. It's so much fun getting a peek into the real life of a bobcat. 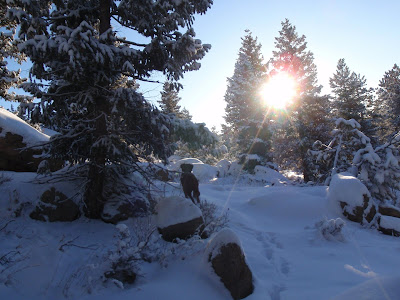 I've had PT and surgeon's appointments in the past two days. Both of them assured me that the new pains and incredible fatigue that have floored me recently are completely normal. My PT massaged my three-day headache away, a miracle as far as I was concerned. Interestingly, she asked me to look straight ahead and then to each side so that she could measure my neck's range of motion. My "straight-ahead" is about 15 degrees to the right of where it should be. The reason is that the muscles on the right side of my neck are spasming so hard that they're constantly pulling my head to the right. I wonder if that's why my hikes have all been big clockwise circles?

My surgeon buoyed my confidence in the bony fusions growing between my neck vertebrae. I'm on the right track, moving fast, but he emphasized that I'll continue to have pain and fatigue until at least 3 months post-surgery. He wants me to start using my neck more normally - without the support of any brace and without constantly tensing my muscles out of fear of hurting myself.

My final topic of conversation with the surgeon was a potential operation on my low back to fix the huge disc herniation adjacent to the series of previously fused vertebrae. It's an overwhelming proposition so soon after my major neck surgery - so I hope to put off lumbar surgery for as long as I can bear the pain.

Thanks to all of you for your support - it has made this recovery journey so much easier!
Posted by KB at 7:30 PM