Coyote dynamics and a dog hike in fresh snow

As soon as darkness falls, the clearing around our house becomes a beehive of activity. The coyotes congregate, the bobcat stealthily walks the perimeter staying in the trees to avoid the attention of the coyotes, all rodents hide to escape the attention of the carnivores, and we see the flashes of our wildlife camera lighting the area almost like a disco. In the summer, bears also join the party but, as we are well aware from a first-hand encounter, they're sleeping now (at least when silly hikers with neck braces don't wake them up accidentally!).

A couple of nights ago, a camera on the perimeter of our clearing caught a lone coyote walking toward the house. 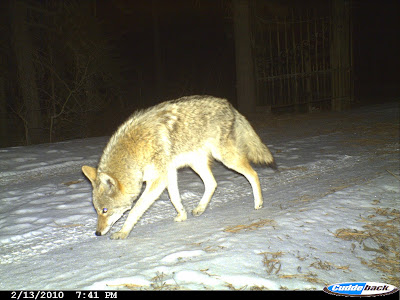 Then, a camera closer to the house captured the image of the solo coyote under our birdfeeder. This individual has a nick in his right ear that helps us recognize him/her. He seems to be loosely affiliated with the other coyotes in our locale but our wildlife camera recorded video of a pair of coyotes chasing him away on one occasion. The nick in his right ear is apparent in the photo below. 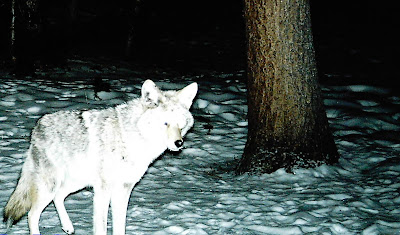 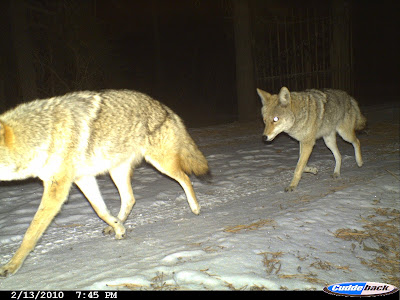 Soon, they joined Nick Ear under the birdfeeder. The wildlife camera near the birdfeeding station is one that I've been testing, and so far, I detest it. The photo quality is terrible (and they've been closed 'due to bad weather' every time I've tried to call recently). I won't name the brand until I give them a chance to help me improve the photo quality. But, despite the bad quality, it did document what happened that evening. Here, three coyotes milled about. 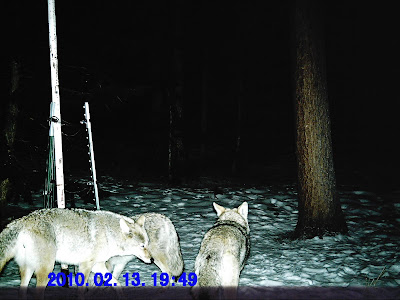 Soon thereafter, one of the bonded pair disappeared from view. The other of the pair began mounting Nick Ear. It continued for about 2 minutes, and then all coyotes vanished from camera view. Nick Ear seemed to submit to it without any signs of struggle. I suspect that the mounting was a dominance display rather than actual mating. Coyotes, like dogs, become tied together for about 20 minutes after actual mating. These two only remained together for 2 minutes or so - making it unlikely that we photographed real mating. 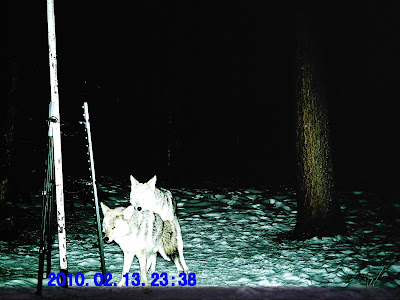 After observing this coyote trio for about 6 months, my guess is that they constitute a small pack. The top female and male always travel together and will likely produce a litter this spring. In fact, the coyote gestation period is 9 weeks so they're probably in the midst of mating season.

Nick Ear may be one of their offspring from last year or an unrelated younger coyote who co-inhabits their territory. Based on the research I've done, Nick Ear will likely be the target of many dominance displays in the near future to make sure that (s)he doesn't mate or interfere with reproductive activities of the bonded pair. In all likelihood, Nick Ear will later help raise their pups.

Interestingly, on the very same night but much later, a bobcat walked the perimeter of our house, literally within 2 feet of the stone footer that encircles the house, avoiding all cameras. I know his actions from his tracks, which were left after a midnight snow squall.

Like I said, our clearing becomes a beehive of activity after darkness falls! But, we also know that all of the animals flee if we go outside after dark. They coexist peacefully with us.

Early on the morning after all the activity, I caught a ride to a local trailhead with the boys, who were heading out for a long run. I still haven't resumed driving since my surgery, a source of frustration for me. But, on that morning, I forgot my impatience with this surgery recovery period as K and I explored virgin powder on a novel trail. The early morning dawned dim with no blue sky behind a grove of gnarled aspen skeletons that we tromped through near the start of our hike. 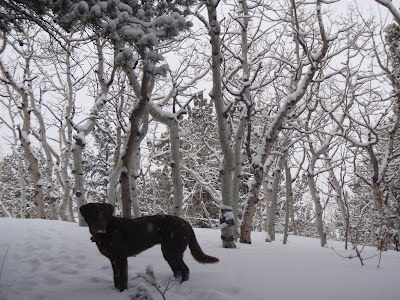 When we reached a round-shouldered hilltop, the nuclear reactor in the sky tried to burn through the low gray ceiling and almost succeeded. 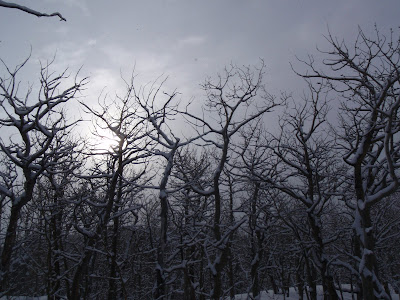 We walked where no one else had tread, aside from a rabbit or two, since the overnight snow. 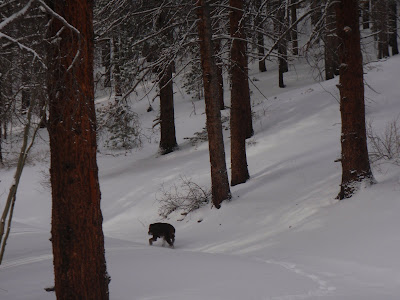 K alternated between serving as the forerunner, checking out the terrain ahead of us, and walking by my side. When we turned around, I enjoyed seeing our parallel tracks in the snow with mine on the right and K's on the left. They symbolized our partnership to me. 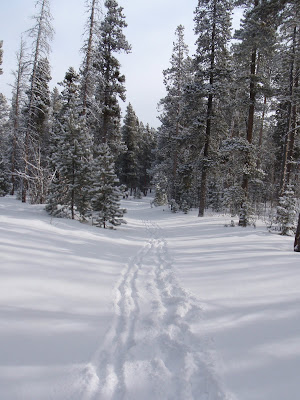 Usually, I avoid out and back hikes if possible because I see the same terrain twice. However, the sun had transformed the day during our hike making it feel like a different trail on the return trip.

The aspen grove now stood, hopefully awaiting spring, against an emerging blue sky. And, it was so cold that K had formed frost on all spots shaved for her surgery a month ago. Notice the white on her right forearm (IV spot) and her belly. Of course, the white beard formed because she ran hard in very cold air, causing her breath to freeze to her chin. 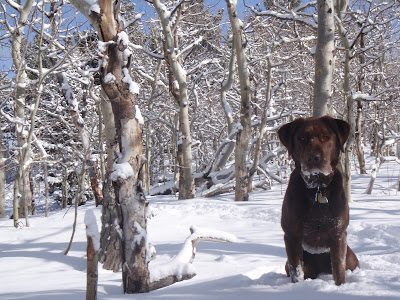 Then, the clouds lifted still further, and the local ski area hovered like an apparition in the distance. At one point this fall, I bemoaned the fact that I'm not allowed to ski anymore. On this morning, I far preferred the solitude and quiet of a snowy hike with K. 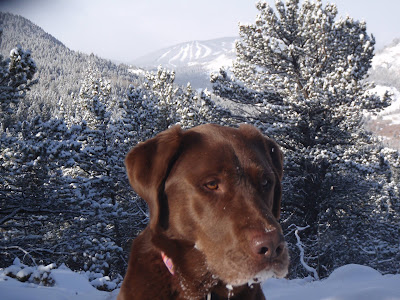 As we approached the trailhead, the late sleepers were arriving for their hikes. K met a yellow lab who she instantly invited to play. K did a play bow, initiating wild frolicking that lasted for at least five minutes. The two were a flurry of sprinting labradors making circles around their humans. I wonder what was so special about that yellow lab that made K instantly like and trust her. Usually, K is reticent about playing with new dogs. She greets them cautiously and avoids doing anything that might anger them. Not so with this yellow lab. 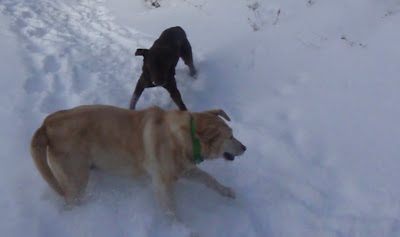 Just after we said good-bye to the yellow lab, we met the boys from our pack. K and R continued the wild playing in a flurry of snow crystals kicked into the air. Unlike usual, K initiated the play. 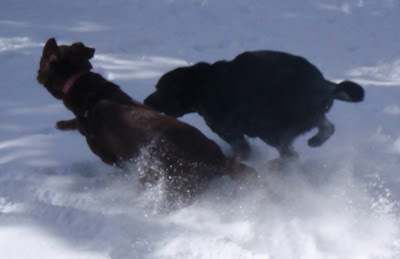 As it turned out, R had injured his leg during his run, catching his skin on a remnant of rusty barbed wire fence that has probably been lying in the forest for many decades. Before the land around us became national forest, it was privately owned and ranched. As a reminder of that ranching history, endless loops of barbed wire infest the landscape. R's cut looked nasty with jagged edges so the boys headed straight to the emergency vet, where R eventually got 6 staples, although it took many hours of waiting through more dire emergencies than his before he was treated.

In fact, when I took this photo near sunset, with the solid snowy peaks jutting above the sinking vaporous clouds, R was still at the vet. 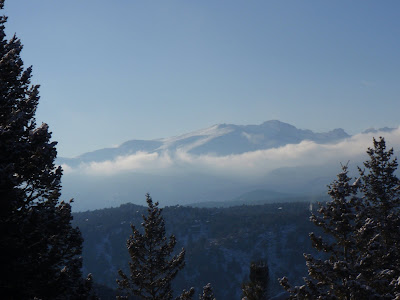 When R arrived home, with a cumbersome cone attached to his head, he fully expected extreme special treatment, including the lifting of the 'no dogs on the living room furniture' rule. Here, he snuggled into my special back-friendly recliner, soaking up the warmth of a fire. All day today, he's taken over my chair whenever I vacate it, even for a minute. Maybe he thinks that it's the "surgery recovery chair"! 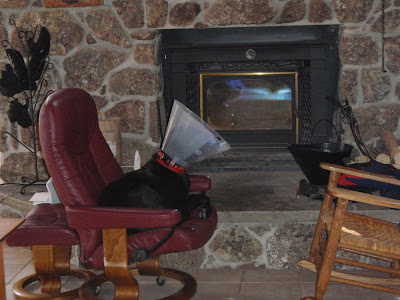 If any enterprising vets out there are looking for a business plan, you might open a weekend-only clinic next to our house. I think that our record will show that we will bring you plenty of business! I just hope that our incidents are all as benign as this most recent one.
Posted by KB at 4:30 PM