In the tracks of a mountain lion

Since I had neck surgery, my morning routine has changed because I now hike rather than go for a mountain bike ride with K. Being a brilliant dog, K has figured out every nuance of our new routine down to the nanosecond. She likes to snooze until the last possible instant before our hike. As I take her treatbag out in final preparation for the hike, she finally exits the toasty comfort of the bed. 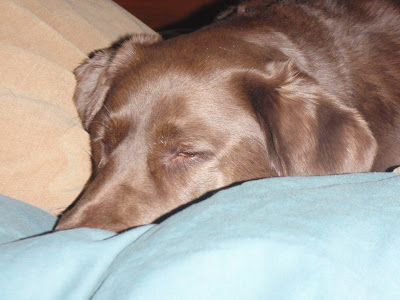 This morning, we headed up a trail that almost no one else uses, aside from deer and elk, and goes past the site where the lion killed the mule deer about a month ago. I recognized the exact spot. The uneven snow and the brown mass of rumen contents provided the only remaining hints of the drama that had unfolded on this slope. 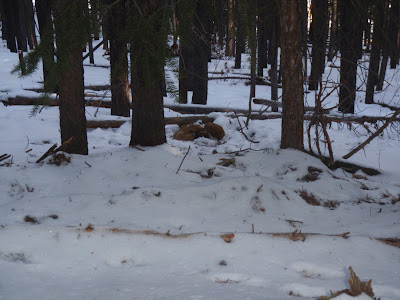 As we walked further along the trail, I noticed that even the drag marks from the lion carrying the deer to a new site remained. 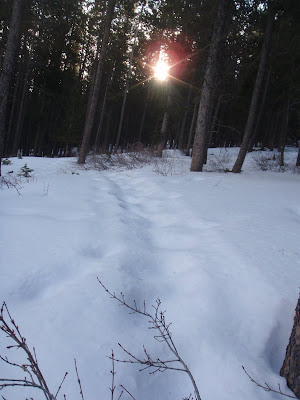 As soon as we exited the north-facing dark woods, I released K to run. She and I hurried up toward Hug Hill, eagerly anticipating our mountain view. 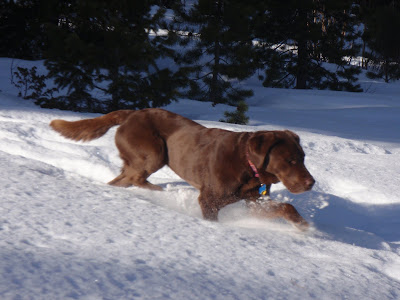 On Hug Hill, K usually lingers and relaxes with me. A scent kept luring her over the hill to the west. I called her back once, and she popped over the top. 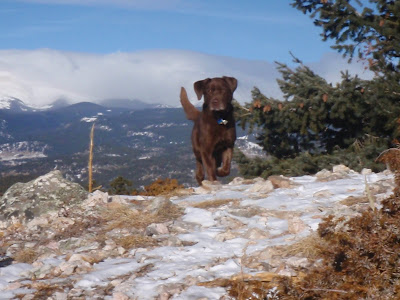 After I finished rewarding her, K oozed westward again, trying to be invisible in her quest to investigate a scent that I couldn't perceive. I called her back again. As she galloped over the peak, she flicked her tongue - a calming signal that she uses when she's running straight at me. 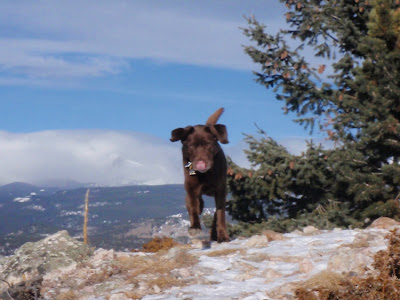 Silly me, I still hadn't deduced that I needed to be very careful about something to the west. I did, however, ask K to do an off-leash heel as we hiked down the west side of the peak. She complied until we crossed the path of some gargantuan tracks. As I noticed them, K was making loud snuffling noises as she inhaled their scent along with nosefuls of snow. 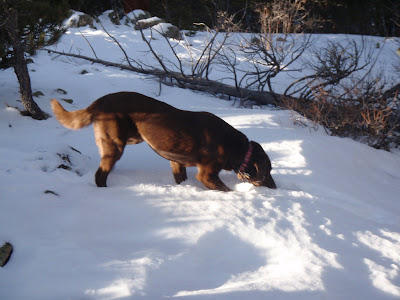 Immediately, I put her on leash and started looking at the tracks. As I looked at the tracks, she displayed another calming signal, a paw raise. I think that she was trying to calm herself. Or, perhaps, she could smell the adrenaline that was coursing through my veins. 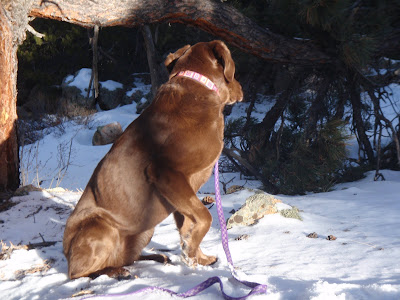 She looked over her shoulder in alarm at one moment. Perhaps her shadow on the tree caught her eye. 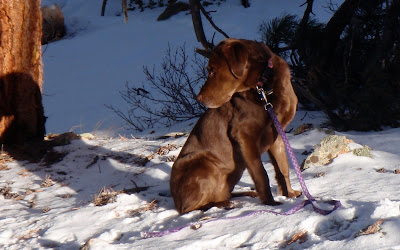 Her obsession was a track of mountain lion paw prints that headed directly down the hill about 10 yards to the west of a trail that humans occasionally use. 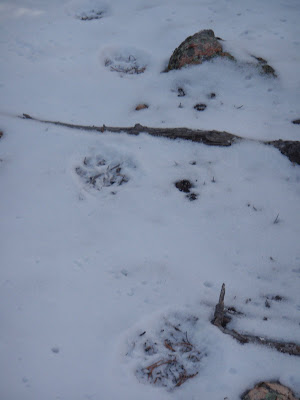 A close look at a pawprint revealed that a mountain lion was the only candidate for leaving these tracks. The edge of my chemical handwarmer sits in the far right of the photo - it's 3.5" long. The track was almost as long and wide as my crude measuring device. 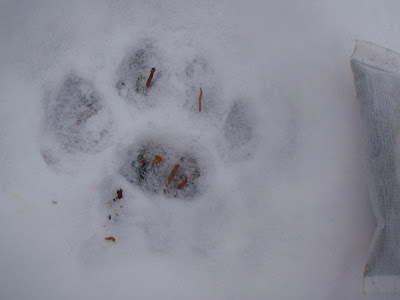 I've followed the tracks of lions over short distances on many occasions by now, and I never cease to be amazed by the sinuous routes they choose winding between trees, under or over fallen logs, and over rocks. Here, he weaved among the pine trees. 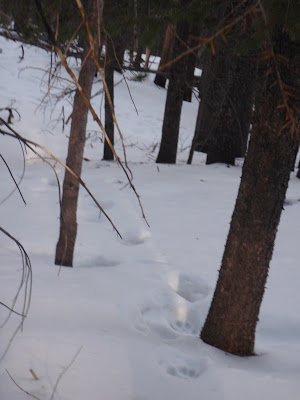 Within a tenth of mile, the tracks met a trail that most humans, except our pack, eschew in the winter. The tracks briefly veered to the right of the trail and then joined it. I could see my husband's tracks on the trail, and the lion's tracks superimposed on them. I wonder when my husband last ran on this trail? I know that the lion tracks were not on the trail two days ago when I last visited it. 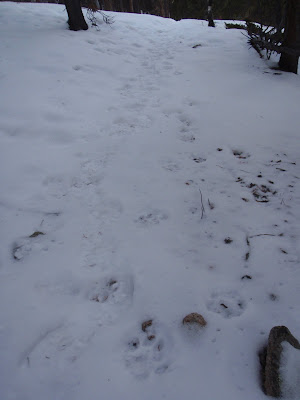 After about a third of a mile, the lion left the traveled path. At first, I lost his trail because he used a sneaky move to depart the trail. However, I stopped seeing his tracks in the mix of other tracks on the trail, and K stopped making loud snuffling noises and yanking me backward as she perused each pawprint. Based on those two factors, I knew that Leo the Lion had faked us out.

The photo below characterizes K's behavior the entire time that the lion's tracks followed our trail. She hung behind examining each one. 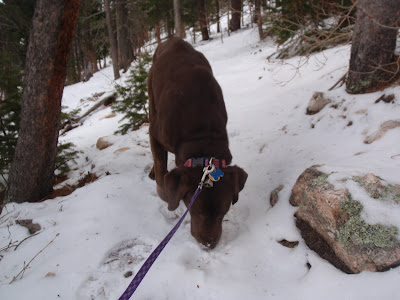 So, we backtracked a little and figured out the lion's subterfuge. Just before leaving the trail, he walked atop a fallen log that lay next to the trail, just like his brethren, the bobcat, did when I tracked him last week. In the photo below, the area around the log was trampled by me but the tracks of the lion are barely visible on the log. 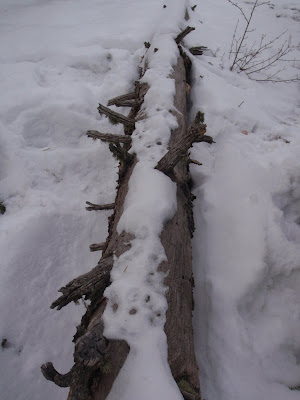 Then, the feline stepped off the downhill side of the log to hunt further down the steep slope. All along, his tracks suggested that he was hunting rather than traveling a long distance. When hunting, lions walk slowly and use a 'direct registering' walk, where the hind paw falls directly into the indent left by the front paw. In contrast, when a lion is walking fast from one hunting ground to another, the back paw oversteps the front paw, leaving a trackway with two left paw prints in a row followed by two right pawprints in a row. 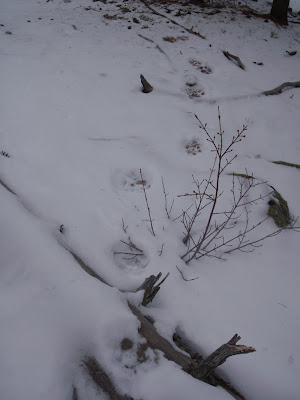 After leaving the trail, the tracks headed toward a gulch through heavy shrubs. It was such a thicket that a lion could be invisible from 10 ft away. So, we turned around immediately. See, I do have a little common sense!

We did, however, look more closely at two trees that I think that the lion clawed on his way down the hill. This behavior sharpens their claws and leaves a territorial scent mark. When I looked at the debris at the bases of the trees more closely, old lion scat was mixed in with thick layers of bark. Hmmm, perhaps this is a habitual marking point for this lion. The only clue that left me slightly confused was that a few pine cones were mixed in with the bark pieces - was a squirrel involved in this operation? I don't know... perhaps the cones were there before the lion clawed the tree. 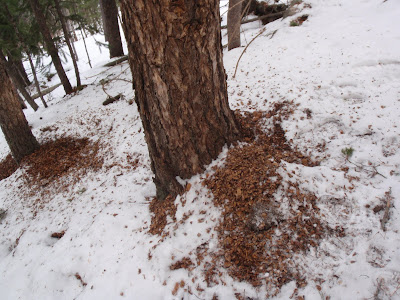 As I gazed at these signs, the pawprints and the trees, I imagined the photos that I have of the mountain lion feeding on his deer carcass and could visualize him walking the same trail as I stood on. Wow. 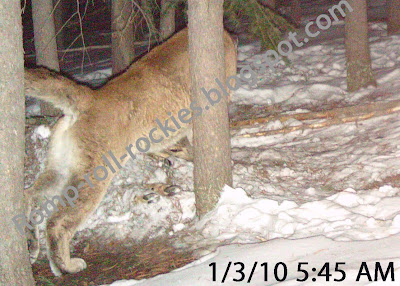 Now, after too much tracking and not enough walking, K and I were running late so we started hustling back along the trail but we did notice the amazing views. 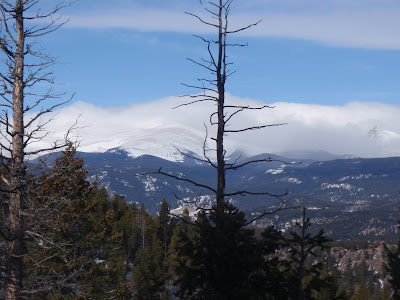 I snapped a photo of my partner in adventure. I probably would have noticed the tracks without her but I'm learning my lesson better with each passing day. I need to pay close attention to what K's interested in because it might lead to an exciting discovery, like mountain lion tracks! 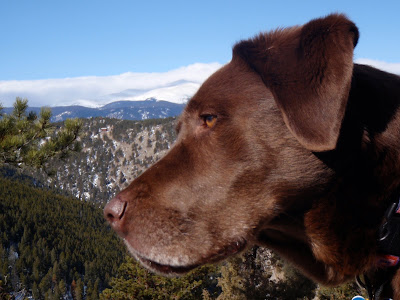