Today's hike came within a hair of being a story of a long wander in the woods, perusing tracks and enjoying complete silence. However, within the last quarter of the hike, K and I stumbled upon something extraordinary. But first, I need to tell you how we ended up on an isolated north-facing slope, still deeply covered in snow, with a band of boulders above us - perfect bear denning territory.

We started by following bobcat signs, found another scent post, and then lost his trail. His trail had led us along a path toward a ravine-pocked area that I've wanted to explore. Almost immediately, I found turkey tracks, which I examined closely with K covering my back. I've come to believe, given how many lion signs we see in our forest, that K is truly guarding me when she behaves this way. She sits directly behind me and vigilantly scans the forest while I become absorbed in a track. 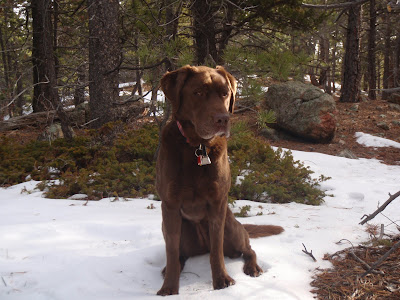 Then, we moved along, and I promptly lost my bearings. A glimpse of the faraway mountains helped slightly. 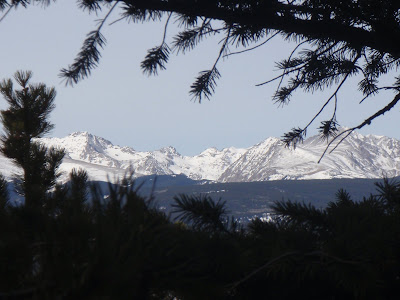 After trekking through snow and over fallen trees, I caught another peek at the mountains and reoriented myself again. The mountains float below K's snout in the photo below. 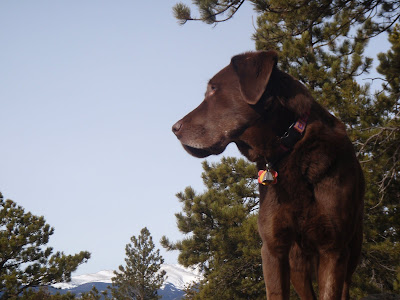 Then, an obvious gulch became our guide. I knew that it led to the bottom of the canyon that we've recently explored. I figured that if we followed it, we'd end up on the bench trail that contours along the wall of the canyon. 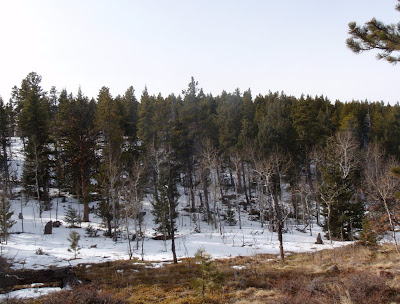 K, who was off-leash at this point, definitely favored following the gulch downward. 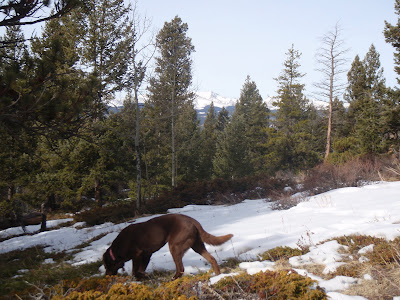 Some gargantuan tracks led us into the gulch. The sun had destroyed every detail of these craters so I had no idea who had left them except that the stride and straddle indicated a big animal, like an elk or lion. The lack of foot dragging made me lean toward a lion but the tracks were very old so I didn't expect to run into their owner. But, to be safe, I leashed K. 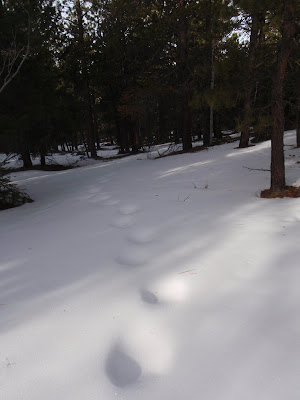 We let gravity pull us down the gulch. I knew that it was inevitable that we'd intersect the bench trail so I felt confident in our navigation. However, before we descended all the way to the bench trail, I spotted an animal trail that paralleled the bench trail but contoured higher on the canyon wall. 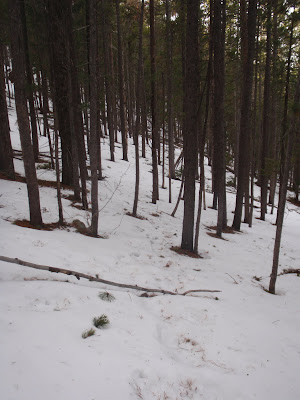 It looked like a fun adventure to follow it so we did. The tracks were all indistinct. An occasional pile of deer scat told us that mule deer sometimes follow it. I started thinking that it might be a sneaky way for a prey animal to avoid ambush by a mountain lion down on the bench trail. The bench trail is well known for lion activity.

We wandered along, seeing very few signs of animal life except an occasional red squirrel or Stellar's Jay. When we're simply wandering, K usually walks next to me (if the snow isn't too soft) or directly behind me. All of a sudden, she surged ahead, nose quivering in the wind. She led the way for the next ten minutes, pulling lightly on the leash - a rare event for her. 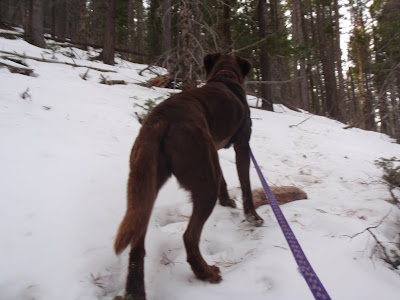 Then, just as quickly, she faded behind me. I couldn't see her (I can't twist my neck due to my surgery) so I didn't note her body language. We reached a point where the animal tracks all diverged in different directions. We had two choices. We could go straight up the hill and try to clamber over the band of boulders. The band of boulders sits at the top of the ridge in the photo below. 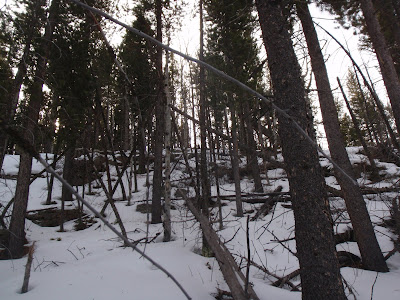 Or, we could angle up the hill through what looked like deep powder that probably hid hazardous fallen trees. 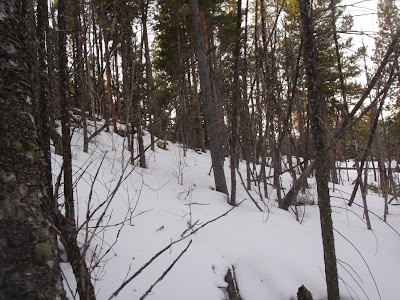 I chose an intermediate route, hoping to find an easy spot to get over the boulders. Just then, some violently chewed trees caught my attention. It almost looked like the work of beavers but this definitely was not beaver territory. The debarked trees are obvious in the photo below, and actually block the route to a cave entrance. 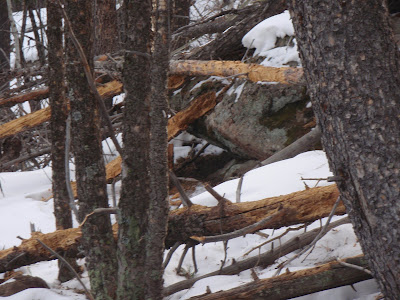 The savagely gnawed trees drew me in. I headed toward them to figure out what animal had done the damage. Once I climbed another 10 ft upward, a cave entrance became obvious. K sniffed and hung back. 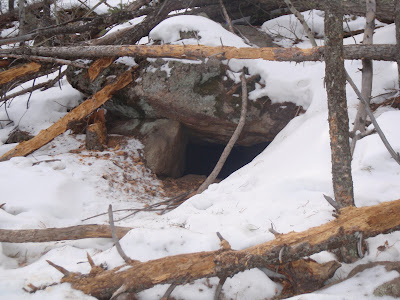 Never one to pass up a curiosity, I peered into the cave entrance and saw deep dark blackness. But, the darkness had a texture to it... so I looked harder. 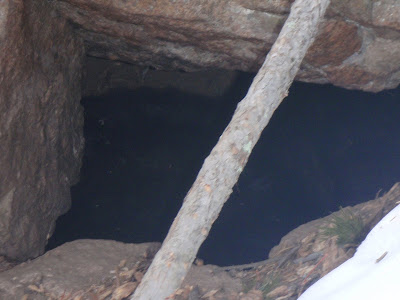 My next peek revealed something that looked like black fur and the hint of an open eye. 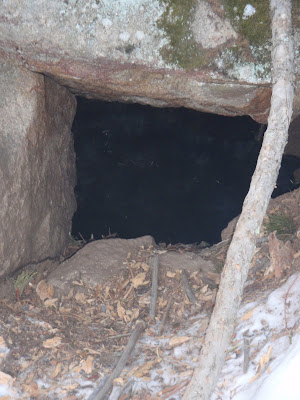 Then, something stirred in the black hole, and I saw the beautiful face of a yearling cub. 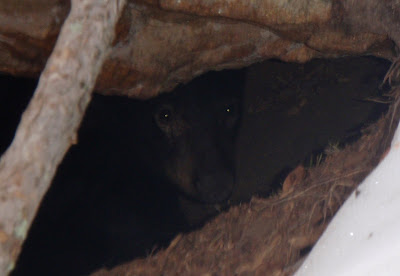 The cub started to back up behind his mom who was still lying close to the den entrance. 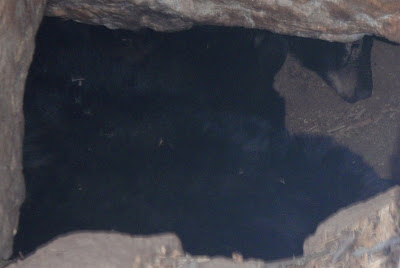 Then, the cub snuggled into his mom, and they looked like a glossy and sleepy pile of fur. 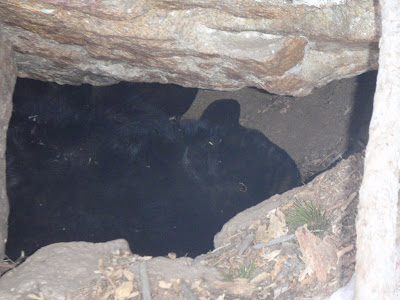 In the midst of the five minutes that we spent gawking, I recorded some video when the bears mewed and grumbled in their sleepy stupor. Sorry about the poor visual quality. I was a little bit scared, even though I know from physiology books that hibernating bears are not physically capable of moving much at all when they first awaken.

I feel guilty that I woke up the bears, who were holed up in a remote cave like good bears. If I'd known that I was next to a bear den, I would have been far quieter and less intrusive. I hope that I didn't scare them too much or do anything to mess up their hibernation.

As I looked at the den entrance, I was overwhelmed by bear scent. I'm certain that K's alert demeanor in the minutes before we stumbled on the den was triggered by the bear scent. However, I kept wondering why a mountain lion doesn't make a meal of the pair. He'd fit in the den entrance, and I know that he frequents that hillside. Perhaps other meals, like mule deer, are tastier to a lion. Alternatively, perhaps a bear can wake up fast enough when faced with an obvious threat like a lion to defend herself. In any case, I do feel certain that the den entrance will be completely covered if we get a decent snow storm. That covering will help insulate the bears and hide their den more completely.

After our short time at the den, K and I scrambled further up the slope and soon emerged in the sunlight. Believe it or not, this vista was remarkably close to the den as the crow flies. What a day! 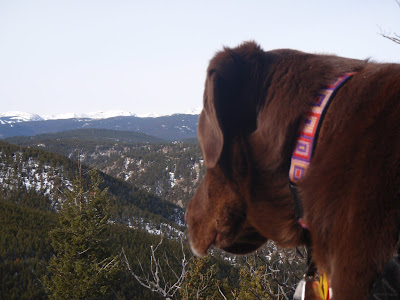