Listen to your dog

Yesterday's bobcat video included a brief section when the bobcat rubbed his/her face on the scent post boulder (at about the 37 second point in the video). I'd never seen a bobcat do this before, and I have a number of photos of cats at this scent post. Well, guess what!!!! I learned today that female bobcats do exactly this behavior when they are on the verge of estrus or are actually in estrus. By rubbing their faces on scent post rocks, they advertise their status to males. So, my video captured a mating ritual in a totally natural environment. I hope to be able to document more of it, as other bobcats check her scent in the coming weeks. Moreover, maybe, just maybe, she'll bring kittens to the scent post later. But, that momentous occasion is months away. Gestation averages 63 days (identical to dogs and coyotes, to my surprise), and then the kittens usually don't start following mom on her daily jaunts for 2-3 months. So, the soonest that we could see kittens there is summer.

Here's one of my favorite photos ever taken at this scent post. 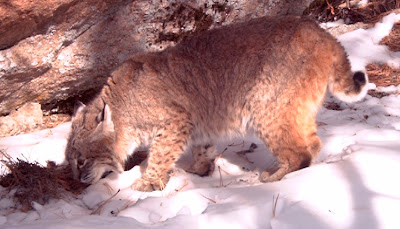 This morning, K and I started our daily hike through a dark forest with snow fluttering down onto us. I started with a thud to my step, feeling like the snow was crazy glue slowing me down. I was feeling a little sad and empty. These surgery recoveries are so hard that it's impossible not to have blue days. K had a spring in her step that made me smile despite my underlying mood. 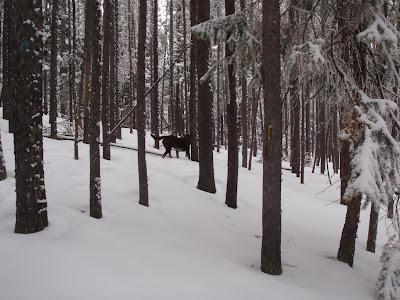 We headed straight up to Hug Hill, and K beat me to the summit. Can you pick her out as she watched my plodding progress? 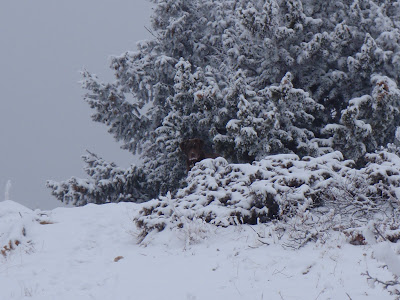 We looked around a little but the clouds curtained the mountains so a slate gray sky and some frost covered pine trees was the backdrop for a photo of K. 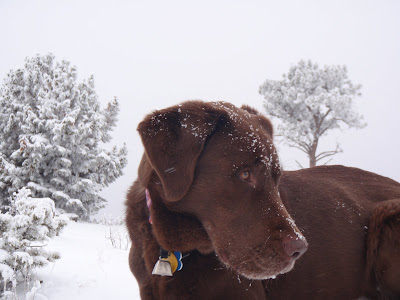 Then, I hiked down the west side of the hill and suddenly realized that the jingle of K's bell wasn't behind me. I looked back up, and she sat resolutely at the top. 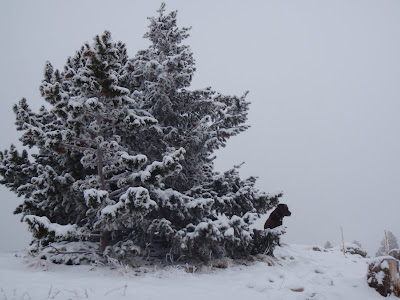 In my memory, she's only ever done this once before, on a dark day soon after S died. On that day, she sat until I returned for a hug. On that day back in early summer, I listened to her. She knew what I needed better than I did.

Today, I hiked back up the hill to her. We sat together, hugged, giggled, and enjoyed the moment. Then, I set the self-timer on the camera and took some photos. They're all very silly but this one is my favorite. 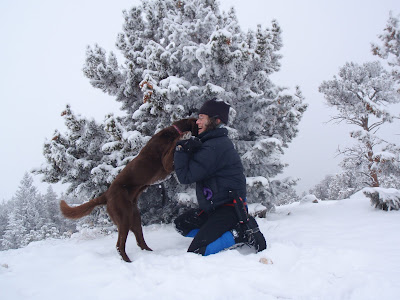 Back when I had lumbar fusion surgery, I taught K the trick of gently 'climbing' up the front of my body, using my knees, jacket, and finally shoulders as her paw holds. Today, to protect my neck, her final paw holds were my hands held by my shoulders (and I had my neck brace on to protect me). Once she'd climbed up, she showered me in kisses. I almost collapsed in giggles. My girl knows how to make me laugh!

You can also see the 'grizzly bear' can of pepper spray that I always carry on my hip in the photo. Many commentors ask if I'm afraid of the animals in our forest. I have a healthy respect for them, and the can of pepper spray plus K are my defenses.

After our silly interlude on Hug Hill, my mood had lifted. This time, K followed when I descended the west side of the hill. I'd promised myself that I'd follow 'real' trails today but an unexplored animal trail caught my curiosity. It was wide and trampled. Obviously, many large paws or hooves had created it - but last night's snow covered all details. We reached a narrow opening that the animals had slipped through. Sure enough, they'd left fur samples on the trees lining the trail. I'm guessing that it was the long black neck fur of elk but I couldn't be sure. 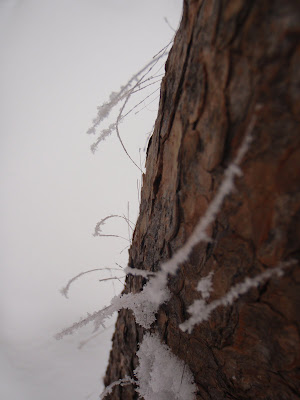 Then, as K explored slightly ahead of me, I noticed a bare patch on a dead pine tree. 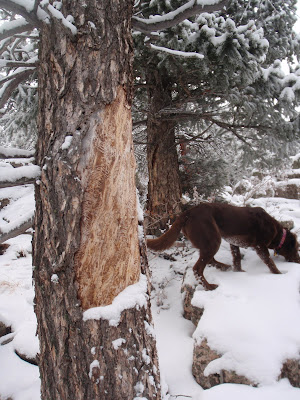 The patch had a pattern of furrows that looked like abstract art. 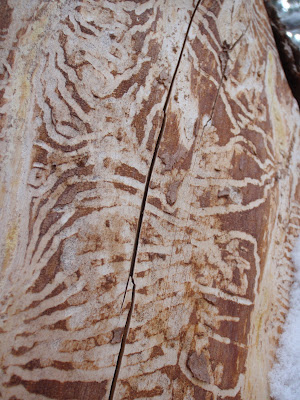 I've read that invading beetles leave these furrows as they bore their way through the cambium when the tree is still alive and has bark guarding its inner nutrients. Although it's sad that the beetles killed the tree, the labyrinth of furrows was as beautiful as human-created art. 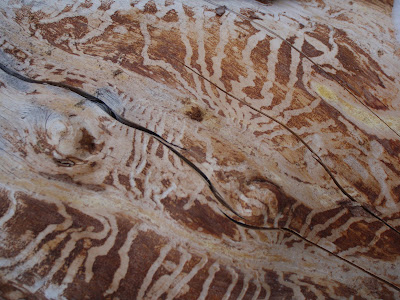 Next, our animal trail took us up to a ridge that we visited the other day. A sprawling and isolated meadow spread out below us. K stared fixedly down into the meadow. 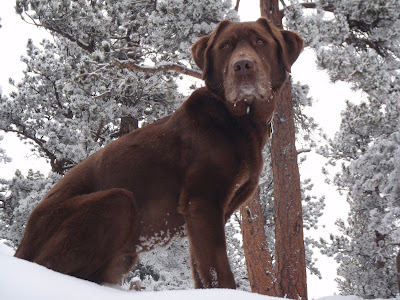 Can you see the reflection of the scene in her eye? Click on the photo to see a close-up of the mirrored meadow on the sheen of her eye. K's keen but silent interest focused on the elk who grazed below us. They've been eating, sleeping, and relaxing in this meadow for close to a week. 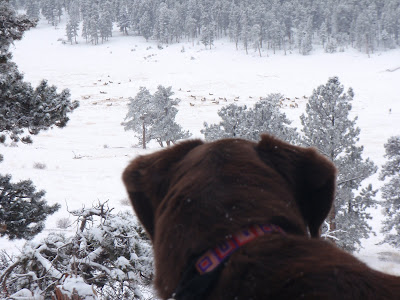 We stood among massive boulders, almost invisible to them and downwind of them. I had the impression that the elk didn't notice us. Most lay still, resting in the daytime warmth. 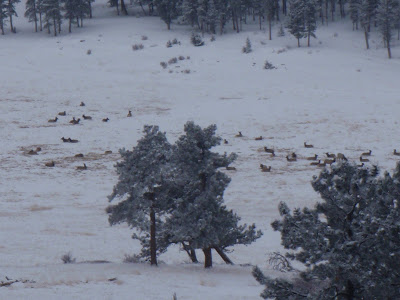 But then, the peaceful scene was transformed. A dog, who lives in a house a fair distance away, began barking furiously. First, one elk lifted his front end and then heaved his weight fully onto all four hooves. Using this laborious-looking motion, the elk stood one-by-one, until nearly the entire herd was on its feet. They stared intensely toward the barking dog.

I decided that K and I should 'disappear' behind the wall of boulders between us and the elk just in case we were less invisible than I thought. Using jumble of huge boulders to create a secret passage out of sight of the cloven-hoofed herd, we sneaked away to avoid adding one more stress for the elk.

We headed home via trails but K had worked her magic on my spirit. After I listened to her, stopping to play on Hug Hill, my mood brightened and I enjoyed wandering in the woods, learning more every day about the workings of nature. In the photo below, K is reminding me not to take life too seriously - have fun instead! 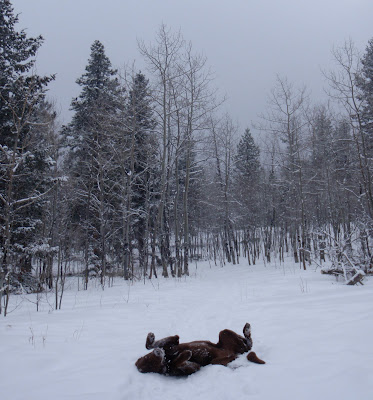 K encouraged me to wriggle on my back in the snow but I decided that my spine wasn't ready for that activity! However, the good news is that my leg pain is decreasing daily with no driving or other new low back stresses. I'm accepting that I need to minimize my time behind the wheel for now. That's disappointing but I can be happy even if my world is usually limited to walking distance around my house. After all, I have an intriguing and amazing natural world buzzing all around me - and I get the honor of exploring it!

Just as an aside, it's taking longer than expected to weave together my training videos so they'll be coming in the next few days.
Posted by KB at 6:45 PM