The Year of the Bobcat lives on

Yesterday's experience was one of the most astonishing of my life. I didn't depart on my hike searching for a bear den. Instead, by serendipity, I discovered one. Part of the reason was a commitment that I made to myself when I decided to call 2010 my Year of the Bobcat. It was a commitment to be bold and flexible - to use my neck surgery as a springboard to venture beyond my comfort zone.

Although many of you expressed terror at the situation that I stumbled upon, I was 99.99% sure that I was safe. I've researched bear behavior over the years because I run into them on the trails. I've read books and research papers about their biology, and I felt almost certain that a hibernating mother bear wasn't going to sprint out of the den and attack me. Moreover, on every single hike or bike ride that I take, I carry a huge can of pepper spray. It's the size that's recommended for stopping a grizzly bear. I'd only use it as a last resort - but it was next to my hand yesterday.

I have to admit that I feel much less scared around the forest animals than I do when I'm in the city. In terms of safety, I far prefer a jaunt through a shadowy forest to a walk along a brightly lit city sidewalk. We all have our quirks - and that's mine!

This morning, my neck hurt more than usual before I even finished breakfast. I'm working on viewing the pain as a sign of healing so that I'll take a positive attitude toward it. Nonetheless, K's encouragement to head out the door for our hike helped me immensely.

From our first steps, I knew that we had a special day ahead of us. A paper thin layer of snow fell over night, and I spotted some bobcat tracks. I retrieved the memory card from our closest wildlife camera, and I found another phenomenal photo. 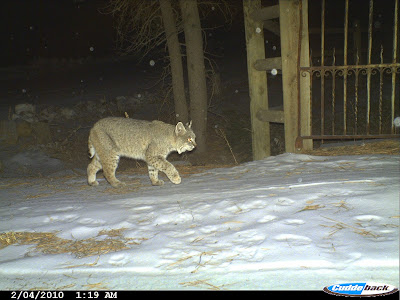 Here's the handsome dude in close-up. 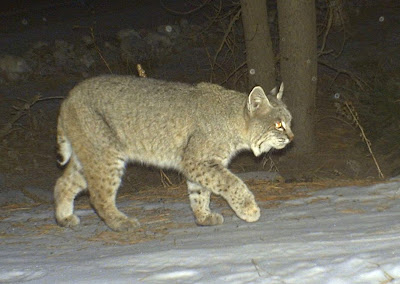 I've been reading extensively about bobcats, including a fascinating book called "Bobcat Year" by Hope Ryden. She followed the activities of several bobcats over an entire year and tells the stories of their lives. It's both enchanting and sad. A bobcat's life is difficult beyond our imagination, between avoiding animals that might hurt them (people, coyotes, lions, and other bobcats) and finding enough food to survive. For a bobcat, a rabbit is the best meal imaginable. Perhaps that culinary preference explains why many of my bobcat photos occur in places where rabbits live.

I've learned in my reading that each bobcat likes to have sole possession of his/her territory. So, the forest around my house undoubtedly has important property lines that I'm not aware of. These are the lines between the bobcat territories. Occasionally, the edges of territories overlap but the neighboring bobcats avoid each other because they'd prefer not to experience a life-threatening fight. For that reason, I'm guessing that the bobcat who I photographed last night is the same individual as the one who visited slightly more than a week ago. He looked more confident and like he was moving faster last week. 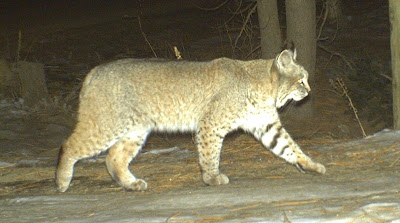 Today, I was able to track the bobcat. I followed his tracks off our property and then lost them for a little while. However, as we climbed a snowy slope, K found the tracks again and alerted! In the photo below, she's just pointed out the tracks to me. I think that she's a huge asset in tracking, if I'm smart enough to read her communications correctly! 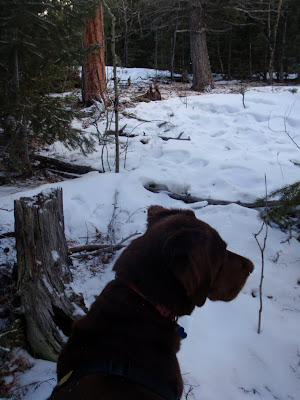 Below, I've included a photo of the tracks that K found! The bobcat was climbing snow covered slope where the drifts could have swallowed him whole if he'd stepped in the wrong place. Interestingly, however, I've learned that some bobcats hunt rabbits by hiding underneath the snow next to a rabbit trackway. Then, when the hapless mountain cottontail hops past, the bobcat bursts out of the powder to pounce on the rabbit. 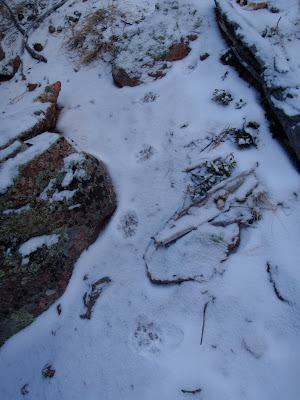 Today, I learned that in areas of deep powder, bobcats use their agility to avoid having to plow through the snow. The bobcat who we followed today used logs as his primary walking surface. 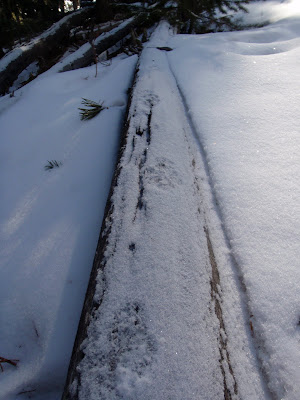 When he reached the end of one log, if it was physically possible, he leaped to another log, completely avoiding deep snow. 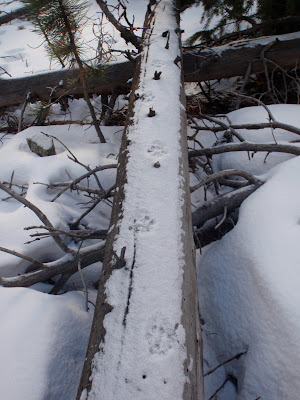 Usually, he landed on the next log so gracefully that I could barely discern a hitch in his tracks. Once, I found a spot where he landed with all four paws under him and seemed to slip a little. 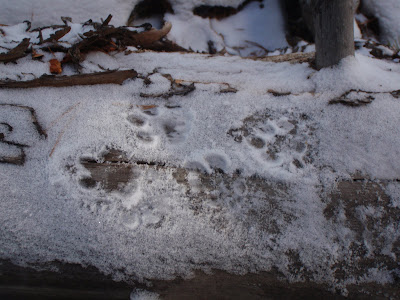 In one spot, he found a fallen tree that hung about 2' off the ground. A rabbit trackway went directly under the log. It appeared that the bobcat perched on that tree for a little while, waiting to see if a rabbit would hop under his log. Based on tracks, I think that his wait was in vain. A bobcat pawprint is in the lower left corner of the photo on the log. The rabbit tracks go from the bottom to the top of the photo in the snow below the log. 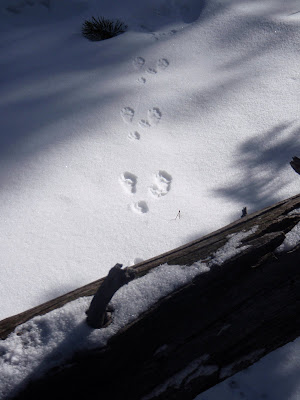 After that log, we approached the spine of the ridge, and no more logs provided the bobcat with easy travel. His paws sunk deeply into the snow. 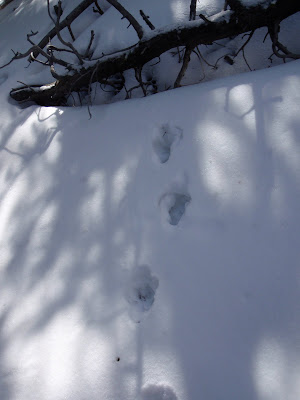 Then, we crossed an area with a higher density of rabbit tracks than I've ever seen. As the bobcat perused the rabbit trackways, the hard snow supported his weight. In some places, the tough snow crust prevented him from leaving any trace. We lost the trail on the crusty snow and then the dry grass of the top of the ridge. But, we'd had a glorious time walking in a bobcat's pawprints, viewing the world from his perspective for the first part of our hike.

From the ridge, the clouds loomed with bluebird skies behind them. Even K stopped to look at the show! 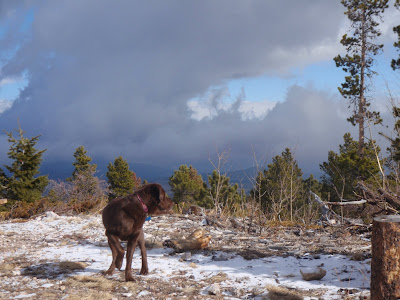 And then, seeing the camera, she sat in a dignified way. She's such a camera-hound! 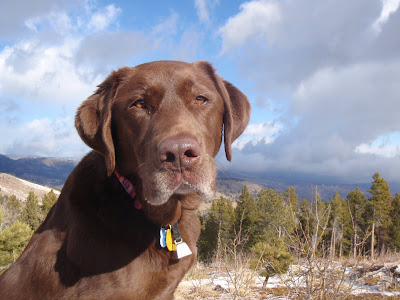 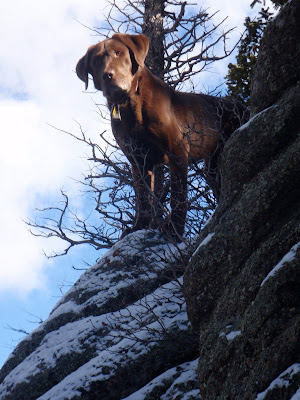 We ended up mired down in deep snow. Here, K is standing upright but her back barely clears the snow! 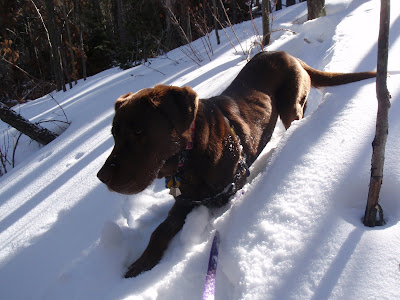 We found our way out of the bottomless powder, with the very smart K leading the way. 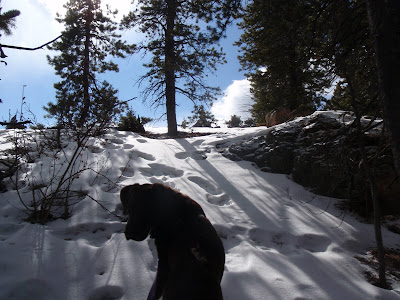 For me, today's hike encapsulated my Year of the Bobcat philosophy. I didn't leave home with an exact plan but I let nature lead us through forests, over the ridges, and to the peaks. My wanderings with K since my surgery contrast starkly with my mountain bike rides from before surgery. In my wanderings, one of my rules is that I visit someplace that I've never been before each day. Moreover, I'm flexible about the route - if animal tracks lead us someplace unexpected, that's great! That, by itself, has let me discover things about my world that I never would have otherwise discovered. Here's to the 'Year of the Bobcat'!
Posted by KB at 7:30 PM