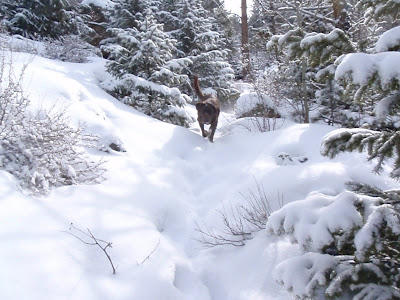 K and I headed toward a steep descent into a canyon at the start of our hike. Only a few mountains shined through the snow clouds. 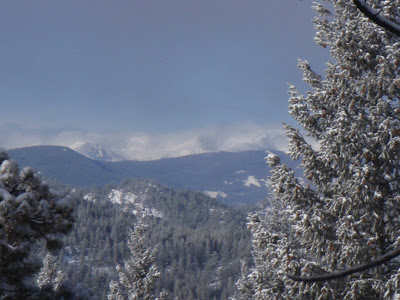 We followed a rocky slope down toward a trail on the canyon wall. K loves posing on boulders and her statuesque poses left me no choice but to photograph her with the mountains behind her. 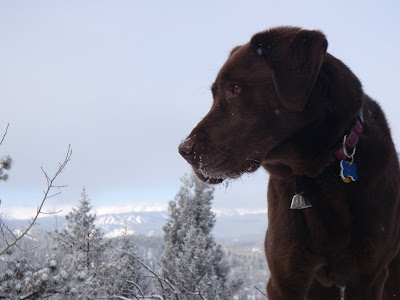 Once we found the trail, we wound along the wall of the canyon at an almost a constant elevation. This trail is replete with mountain lion and bobcat signs all year long plus bear signs once they awaken. Usually, the mountain lion scent posts sit under pine trees with dense canopies so that the scent post never gets covered with a heavy layer of snow.

I've identified the most ostentatious scent post so that I can put a wildlife camera next to it in the future. This scent post also appears to be used more frequently than the others. Multiple deep divots pock this spot, where mountain lions have kicked back the dirt with their hind paws. As we approached the scent post this morning, K surged ahead, and to my utter surprise, she decided to add her opinion to the scent post. Yes, the photo below shows K taking a 'natural break' (cyclist terminology) directly on the scent post. Audacious, don't you think, especially for a cautious canine like K? 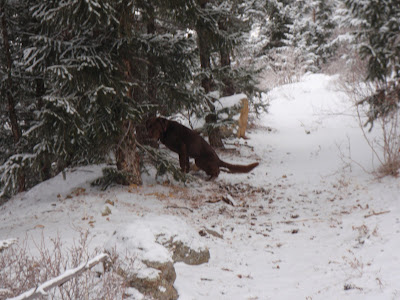 After an uneventful hike through the fresh snow, spotting almost no new tracks aside from a few rabbits and squirrels, we climbed back up the canyon wall, using a trail this time. Pine saplings overhang the narrow trail, and covered K's face with snow. Behind her, you can also see that the snow clouds had lowered down over the mountains. 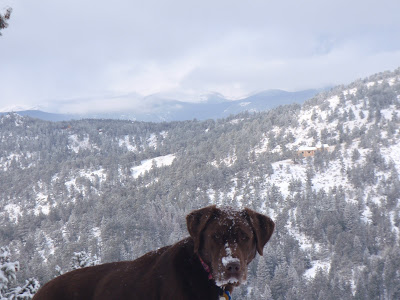 On our way home, I picked up the memory card from the wildlife camera next to Bobcat Boulder. Believe it or not, the bobcat had visited two nights ago, within about 12 hours of the camera installation. The IR camera captured some video, which I combined with an older very short video clip taken at the same spot.

I believe that we're now in bobcat breeding season. In this season, the use of scent posts and vocalizations becomes more intense. If 'our' bobcat is a male, he'll check and urinate/defecate on his scent posts regularly to keep out other males. Moreover, he'll frequently check whether females who live on adjacent territories have made incursions into his territory, advertising their availability for mating. If 'our' bobcat is a female, she'll behave similarly, except that she'll try to drive away any female invaders by keeping her posts freshly scented. Moreover, she'll check for available males who have left her messages at the scent posts.

In general, unlike mountain lions, a bobcat maintains sole possession of his/her territory. That privacy means that they have to travel away from their home field to find a mate. In contrast, male mountain lions tolerate females (but definitely not males) living in territories within or overlapping theirs, making the search for a mate a tiny bit easier.

In either case, I'm guessing that my 'scent post' cameras will be seeing frequent action in the coming weeks.

I just discovered inspiring bobcat photos at my friend Meriwether's blog and a video at SMRP's blog. A young-looking and lanky bobcat explored around their barn in the middle of the day! The bobcats are trying to infuse us all with their spirit!

Tomorrow, I hope to post a dog training video. I've recently taught R the rudiments of "take it" (i.e., pick up an object), "hold", and then "out" (i.e., deliver it to my hand). It's fun to watch him throw his frenetic energy into figuring out what I want him to do in new game.

With K, I've been playing scent discrimination games, where she has to pick the pill bottle containing the scent that I've trained her to find. I hope to show videos of K's training in later days.

Training both of them is super fun, primarily because I use shaping and positive rewards to teach them new tricks. It makes me forget my worries and look at the world from the point of view of the dog whom I'm trying to train. I like that viewpoint!
Posted by KB at 6:40 PM