Sunrise and a step forward

As K and I hustled out onto the trails this morning, an inky darkness still ensconced our forest in mystique. I wondered whose eyes watched me from hiding places. I wasn't scared by the eyes that doubtless followed me but rather intrigued. And, I was happy that wild animals almost certainly hovered nearby.

We "hustled" because I wanted to climb up to a nearby high plateau before the sun crested the eastern hills. We climbed the boulder-strewn hill, passing within 100 yards of what I've dubbed bobcat rock, a favorite scent post of the felines. As we crested it, the eastern skyline glowed with the promise of a new day but the brilliant sun hadn't climbed over the peaks yet. 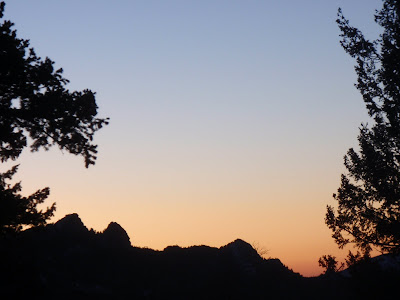 We walked along the plateau, scanning for animals on the fringe of the forest. We saw none but I'm sure that they hid in plain view by freezing in place.

The western horizon provided a breath-taking reward for our early start. 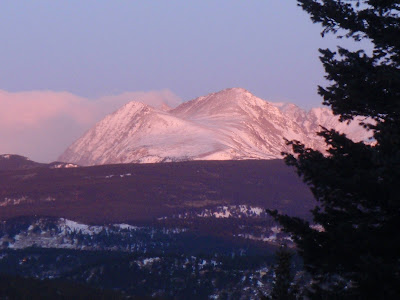 This view stunned me and reminded me of all that I have to be thankful for. I sat on a log, with K next to me, and soaked up the alpenglow, a sight that infuses me with love for our mountains and the alpine life.

Part of my motivation for hiking at sunrise was that I had a big day ahead of me. I drove a car!!!!! Yes, I know, it's not an event worth reporting for most people. But, I've been banned since surgery, and today's step forward broadens my horizons so I can begin enlarging my world again by driving to nearby trailheads for hiking. Moreover, as I drove along my road, I thought to myself "Next, I'll be riding a bike". Now that's an optimistic, if far flung, thought!

My excursion wasn't just a joy ride but trip to my physical therapist's office. To any of you with physical challenges like mine, a great physical therapist is worth his or her weight in gold. Mine is helpful beyond belief, understanding, gentle, and smarter than most doctors. I'm not kidding. She's worked on my back for close to a decade, and I feel very lucky to have found her.

I took K with me to my appointment so that she and I could stop someplace novel for a hike n the way home. From our first steps away from the car, I could tell that K and I had that resonance that makes some hikes together magical. She sprinted along the logging road with joyful abandon but soon stopped to wait for me. I was as excited and happy as she was. For one, the trail was a blank slate with no tracks - ideal for sniffing out animal activity! And second, we were free to hike in a new place! 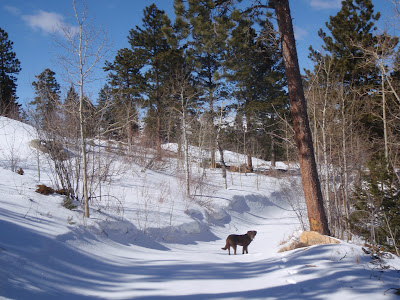 Then, when I didn't gallop at full speed to her, K came back to get me, her body language like the excited shouts of small children climbing on an exciting amusement park ride. She ushered me along the trail. Despite the high noon sun, her shadow still loomed large. 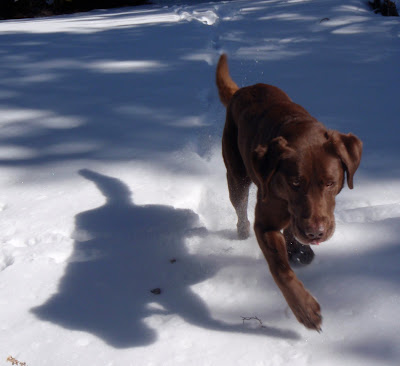 Early in the hike, we contoured along a south-facing slope with scant snow. I thought that I spotted an ideal bobcat scent post, where the dominant local feline would scratch the earth and leave his/her scat to deter incursions by other bobcats. It was a hulking boulder, at least a story high, with many overhanging sections that protected the ground below from snow. Moreover, aspens grew next to the boulder, providing cover for a bobcat. 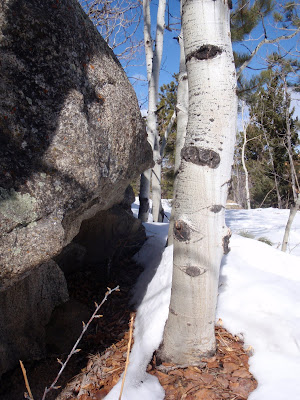 My neck brace prevents me from looking up to the sky so I pointed my camera at the overhanging boulder and aspen without looking - and voila, I found out that the lichen covered boulders were more beautiful than I expected. And, the overhang was more dramatic than I expected. 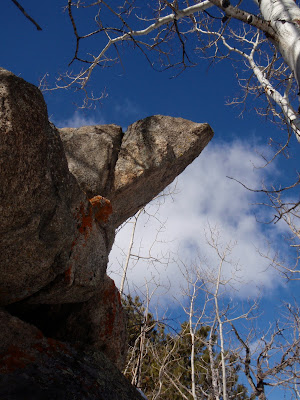 Alas, my choice of an optimal bobcat scent post didn't match the bobcat's choice. I found no trace of any feline markings. I need to work on my "bobcat mindset"!

Soon thereafter, we traipsed onto a north-facing slope, leading down into a gully and then rising up onto another bare south-facing slope. In our steep terrain, oppositely oriented slopes look like divergent universes! 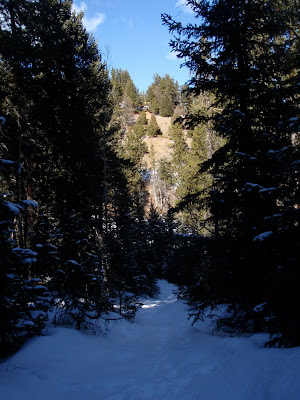 K's intensity skyrocketed in this snowy section. She stared downhill, wired with the intensity of a dog who smells a freshly killed deer. Believe me, I'll never forget her drive on the day that she hit a venison jackpot, thanks to a recent kill by a mountain lion. 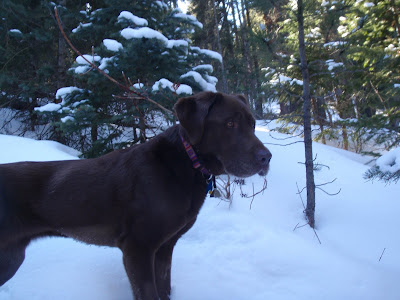 I told her to "leave it" and "heel", and she tore herself away from the enticing scents. However, she next turned her attention to the uphill side of the trail, where boulders covered in pillows of snow predominated. When she gazed uphill, she had her "there's a bear up there so we should flee" look. The terrain did look ideal for a bear den. It's amazing how expressive her body language is, and how opposite her reactions are to lion kills versus bears.

To my surprise, we found our bobcat signs in the deep snow of the north-facing slope. We followed his trail for a while. 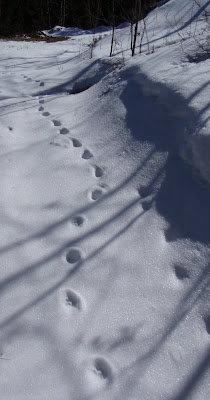 A close look at a track confirmed that it was left by our icon, the bobcat. 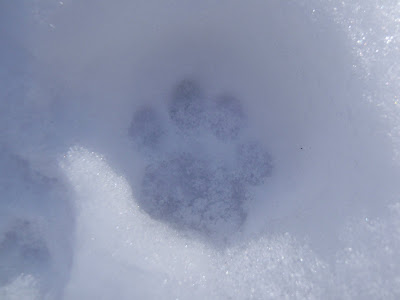 And then, he trampled, and made a small hill for a scent post, right in the middle of the snowy trail. I definitely need to work on my "bobcat mindset" because my chosen bobcat scent post was definitely nothing like this one! 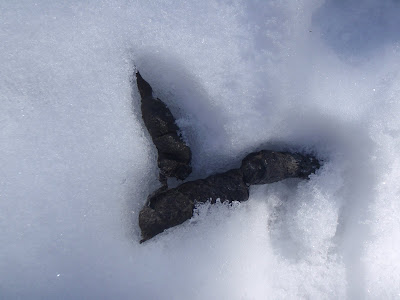 This trail traversed one gully after another, so we alternately walked on dirt and then a few yards later through deep snow, depending on the slope's orientation. We finally turned around at the crest of a south-facing slope. K didn't want the fun to end, as she stared at me in an attempt to entice me to hike further. Next time, K, I promise. 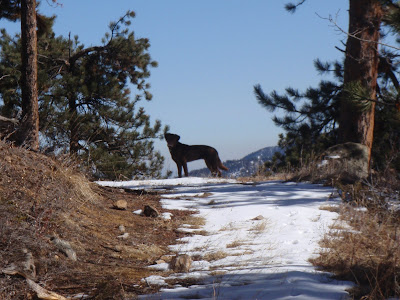 Today's hike with K was one of those 'special' ones where I felt like we moved as partners, both enjoying a ramble in the woods and both watching out for each other. What would I do without my canines? I have no idea.

All in all, I think that today was a step forward toward a normal life. If my recovery were following the 'usual schedule' that I was warned of before surgery, I'd have to wait another month before driving. So, today was an auspicious step. It will expand our world, allowing us to hike in a variety of places. I'm happy about that!
Posted by KB at 7:00 PM