R's CUE surgery for his congenital elbow dysplasia was 7 months ago! He's made incredible progress in that time. He can run further and faster now than he's been able to do for years.

In fact, R and the Runner did a big run while we were in Utah. They ran up about 2000' over 4.8 miles of very rocky terrain to an incredible lookout point. Then, they walked back down, for a total of about 9.6 miles. The Runner decided to walk rather than run down because downhill running abuses joints more than almost anything else. R looked great with no limping after that outing, his longest since a year before his surgery. 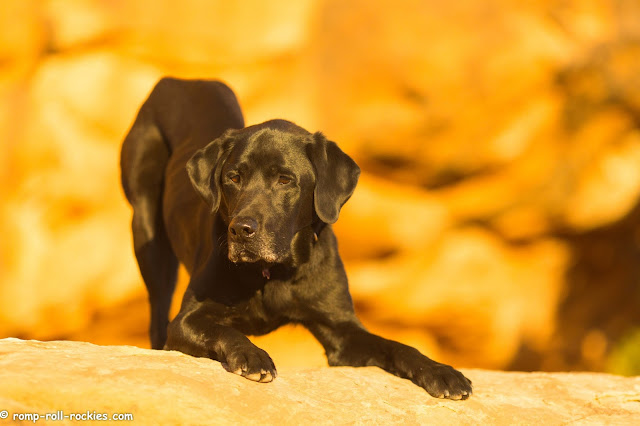 We have continued R's rehab program because keeping his stabilizing muscles as strong as possible will help keep the implants inside his elbow healthy for longer. R is now 9 years old - an age when many Labs have stopped running and romping - but he's looking better and is running further than he has in years.

I included this update on his rehab as part of the Positive Dog Training Blog Hop because I could never have taught him to do all these exercises without the skills that I've gained as a positive trainer. Positive training has been a gift to us throughout his rehab. I've been thankful that I know about it a zillion times when teaching him new exercises. Quite simply, it would not be possible to teach these complicated exercises without a clicker, treats, and positive training skills. The key is to break each of these exercises into tiny parts for teaching them - and then putting the parts together for the final exercise. You are seeing only the final exercise in the video.

The toughest thing that I'm teaching him now is to walk sideways with all four paws up on his big yellow peanut (last thing on the video). I have been teaching it one step at a time. I roll the peanut a little to the side, and I say "step", which means to take a lateral step with front and hind limbs to stay on top of the peanut. If he takes the step, he gets a treat. He's making great progress.

You'll see in the short video that I still reward him with treats regularly during the exercises. The main reason is that the rewards keep him motivated. R is really tired by the end of a session, and I have to push him to do one more rep or one more exercise. I "push him" by rewarding him lavishly.

You can watch the short video either here or at Youtube.