In the past three years, we've gone from never having seen a moose in our neck of the woods to seeing them regularly.

As some of you remember, a moose literally charged into my world. When moose first arrived in our area, I was charged on three occasions. Other people were also charged, usually by a mother moose with a calf in tow.

The great news is that both the humans and the moose seem to have learned about each other. The moose seem to know where they're likely to see us humans and to avoid those spots. And, if they're in a "high traffic" trail area, they are wary but usually let people pass.

The local people, including me, have also learned how to coexist with moose. My "moose radar" is almost always active. When I'm with Shyla, I watch her body language closely because it is usually the first hint of a moose in the area. They like to stand perfectly still among the trees, and it's very hard for the human eye to pick them out.

This photo was from about a week ago when Shyla froze in her tracks, leading me to scan the area. I would have never picked out this moose and her calf without Shyla "telling me" that they were there. 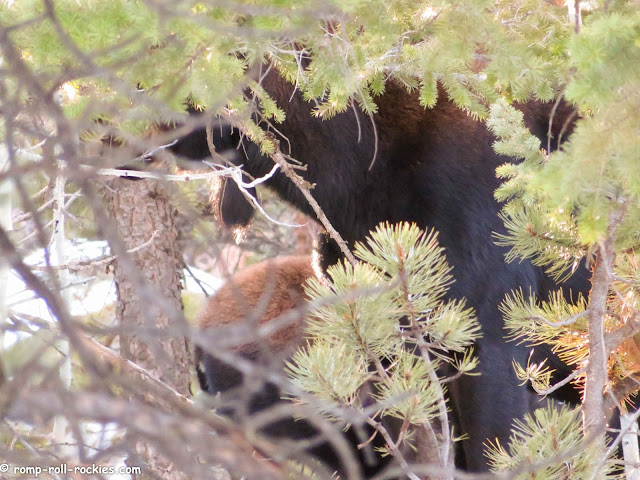 Indeed, on one occasion when I was charged by a mother moose a few years ago, I never saw the moose before she started charging. I was pedaling along with Shyla nearby, and a moose came crashing out of the forest. Shyla hid behind me, and I yelled and screamed, scaring away the moose. I'm so glad that I've gotten a bit better, with Shyla's help, at knowing where they are and giving them a wide berth.

A trail camera caught a group of moose coming into our area recently. I believe that this was the mother moose. 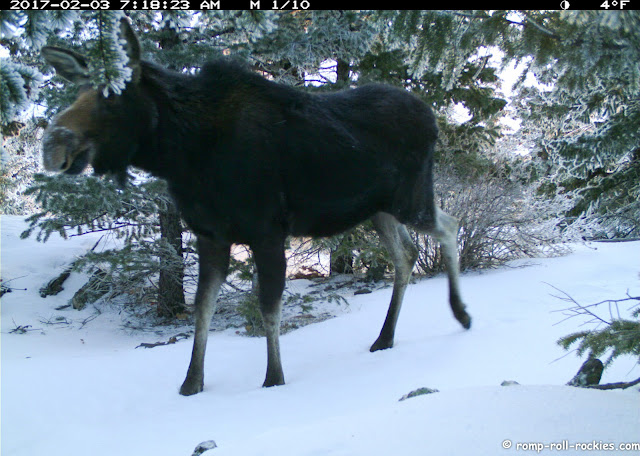 I think that this was a young male moose, probably not her most recent calf. 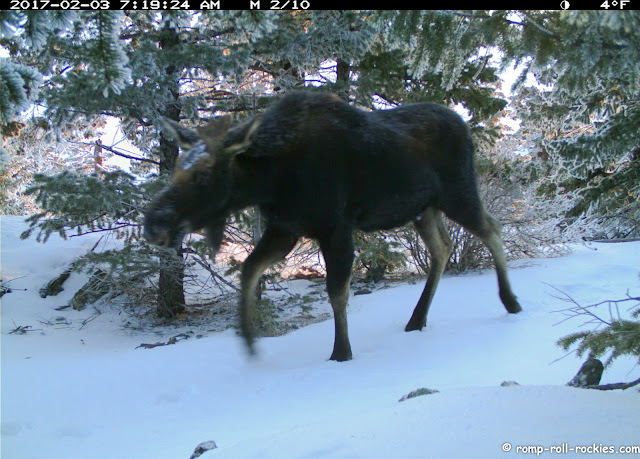 And, this was her calf. 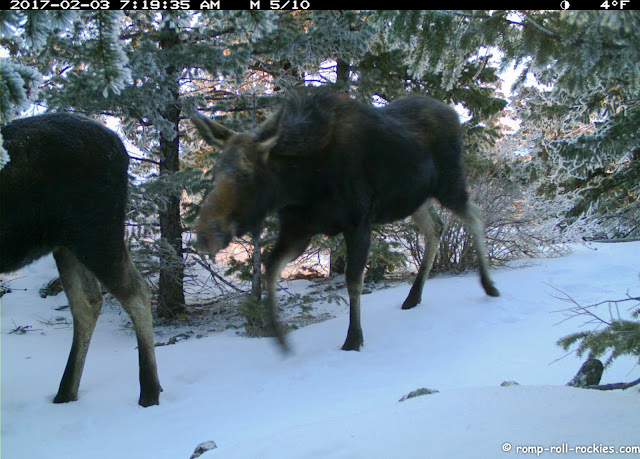 These three lingered in our area for a while, with the male sometimes near the mother-calf pair and sometimes not. When I saw them most recently, only the mother and calf were together. Mom is on the left and the calf is on the right. I was using a very long lens. 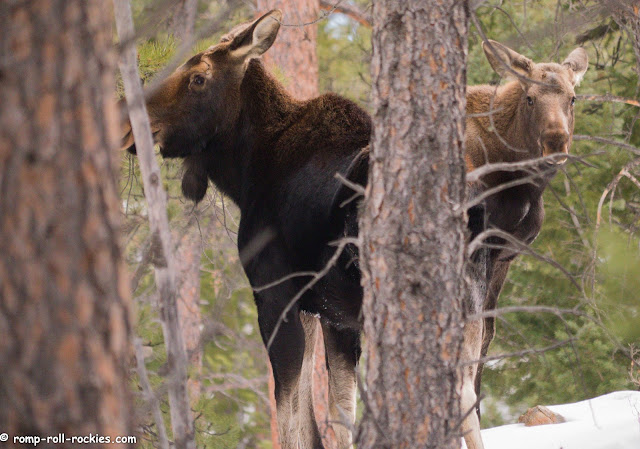 Despite my presence, the mother went to lie down a few steps away. 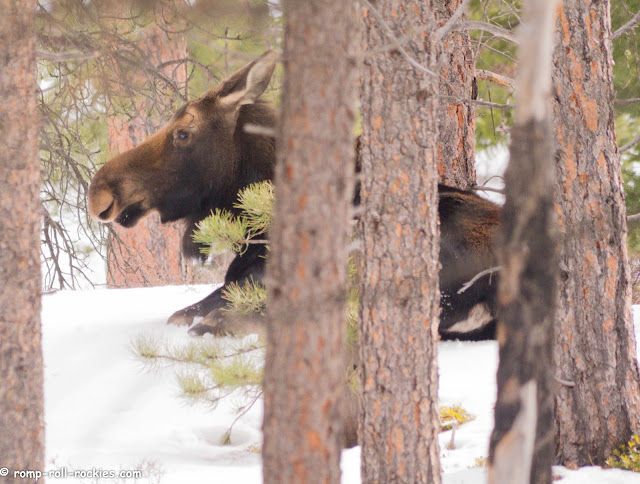 And her calf just stood around while I was present. 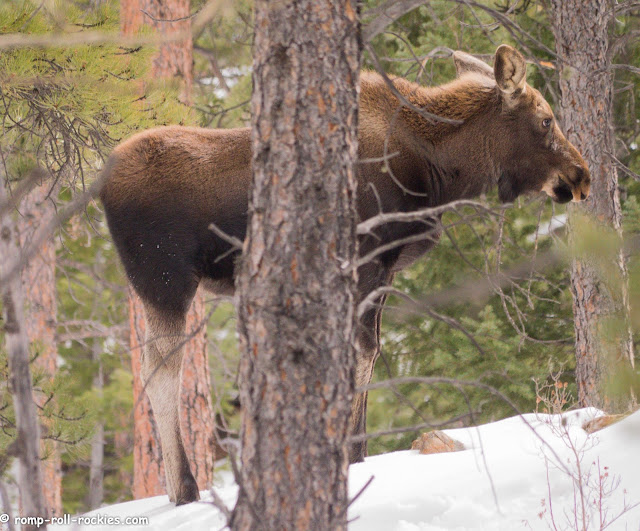 I went on my way, heading out to do a loop on my bike. Unfortunately, this mother-calf pair were occupying a trail intersection that I had to pass through to get home at the end of my ride. I hoped that maybe they'd moved before my homeward journey but they hadn't.

On my way home, I first saw the calf, lying in the snow. 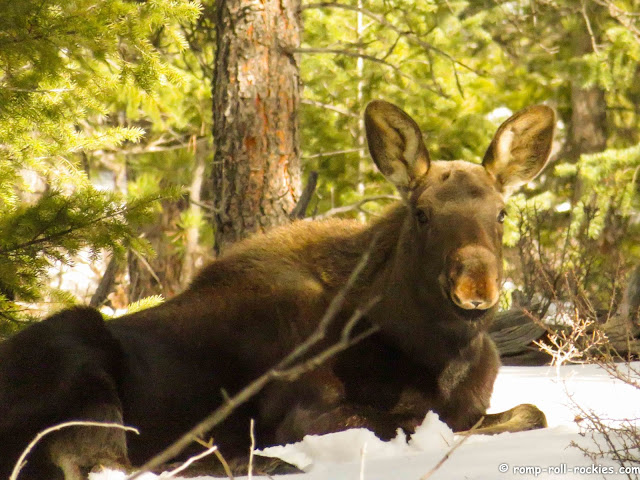 Then, I spotted mom. Something about her face made me head off into the woods making a huge arc around them. She scared me with that look. 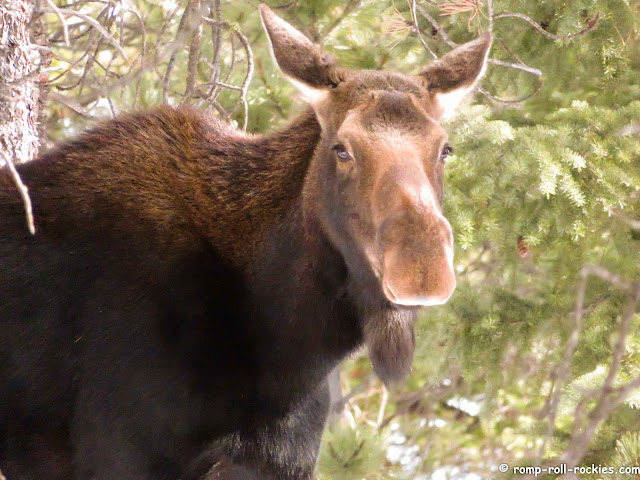 I think that it was her focus on me that scared me. In any case, I waded through knee-deep snow while pushing my bike to get out of her range, and I passed the pair unscathed.

It's become a pattern in our neighborhood that we tell all our local friends where we spotted moose so that they can be extra careful in that area. I'm not sure how useful it is because these animals can travel a long way quite fast when they want to!

For the moment, it seems that we humans and the moose have reached a state of coexistence. However, I truly believe that our wildlife officials should have educated the locals when the moose started moving into our area. They are an "introduced' species, meaning that they were never naturally here until some were transplanted from other states. It seems inevitable to me that the local people would not know how unpredictable moose are when they first ran into them in the forest or in their own yard. 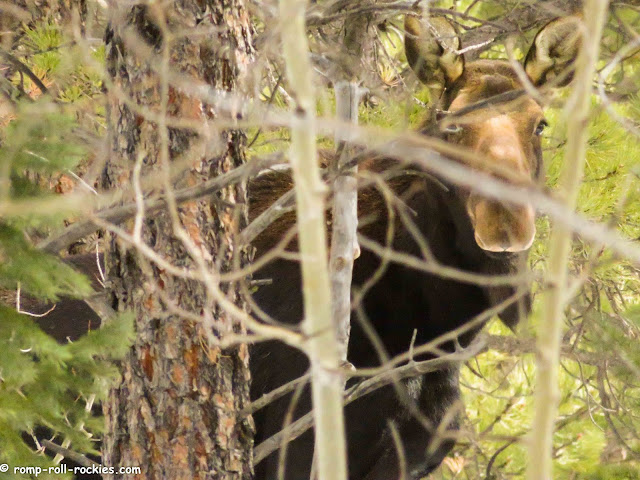 Moose certainly have changed the forest. They are the only wildlife that don't flee from humans which sets up some interesting situations. Last week, a mother and calf decided to settle in on our driveway. They moved on before it became an issue. However, a neighbor had to hitchhike rather than use her own car because it was being licked by two moose!

Now that's an interesting excuse for being late to an appointment.
Posted by KB at 4:07 AM