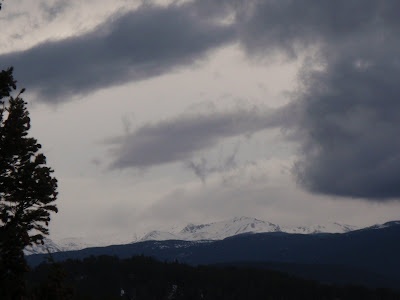 I opened my blurry eyes to white-covered skylights and about 4" of new snow. As I ate breakfast, a coyote with a luxurious reddish tan coat and thick black-tipped tail appeared outside the window. He seemed nervous, constantly shifting his eyes from one direction to another. Because my husband and the lab trio were out hiking and I wanted to avoid our dogs romping into the coyote, I watched briefly and then scared him off. He was hyper-wary and fled when I simply cracked open a window (I'd been planning to try yelling at him). He loped and then walked through deep snow straight uphill from our house. 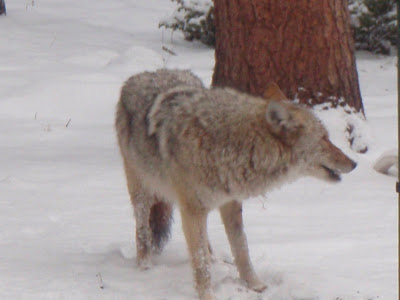 The coyote looked huge to me. Standing by himself, I would've guessed that he rivaled our labs in size. However, our labs are each about 55 lbs, and my book about western coyotes gives a wide range, 18-44 lbs, for their weight. Either this guy ranks at the top of the range or his plush fur coat makes him look heavier than he actually is.

Later, when I looked for tracks, it appeared that he'd had at least one partner waiting in the forest. Moreover, a bobcat had walked almost the same path as the coyotes. I wondered how close they came to bumping into each other and how such an encounter would've gone down. I suspect that the bobcat would have fled up a tree but I don't know for sure. A bobcat track is below - it's a bit distorted because the cat was using a direct-registering walk, meaning that the hind paw landed almost exactly in the front paw's track. 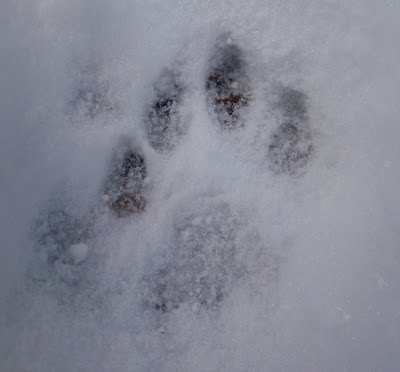 After the coyote vanished into the woods, the dogs returned from their hike, preceded by a skunk stench. Western Spotted Skunks live at our elevation, although they're fairly rare. Yesterday evening during our hike, we smelled skunk spray near a trail, but didn't see the distinctive black and white creature. This morning, our amazing tracking dogs (ha) found the skunk, and, of course, got sprayed. Not a full-on spray, where you can smell the dogs from 50 yards away outdoors - but a spritzing that left them putrid enough that my husband banished them to the mudroom until they were de-skunked.

Videos and books show that spotted skunks go through a whole series of warning behaviors before they spray. They stamp their feet and posture, trying to warn off their attackers. I imagine that K and R were totally oblivious to the warnings, and charged like labradors in a china shop. When a spotted skunk decides to spray, he does a handstand, literally balancing on his two front legs and sprays the attacker in the face. The fact that this skunk had released some spray yesterday probably spared us his full fury. The good news is that Nature's Miracle Skunk Odor Remover works well. We'd kept a bottle in our cabinet for years, knowing that a household of three labradors would get a skunking again someday.

As a side note, the sage S stayed out of the fray and smelled like roses by comparison to the young hooligans.

After all the excitement, I headed out for a ride on my Fatback with K and R. The Fatback with its 4" wide tires rules - I wouldn't have been able to negotiate the combination of the old crusty deep snow and the new powder on a regular mountain bike. I was grateful to be out on the trails rather than slogging along on the muddy roads. The Divide was completely obscured by clouds at the start of our ride. 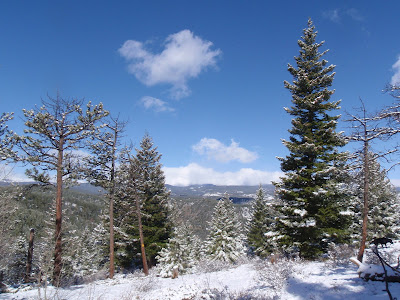 But, then the sun burned through and the mountains sparkled with new snow. 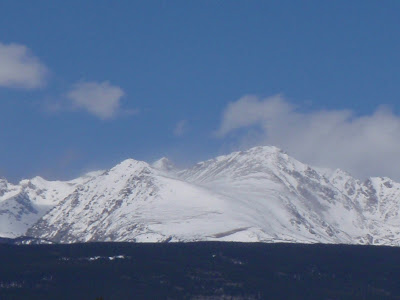 But, looking over my shoulder to the east, I saw that the up-slope snowy weather advancing up the gulches. It's time for spring, not snow - someone please tell the authorities! 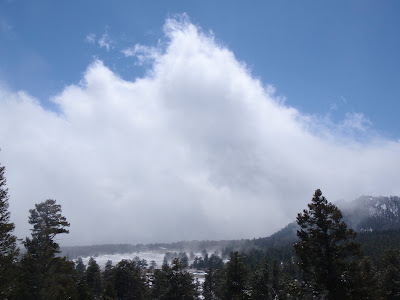 Something about fresh snow sends young dogs into a joyful and frolicking mood. My dog trainer says that fresh snow is the one distraction that makes it almost impossible to teach a dog new tricks. Certainly, today, all K and R wanted to do was play, play, and play some more. I propped my bike against a tree and enjoyed the infusion of happiness and energy that I always get when I watch them cavort.

Watching the videos showed me that R has learned how to play with K. K is a sensitive girl who stops playing when R gets too rough, even when K's thyroid levels are normal. In the sequences above, R's exuberance is toned down one notch, and consequently, K keeps playing and playing. The video clips show only a fraction of their frolicking. I love seeing them becoming such good playmates.
Posted by KB at 2:17 PM