Half awake, I sleepily sipped my coffee, watching the bird feeders. A large brown form emerged from the aspen grove behind our house, ambling lazily toward our bird feeding station. He shuffled in front of our wildlife camera, triggering it to take a photo. He was so close that you can see the texture of his thick and downy fur. He's also fat, very fat, and looks incredibly healthy for a bear in early summer. Bears keep losing weight until July, according to my books. The berries and nuts aren't out yet, and the bears don't have the overwhelming urge to gorge themselves like they have in late summer. 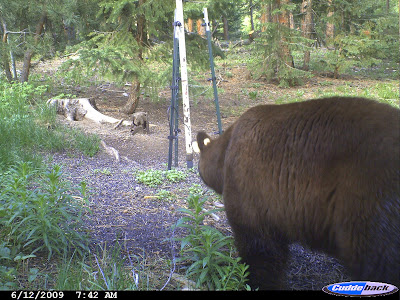 I noticed him shortly after the camera took his photo. I wasn't worried about him getting anything to eat. Our bear-proof bird feeding station has withstood five years of bears trying many ingenious techniques to reach the seed and suet.

He lumbered directly to the base of the feeders, and made a half-hearted attempt to reach the good-smelling food. In the photo below which I took through the window, the feeders hang from horizontal bars that tower 6' higher than the bear's paws. He is a tall bear. I'm 5'2", and he can reach slightly higher than I can. He stayed less than 30 seconds today. I know how brief his visit was because the wildlife camera takes a photo every 30 seconds while there's movement in its field. It took only one photo. 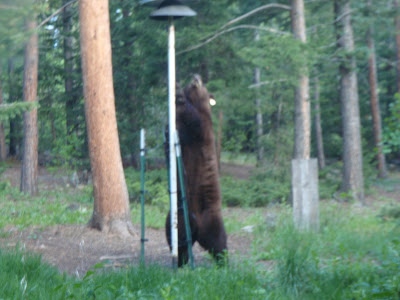 Based on how easily he gave up, I think that he's visited here before. In fact, I wonder if he isn't the same bear that visited on exactly the same date in 2005. 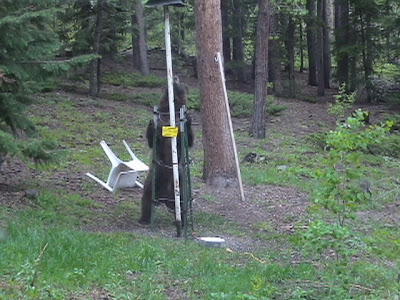 The bear who visited in 2005 was much smaller. Perhaps he was a yearling then. He spent more than five minutes exploring every option to reach our feeders, including climbing a nearby tree. He was unsuccessful. 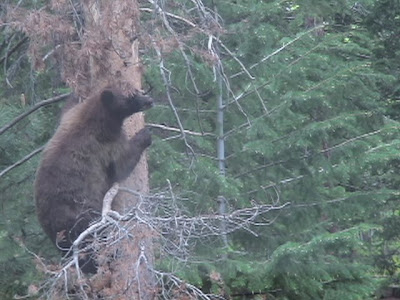 You also can see that the 2005 bear didn't have an ear tag. The ear tag in today's bear was very bad news to me. It means that he has one strike against him for behaving badly around humans - probably getting into garbage or breaking into a car containing food. I believe that the tag means that he'll be destroyed if he gets another strike. Please, if you live in bear country, don't leave garbage unsecured, bird feeders accessible, or your car doors unlocked. That last one might seem odd but almost every vehicle that contains at least faint food odors. Bears learn to open car doors but, if the door closes behind them, they freak out and destroy the inside of the vehicle.

The bear put a crimp in my plans for the day because I didn't want to take the dogs onto the trails knowing that the bear was nearby. So, I delayed for quite a while before venturing out. When we finally went out, the dogs initially freaked out, snarling and barking while starting to follow the bear's trail. But, they both returned, on a dime, when I called them. We practiced more recalls next to the bear's trail to teach them that they should heed me even when strong bear scent permeates the area. We didn't see the bear on our ride.

To avoid the bear, I headed away from our trail system right away, and we stopped at a different vista from usual, atop a boulder outcropping. It gives a unique view of our peaks. 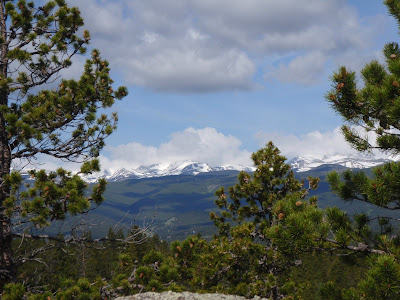 K looked dainty as she hopped from boulder to boulder. 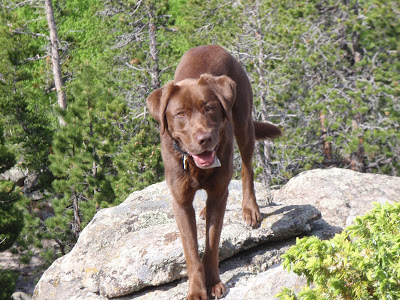 R looked stunningly handsome with the snowy peaks behind his jet black fur. 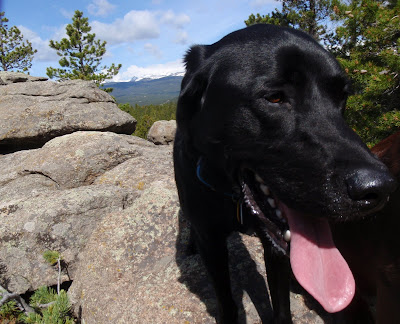 After dropping off the Lab pair, I visited our earliest blooming Columbine patch, and the delicate beauty that I noticed yesterday had opened to the sun. I love Columbines! 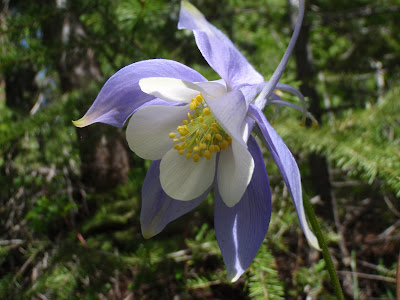 Although it felt like I was dodging storm cells throughout the whole ride, the mountains were shining by the end of my ride. 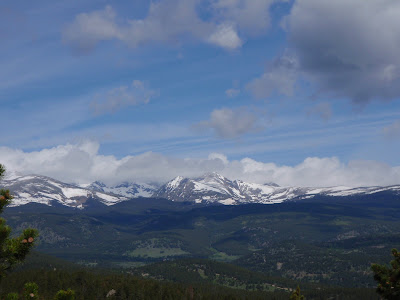 It's only mid-June, and I've already seen as many bears as I usually encounter over an entire season. I find each sighting to be amazing and captivating. I love living in the midst of wildlife, even if I have to delay my bike ride to accommodate them:). But, I have to admit that I was disturbed by the ear tag on today's ursine visitor because it's usually the fault of people who inadvertently leave accessible food outside, thereby making the bear associate human habitat with available food. I hope that we humans can help keep him safe so he lives a long life. So, be careful around bears ('bearful')!
Posted by KB at 9:30 PM