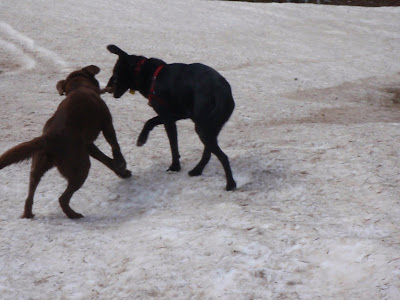 We returned yesterday evening, tired from a fun hike, and I craved sleep. However, despite the canines' raucous play on our hike, including wrestling on snowbanks, K and R kept exploding in ferocious barking, staring out the windows, and causing me anxiety. Previously, I'd get excitedly curious about what wildlife was outside when they alerted but, since our intruder incident, I get anxious. I tried peeking out the windows but didn't see much. So, we battened down the hatches to try to sleep. More bouts of barking and growling ensued.

Our wildlife camera gave us two hints about the canine overnight nervousness. First, a coyote hunted under our birdfeeders. That's an almost nightly event. 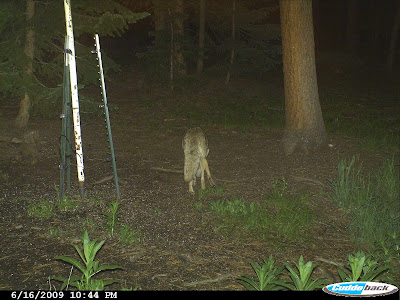 About two hours after the coyote departed, a bobcat sauntered through the camera's field. 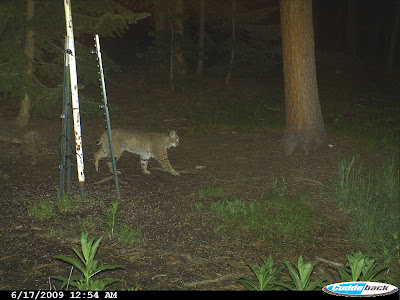 A close-up shows that he looks like a tightly coiled spring of muscular energy. His shoulders and haunches bulge with muscle. His front limbs look much bulkier than those of a coyote. His hind limbs appear cocked and ready to sprint or leap. Now, I can see in photographic form why the bobcat who silently sneaked just behind me while I examined a wildflower left me feeling so vulnerable. This cat looks powerful - although I'm fully aware that bobcats don't attack humans. 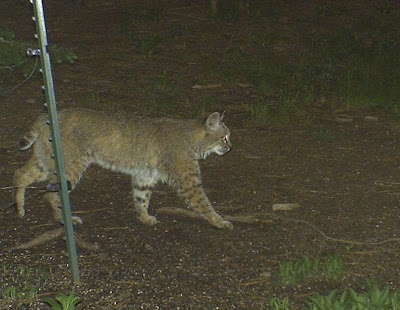 We've known for years that a bobcat visits the area under our feeders, and I saw him a few months ago as I started a pre-dawn wintertime mountain bike ride. I'm guessing that he hunts for mice and other nocturnal rodents foraging for seeds under the feeders. Now that I can spend some time looking closely at the bobcat, I'm not sure whether he or the coyote would win in a fight.

Early this morning, my husband and R started their trail run slightly before K and I rolled out. As I opened the door, K burst into more barking and snarling. Whew, I wondered, what's going on? Then, my husband and R came running back to house, seeming frazzled, just ten minutes after departing. They'd returned home to tell me to stay away from a certain trail.

As they'd run up a trail winding through thick green aspens and shrubs, they'd heard a rustling and then a growl. A hefty mama bear, jet black like a classic black bear, loomed in front of them. Almost simultaneously, they heard the scratching claws of a tiny cub rapidly climbing a Lodgepole pine. Finally, they saw mama bear hightailing it straight uphill, and my husband was almost certain that another tiny cub scurried just ahead of her. He's not sure if the mama bear directed the initial growl at him or at the cubs to hurry them to safety.

R behaved like a champion. He stopped in his tracks, perhaps because he was afraid when faced with mama bear, and my husband rapidly clicked his leash onto his collar. The two of them then retreated carefully, abandoning that trail to the bear family. I feel very lucky that I wasn't on my bike while trying to control two dogs in an encounter like that one. It had all the elements of a dangerous encounter: mama bear and two tiny cubs, dense vegetation preventing forewarning to either party, and the bear family getting separated.

Despite the drama, K and I did take a mountain bike ride, but I kept her in a heel (i.e., just to the side and slightly behind my bike) within about a mile radius of the bear family's last known whereabouts. Bears must be overwhelmingly smelly. K drooled and acted spooky for a lot of the ride. She'd relaxed a bit by the time we visited our favorite spot atop our trail system. 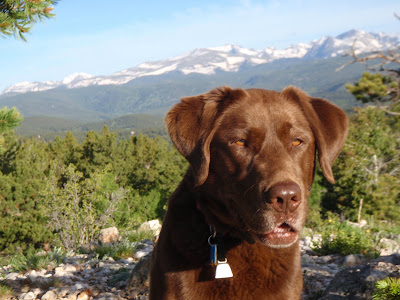 Because the day had dawned fairly recently, the snow on the mountains still had a slightly pinkish alpenglow and NO CLOUDS! We've had a paucity of clear mornings lately. 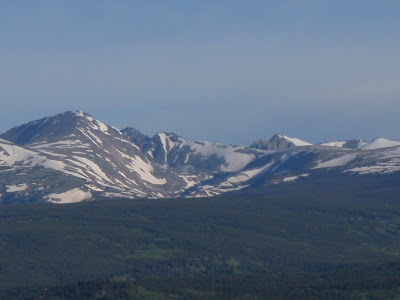 We found one bear digging during our ride, suggesting that our bears are foraging for natural foods, like ant colonies. A bear digging stands out unmistakably. They toss the dirt 5-6 feet, throw heavy rocks, and dig deep holes, usually under rotten stumps. A hole dug by a dog is nowhere near as dramatic. 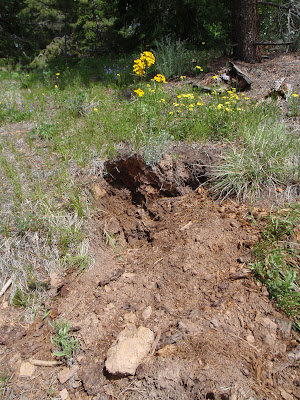 After I dropped off K, I rode up to a favorite wildflower ridge with never-ending views of the mountains. Oh, what a morning ride! 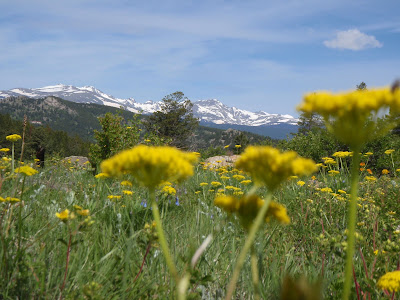