Boom! Furious barking. I awoke with a jolt of adrenaline at 3AM. A bear had just climbed a supporting pillar and vaulted over the railing of the deck off our bedroom, literally shaking the house. Once the dogs took up their ferocious guard dog roles, it sounded like the bear fled as fast as he could.

At some point during his reconnaissance of our territory, the bear wandered under our bear-proof bird feeding station, and our trusty wildlife camera snapped his photo. 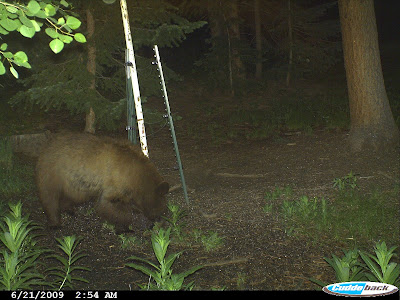 I think that he's the same bear who visited recently, based on his brown fur, ample fat layer, and imposing frame. 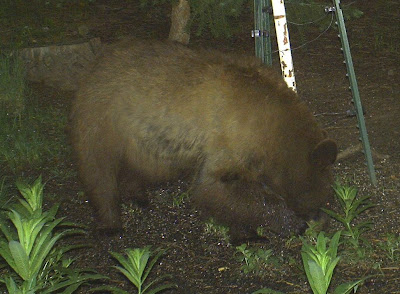 Last night, I don't know how long he stayed after leaving the deck. For what seemed like hours, the dogs continued to burst into frenzied barking and charge at the deck door, invariably just after I'd finally dozed off.

I was glad that we'd moved our bearproof garbage cans out from under the deck because they could have attracted the bear too close to our Cordilleran Flycatcher nest. I have no doubt that this bear will eventually investigate garbage cans, and he'd eat the Flycatchers' eggs if he found them.

Our flycatcher couple just started incubating their eggs yesterday. What that really means is that the female sits on the eggs, and the male sits nearby chirping out moral support. He doesn't even seem to feed her as she patiently warms the eggs. In this photo, the female's tail juts out from the nest. The bottom of our deck acts as a roof just above the nest. 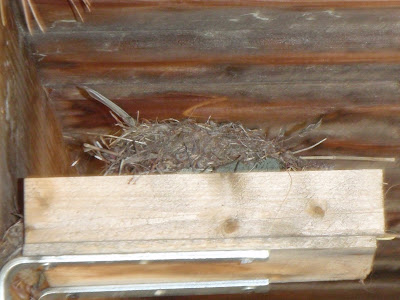 Although he doesn't incubate eggs or prepare meals, the male Flycatcher always perches nearby and harasses any dangerous animals, like squirrels or jays, who approach. He's also an agile bug catcher. This morning, I caught a moth stuck inside the house and released him from the deck. As the moth fluttered away, the male flycatcher swooped and snarfed him like a hawk snagging a small bird out of the air.

Today, K and I rolled out into a warm and happy forest. The deep blue sky changed the mood of the forest and mountains from dark and gloomy yesterday to lighthearted and festive today. Moreover, unlike yesterday, no animals lurked in the dark forest to make K or me nervous. We had a mellow ride, just floating along beautiful trails. 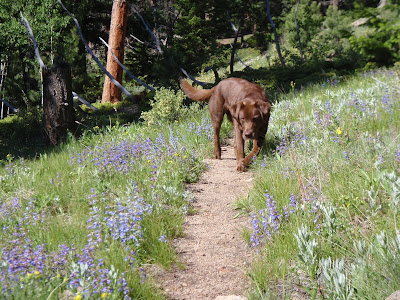 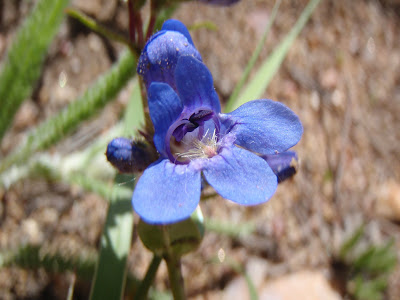 Near our favorite local peak, I noticed that some butterflies have arrived, about three weeks later than usual. I think that our cold and damp weather might have delayed some flower blooming and also deterred the butterflies. Today, a few white butterflies fluttered around the summit. At peak season, butterflies seem to swirl everywhere on this granite outcropping. 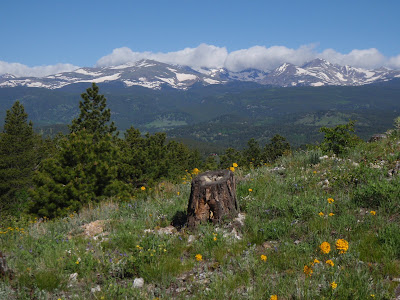 On the peak, a distinctive flower had just opened its petals - a Green Gentian (Frasera speciosa). This photo shows the top of a 2' tall plant. On its apex, a bud has opened into a full flower but many unopened buds adorn the lower stem. 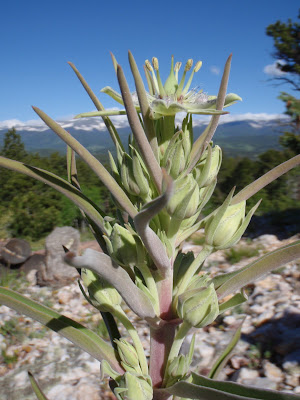 A view from above shows the green color of this odd flower's petals. Each petal has a purplish patch with a tuft of fine hairs. These patches are said to be irresistable to insects. 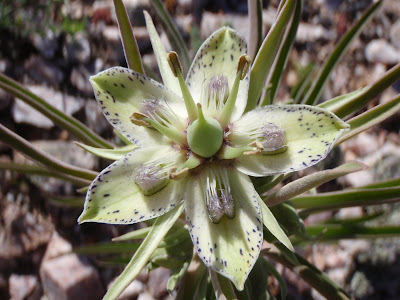 The sideview shows the five stamens with pollen-filled anthers topping them. The central green bulb is the pistil, the female reproductive organ that produces seeds once pollinated. Green gentians live two years, and only reach their full glory, with many blossoms adorning their tall stem, in the second year. 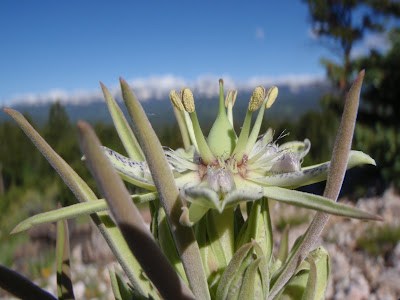 Apparently, the Navajo believed that the leaves of this plant contained strength-giving substances. They'd grind up the leaves and rub the powder on the muscles of hunters and their horses before long expeditions. They'd also smoke the ground leaves to 'clear the mind'. I decided not to leave the beautiful plant intact today although 'clearing the mind' sounded attractive.

K sat soaking up the sun while I photographed the gentian - she doesn't share my flower fascination but always guards my back while I obsessively stare at them. Then, we rolled down the hill, and I dropped K off at home. I felt happy that we'd had a relaxed and fun ride after yesterday's tense one.

I headed out to my favorite wildflower trail. As I rode toward it, I heard a voice call my name from behind. It was a former neighbor who'd returned to our trails for a ride on this beautiful Sunday. We decided to ride together, catching up on a year of news and soaking up the views. It was gratifying to find that, unlike a couple of years ago when I could barely keep up with him, I now naturally ride at the same pace as my friend. Riding almost every day has made a big difference in my fitness although I'm rarely aware of it until I ride with someone else. It was a perfect Sunday ride. 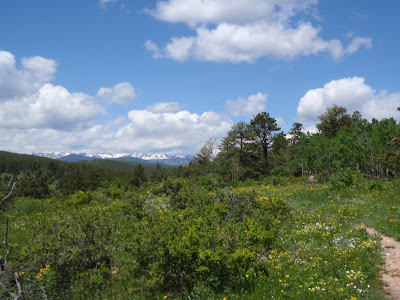