Yesterday warmed to almost 45 deg, even up at my elevation of 8200'. Overnight, the temperature dropped precipitously and the trails froze solid. I started my day on the trails behind my house, riding with my chocolate lab, K. With a temperature of about 22 deg, conditions were ideal -- cold enough to keep the trails solid, sometimes sunny, and not windy. We had 75 mph winds two days ago so I was reveling in the still air. I rode some new trails that I hadn't yet attempted since the snow started accumulating, and I was amazed to find that I was floating over the snow. 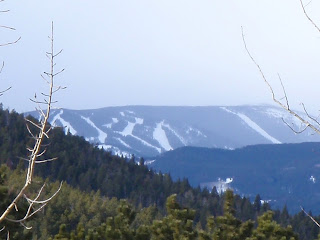 K and I stopped at a lookout point to contemplate our local ski area where there recently was a tragic shooting. 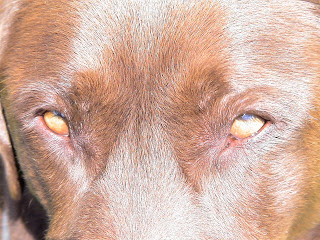 After more than an hour of riding our local trails with K, I dropped her off at home and decided to go try to ride some of my favorite summer trails. The first one is a mile-long connector that simply bypasses some road riding but has incredible wildflowers, including columbines, in the summer. I was able to ride about three quarters of it, but it was tough going because no one else had traveled it since the last snowfall.

Next, I headed for a trail network that is used by ATVs in the summer but is closed to motorized use in the winter because our local elk herd likes to spend a lot of the winter there. This area is also known for regular mountain lion sightings. Indeed, I saw a cougar cub there a few summers ago. It was lying in the sun while its mother was doubtless off hunting. My friend and I stood staring with amazement as the cub looked back at us. At the same instant, we both said 'Where's mom?'! We carefully looked around us and left the area. Seeing that cub was magical but I am always looking behind me when on those particular trails. 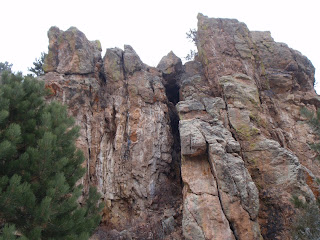 The picture above shows the section of trail deep in a gulch that gives me the strongest feeling of being prey. These cliffs are on one side of the trail while a creek and an extremely steep uphill slope are on the other side.

I actually love that we have lions here -- that we humans are not at the top of the food chain. We have a couple of casualties in the neighborhood each year. Last year, a neighbor saw a lion carry off a dog who was sleeping on a high deck, and another neighbor had a mini horse killed by one (and saw the lion feeding on it). I see them a couple of times a year on average and I haven't yet felt like one was threatening me. Then again, it's the ones that I don't see that are probably the biggest threats. 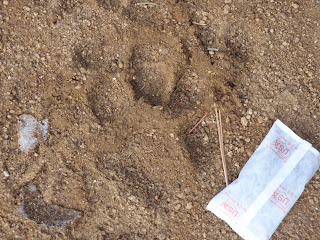 In one section where the snow had melted, I saw the track above. It caught my eye because it is as wide as it is long, and I didn't see nail marks. However, now that I look at it with my chemical handwarmer for scale, it doesn't look big enough to be an adult lion. I've seen far bigger tracks in the past.

I felt like I was flying on the gulch trail. It was well packed and my studs were giving me great traction. 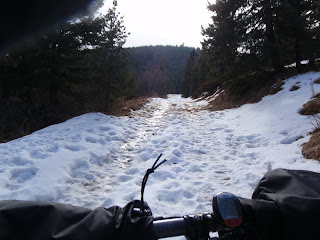 At one point, I saw a coyote in the middle of the trail ahead of me holding what appeared to be a good-sized rabbit in its jaws. The coyote galloped up the hillside, looking over his shoulder at me occasionally. I felt badly for the dead rabbit flopping in his jaws but at least the coyote was going to have a good meal.

All in all, a great day on the trails. I was able to navigate a lot of summer trails despite my relatively 'skinny' tires. The great news is that I have a snow bike on order that I'll be getting near the end of January. It has 80 mm rims that will open up even more snowy trails to me!
Posted by KB at 2:28 PM