Raining mushrooms on a windy day 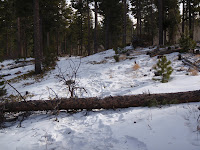 Yes, a bike is a 'lightweight vehicle' (see post earlier today). I rode but mostly on unexposed trails. I still swerved around like a drunken rider, and on the snowier trails, I often got blown into the sugary snow along the sides. Staying on the 'protected' trails meant that trees surrounded me, and I saw firsthand that trees were dangerous today. I passed over one section of trail early in the ride and then again later. In the interim, a tree fell on my tracks. 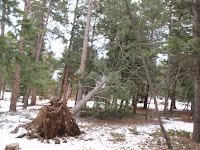 As further evidence of the danger, a tree was uprooted by the wind on our property while I was riding.

I met two people while I was mountain biking who I'd never seen before. They seemed to think that I was nuts. One said, "Are you OK?" (I'd just put a foot down so that I wouldn't be blown into them.) I told her that I was fine, and she looked at me very carefully as if she was trying to decide if I was telling the truth. She must have decided that I was - because she told me to "have fun" and kept hiking.
My dog, K, joined me for most of the short ride. She's always been a little afraid of strong winds. You can see below that she looks happy during a brief lull and not so happy during a gust. 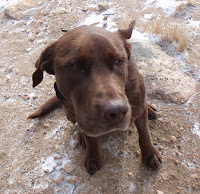 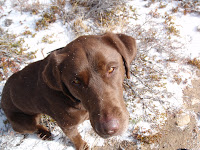 One thing that K likes about the winds is that they blow down mushrooms that the Red Squirrels have carefully hung in the trees to dry out for winter food. I learned of this when I was hit by a falling mushroom while lying in a hammock below some pine trees. I took out my binoculars and saw a number of mushrooms carefully wedged in the crooks of branches. I then read that red squirrels have the peculiar habit of hanging mushrooms in trees to dry. The mushrooms that they dry aren't poisonous. K discovered that she loved eating them within the first year of her life. It worried me so I tested whether she was interested in our most common poisonous mushroom, Amanita muscaria, and she backed away from it like it was, well, poisonous. This test eased my worries but we still worked on training her not to eat mushrooms.
Unfortunately, that's not the end of the story. We went on a camping trip on the western slope in Colorado one August. To make a long story short, K secretly ate poisonous mushrooms 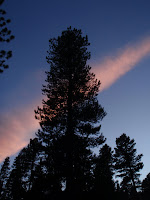 during one of our hikes. We thought that we'd trained her not to eat mushrooms but we'd actually trained her not to eat mushrooms when we were looking. She darn near lost her life.
Today, as I tried to avoid being blown to Kansas, I also tried to watch K and prevent mushroom eating. Now, that was a challenge unique to mountain biking with my idiosyncratic dog.
Our day ended with a short hike on our trails as the sun set.
Posted by KB at 2:27 PM