Today is 'give your dog a hug' day in our pack. A visiting friend rushed back home because his dog had collapsed. The vet found a very large splenic tumor, and surgeons are removing his spleen today. We're hoping, against the odds, that it's not hemangiosarcoma. Our friend found his dog, Julius, almost 12 years ago tied up next to a freeway in California. Julius's life to that point obviously hadn't been easy but they've built an incredibly strong bond.

We've had a brush with this awful cancer but we evaded it. Our dog, S, had emergency surgery for an intestinal obstruction. While he was on the operating table, we received a phone call telling us that he had tumors on his spleen and liver. The surgeon was 90% sure it was hemangiosarcoma. Regardless of whether he removed the cancer, the vet thought that S's survival odds were low. But, in a 2 AM surreal moment, we told the surgeon to remove S's spleen and the tumor on his liver. That morning, I started wearing a Livestrong wristband in S's honor while we awaited the biopsy results. After the longest 3 days ever, we found out that it wasn't hemangiosarcoma. For once, we beat the odds! The tumors were another rare, but not too aggressive, form of cancer but the surgeon believed that he'd excised all of it. Today, 20 months later, the 13.5 year old S is still happily with us, and I'm still wearing my wristband. We know how lucky we are to have S with us.

Today, my dog friend, K, and I loved our time together on the trails. She ran along side me acting relaxed and happy. She mock-chased a squirrel - she learned a long time ago that she won't actually catch a tree squirrel but seems to think it's her duty to give chase. Then, we stopped at a viewpoint, and I tossed her treats. I had fun trying to capture photos of her snarfing the treats out of the air. In the photos, she's initially intent on the treat that I'm holding, and then her jaws gape as the piece of cheese, visible in the photo, falls towards her mouth. I'm amazed by the eye-mouth coordination involved in this trick! 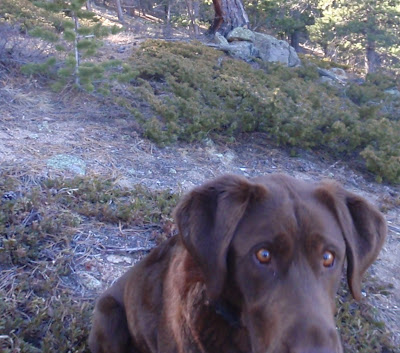 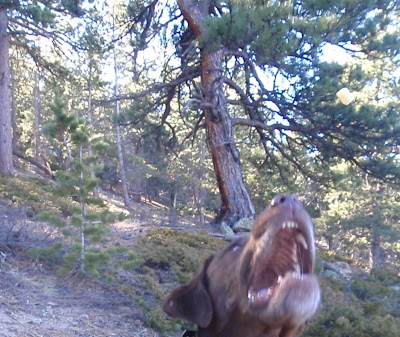 The weather was perfect today so I decided to try a 'summer-only' loop that involves almost no roads but goes through a variety of beautiful country. Amazingly, or scarily, depending on your viewpoint, almost the whole loop was rideable. Only the steep north-facing slopes reduced me to walking because I couldn't get traction to climb up them. 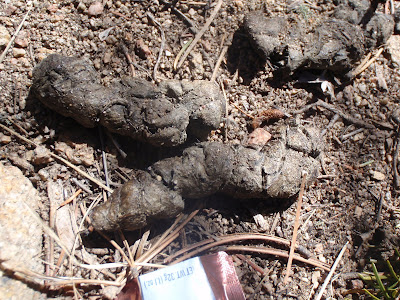 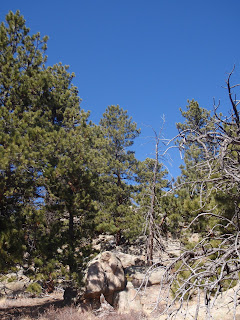 Early in the ride, I almost ran over some mountain lion scat. Like last time, it fit all the criteria for size and content (lots of fur and a few bone pieces). The visible edge of my energy gel package is 1.5" so this scat totaled more than 9" in length and more than 0.75" in diameter. Based on a book called Cougar by Keven Hansen, this trail navigates through classic Front Range cougar territory, with large boulders strewn between Ponderosa Pines and Rocky Mountain Junipers. Moreover, it bordered a vast meadow. Radio collar studies show cougars favor this terrain, probably because the boulders provide great hiding places and their prey, mule deer, like 'edge' habitats between meadows and forests.

In reviewing the literature, Hansen points out that mountain lions have two distinct travel modes: 1) straight-line travel from one hunting area to another, and 2) zig-zag searching movements through a hunting area. Lions traveling longer distances almost always use drainages (gulches) or ridges, which might fit with the fast-moving cougar who I saw streak along a gulch. The tracks that I've seen recently near my house definitely fit the zig-zag hunting mode - it makes sense because the lion was moving through an area where a small herd of deer almost constantly hang out.

Hansen uses the literature to bust the myth that mountain lions patrol their territories on a regular schedule. Apparently, this is a totally untrue story told by lion hunters - the radio collar data don't support it. Lions follow their prey throughout their territory with little pattern to their movements except that they stay near elk and deer.

Reading this book is part of my 'educate-myself-to-reduce-my-fear' approach. It usually works for me - and today, I didn't feel worried. However, I did jump out of my skin when a large tan dog sprinted to me from behind - so maybe I was subconsciously worrying.

As I rode this loop that's so familiar to me in the summer, I noticed a view that I've never really seen before. It's interesting how carrying a camera in my pocket has made me see the world differently. I don't zone out so often but constantly look around me with a keen eye. 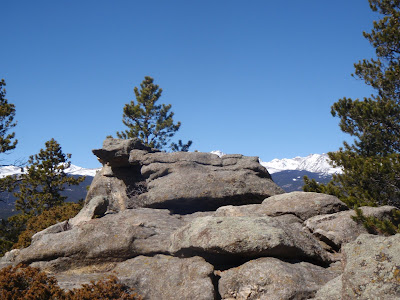 First, the snow-white bordering this boulder pile caught my eye so I climbed off-trail toward the top. 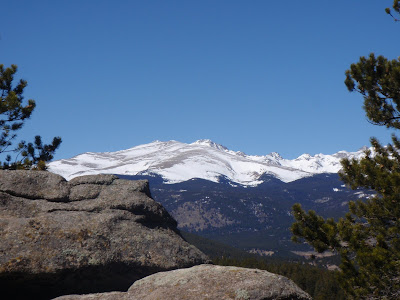 Once, I arrived nearly atop the boulder pile, the mountain view opened up. It was worth leaving the beaten path. 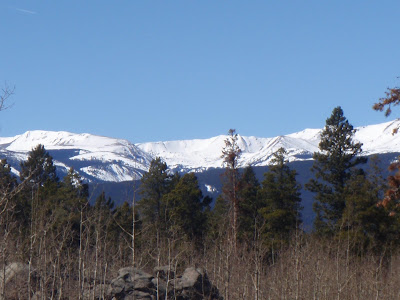 When I shifted my view to southward, yet more resplendent mountains! 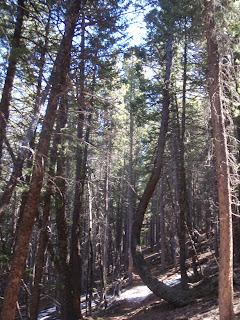 I climbed up a very steep trail through pine forest, and invisible ice lurked under the pine needles. I felt my wheels lose traction, and put my foot down. Bad idea. My foot slipped too, and bike and almost fell sideways down the steep slope that the trail was cut into. No injuries but a lesson learned. It happened just to the left of the amazingly curved tree in the photo.

At the top of the climb, I emerged onto a a meadowy ridge where I saw mountain bluebirds and a coyote. And, I almost forgot, another amazing view. I am so thankful to have such a beautiful world and loving human-dog pack around me. 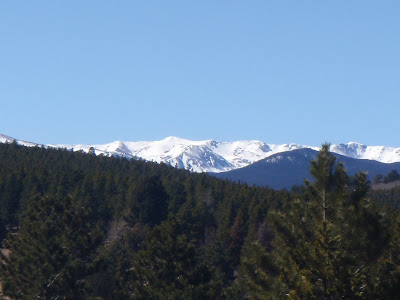