We're trying, very hard, to get out of town for our first trip in almost a year. We have a wonderful camping van, a Sportsmobile, that we'll use for the trip. We planned to leave on Sunday. My husband drove the van to town last week for servicing. Then, on Saturday, he tried to move it down our driveway to the house for loading. Everyone's worst nightmare happened - the brakes failed. We have a semi-circular driveway that's all downhill - a great feature in the snow - but a terrible feature when driving a runaway van. He managed not to crash through some quick thinking and good luck. I hate to think of the horrendous consequences if the brakes had failed as gravity pulled the van down our road - it drops 3000 ft in 5 miles. Now the van is in the shop - and each day something goes wrong in the process of getting it fixed. So, we still have no van.

The upside is that I had a blast riding my bike today. K's energy is burning like a supernova again. In contrast, I woke up feeling lousy, with an unhappy lower back, from being on my feet for too long packing for our trip. But, K led me out the door like an unstoppable freight train. K and my other dogs keep me going when I want to pull the pillow over my head and give up. Their undying hopefulness that today's going to be an awesome day tugs at my soul and gets me going. They're almost always right - going out to play in the woods is a joy. Today, like usual, easy spinning made my back pain ease up.

This morning, the sun behind the clouds made a streaked backdrop for our meadow. 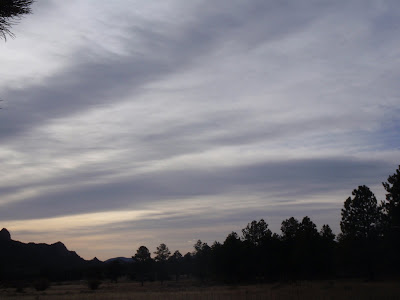 And, the turbulent clouds highlighted the starkness of the leafless aspens. 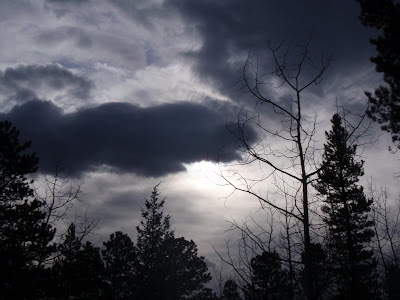 K and I saw the same group of deer three separate times on our ride, and K wasn't as reserved about them as yesterday. 'Leave it' wasn't sufficient to tear her away from a chase - so I went to a full-on recall and then put her into a heel for a while. I'm amazed the boldness of the deer around K. Perhaps these deer know her and that she doesn't truly chase them.

The sun burned through by the time we made it to the top our world. Here, I'd just called K back from a foray after the deer herd. Then, she decided to hide in a juniper bush to watch the herd while I took photos from the peak. 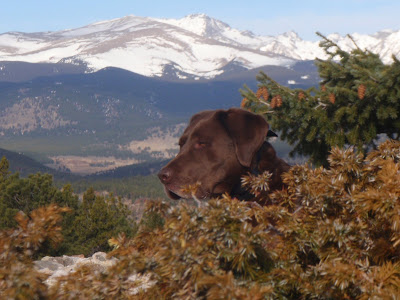 After I dropped K off at home, 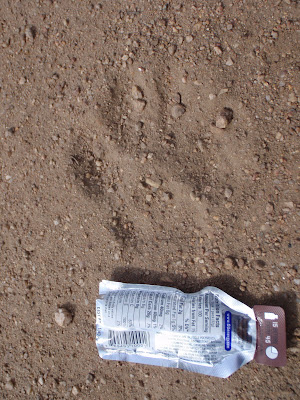 I headed up a dusty, sometimes muddy, 4wd road. I was moving

fast - when I spotted some tracks that made me skid to a halt. No human tracks were anywhere nearby but huge lion tracks briefly emerged from a boulder pile next to the road, followed the road for about 50 yards, and then dove into the forest on the other side of the road. By themselves, the tracks don't look impressive until you realized that my energy gel packet is 4" long. So, this track was about 3.5" long and wide, and it had no claw marks. The track pattern indicated a lope - a slow rotary gallop as the cat moved along the open road. I bet that he was hurrying to minimize his exposure along the road.

Later in the ride, with the lion tracks on my mind, I felt a little nervous as I rode up a willow, aspen, and cottonwood choked gulch but arrived safely at the top to a mountain view. Amazingly (to me), I was riding a heavy bike with studded tires with a mellow attitude but my time up the climb was only 2 minutes longer than my best for last year. 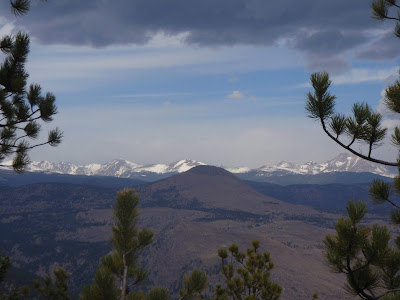 From the viewpoint, I dropped like a rock rolling off a cliff down to a trail that was drifted with deep snow a couple of weeks ago. Today, it was so melted that I rode all but about 50 yards of it. It's a favored animal trail because almost no people use it. I saw lots of bobcat scat, dropped into shallow depressions scraped out by the cat. It seems that a bobcat owns this trail.

As I rolled along this trail, I kept glancing out to the west for views like the one below and almost missed the big find of the ride! 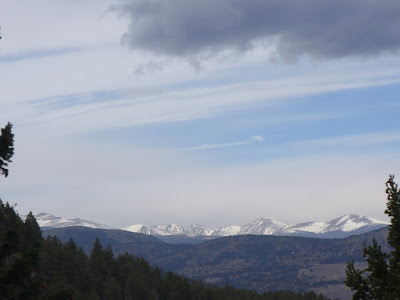 Black bear tracks! This trail is where I usually see my first indesputable bear signs each spring, and it didn't fail me this year. On a section with a thin layer of old snow, I noticed what looked like barefoot human tracks - until I looked closely. 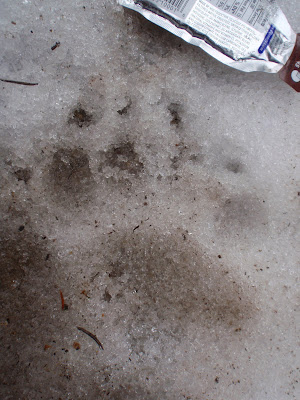 In the track to the right, you can see the five claw marks puncturing the snow ahead of each toe. Then, the human-like toe marks although the outermost toe (analogous to our pinky toe) doesn't show up in the photo but its claw does. Finally, the ball of the foot is obvious but the heel mark is faint. The faint and small heel mark indicates that this track is from a front paw. Some other tracks had deep undeniable heel marks but they didn't photograph well.

I've always guessed that this almost vertical northwest facing hillside would be a great denning place for bears. Few people ever explore it. And, based on my snowy adventures this winter, the elk, deer, and their stalkers, the lions, also stay away from it when it's snowy. That makes sense because there's too much snow for deer and elk to find food. I suspect that lions are the only animals who would attack a sleeping bear - so their winter absence is a boon to denning bears.

Sometimes bears wake up briefly and then go back to sleep, especially if the weather turns wintery. If they're awake for good, they start out in 'walking hibernation' - a time during which they stumble around like a human who hasn't had her coffee yet. They don't eat because their digestive tract isn't working yet. A little while after awakening, they dispense an 'anal plug' of dense grass and other dead plant material. I actually found a bear plug one spring - and it wasn't gross. It's just a scat-shaped dense cylinder of dead grass. Then, they slowly start eating and revving up their metabolism. Only time will tell if our bears are awake for good or if they decide to pull the pillow over their heads for some more slumber until their normal wake-up time of mid-April. In the meantime, I guess we need to turn on our electric fence that protects our bird feeders. The photo above shows a bear contemplating how to beat our bird feeder system. 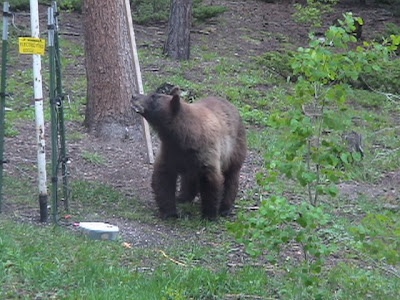 I love reading nature, finding signs, and figuring out what the wildlife is up to. So, today's ride ranks as a great one - just like last night's sublime sunset! 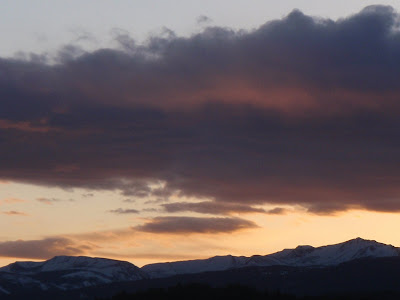