The weight of the wait 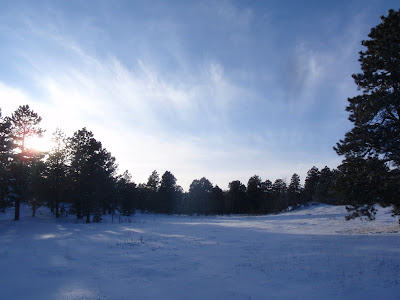 The weight of waiting has flattened my spirits. I'm starting to feel a glimmer of hope that S will be OK - that we're dealing with an infection and abscess rather than cancer - but I know that slides with little clumps of cells on them are sitting on a lab bench, waiting for someone to declare them guilty or innocent. It's hard to feel light-hearted while waiting.

Both K and R joined me for some snowbiking this morning. Joyfulness permeated their beings, especially after R sniffed out and then excavated a tennis ball from under a foot of snow. 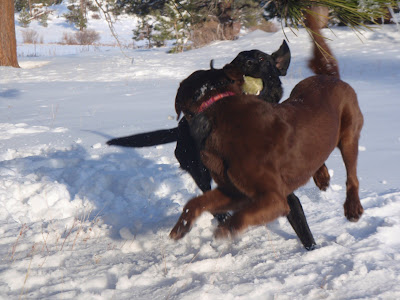 The mountain air was frigid and the snowpack was frozen solid. The Fatback is such a fun bike, opening up the forest trails to me in snowy conditions. It's not easy riding - I need razor sharp focus on the snowy trail to stay upright. Below, the trail stretches in front of me. But, as you can see, it's not much of a trail - a single snowshoer tramped through soft and soggy snow which then froze rock solid. For a snowbike, that means ba-bump, ba-bump, ba-bump, as each wheel sequentially falls into a track. Then, perfect timing of a hard pedal stroke gets me through the unpacked snow between tracks. I usually enjoy immersing myself in single-minded physical work but my enthusiasm was a notch below normal today. 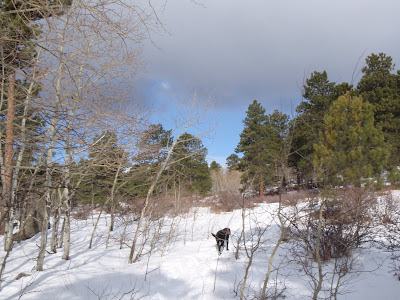 And, in keeping with my guarded mood, I found myself yearning for the freedom to go on long mountain bike adventures, like the ones just before my vacation, that are only possible when the snow melts. Once I stopped this thinking, I did end up enjoying my snow ride with my happy pups. 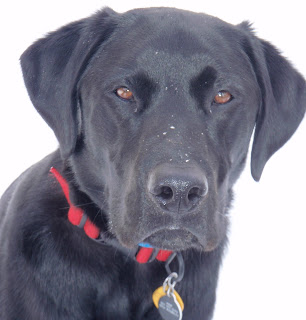 During a pause in our ride, I captured one of my first photos with R looking at the camera. I've been training R to like cameras by giving him treats whenever I point a camera at him (similar to the technique used by the Dog Geek with her puppy and loud noises). He now knows that a cascade of treats follows a photo so he stares at me intently when the camera points at him. The only problem is that he sometimes drools in anticipation of yummy morsels which isn't so photogenic. This image looks like an elementary school photo because R looks so darn serious. Treats are serious business for him! Prior to this positive 'camera conditioning', R invariably looked away from the evil camera eye that was staring him down.

The mountains have hidden behind a cloud wall since we returned home from vacation. 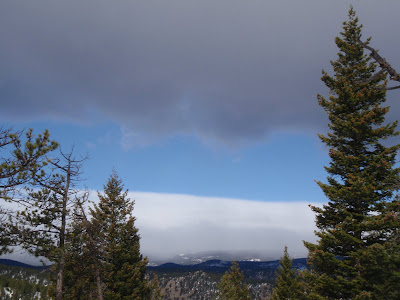 I've been surprised to see many deer and elk tracks despite the thick and crust-covered layer of snow. Perhaps they know that descending to lower elevations doesn't yield food after spring storms. Spring storms often are 'up-slope storms' that dump more snow on the foothills than on the mountains. So, heading down could waste energy without the benefit of better foraging. Below, the elk hang out on a forested hillside with snow literally up to their knees. Based on tracks and observing the elk in deep crusty snow, it looks like the herd crowds into a small area of meadow. Then, they trample and paw the snow until dry but edible grass pokes through. In past years, I've observed that coyotes wander through the unconcerned herd while the elk trample and paw the snow. I never understood why the coyotes would linger so close to animals that could injure them with one swift kick. Now I've read that the coyotes hunt for rodents, especially mice, on the ground exposed by the elk. Without the work by the elk, the coyotes can't break through the crusty snow to find their favorite prey.

Also, since returning home to deep snow, I've seen no carnivore tracks whatsoever. Their absence is odd after seeing their tracks on almost every ride this winter. I wonder what the bobcats, coyotes, foxes, and lions are doing. Did they move to new terrain after our big storm? If so, where did they go? Am I the only person on Earth who spends so much time wondering what the wild animals are up to? I probably am.
Posted by KB at 2:54 PM